Victoria will start taxing electric vehicle owners next year for every kilometre they drive in a budget initiative the state Labor government says will make road charging "fairer" for all motorists.

But Treasurer Tim Pallas says the $30 million expected to be raised by the new charge will be more than offset by $45 million spending to boost the take-up of electric vehicles, with charging points across the state and plug-in facilities in new buildings. 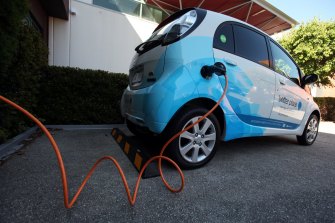 The transition away from petrol and diesel cars is aimed at combating pollution and climate change.Credit:Erin Jonasson

The government on Sunday will announce new spending on research and development grants for business and teacher training as part of Tuesday's state budget, as its political opponents ramp up the attack over "eye-watering" debt and deficits.

The state opposition says the Andrews government intends to borrow much more and run larger deficits than other states which have been hit hard by the coronavirus pandemic and that Labor has no plan to bring the budget back into the black.

Mr Pallas said on Saturday the budget would contain even more spending than the $14.5 billion already pre-announced, flagging "substantial" expenditure on his government’s signature big infrastructure builds and large sums devoted to social policy in the wake of the pandemic.

Mr Pallas must borrow at unprecedented levels to fund the spending, with net debt out to $86 billion and set to grow to about $155 billion by the 2023-24 financial year, and the budget deficit projected to soar past $23 billion in the 2020-21 financial year.

The Treasurer says the deficit would reduce to $13.1 billion in 2021-22, then to $6.7 billion the following year, predicting the economy would recover from the pandemic and government spending would return to "more normal levels".

"The trouble with this amount of borrowing is that Labor’s track record is that they don’t borrow to build, they borrow to waste, they borrow for budget blowouts and that’s what Victorian can’t afford," the Liberal leader said.

"Under these figures, Victorians will see an extra $20,000 in debt for every man, woman and child in this state."

The government’s new electric vehicle charge will levy 2.5 cents per kilometre driven by electric and other low emissions vehicles and 2 cents for plug-in hybrid electric models.

Mr Pallas said on Saturday he expected the charge to raise about $30 million annually, with the average motorist paying a "modest charge" of between $260 and $300 a year.

“When you consider that people who drive internal combustion engines, either petrol or diesel, those people are paying every day fuel excise,” the Treasurer said.

"If you’re not filling your vehicle up with petrol, then ultimately you’re not paying your share of maintenance costs of dealing with our road system, so this is essentially the government making it a fairer system that so that everybody pays their fair share of that wear and tear."

The revenue raised from the new charge will not be put back into electric vehicle infrastructure like charging points, Mr Pallas said, but Tuesday’s budget would allocate more than $45 million to pay for policies that boost the take-up of low emission and no-emission vehicles.

"We will more than offset the revenue that we get, so we will be expending more to make sure that we have appropriate charging locations for electric vehicles right across the state and we’ll also put in place arrangements to make sure our planning and our new buildings are all ready for plug-in electric vehicles," Mr Pallas said.

The state loans are designed as short-term finance to tide businesses over until the federal government pays out its research and development incentives, which are usually sent out after the tax year.

There will also be $15.5 million in Tuesday’s budget to fast-track training for teachers to take hard-to-fill jobs in the state schools system.

About 575 school and early childhood teachers are expected to participate in the scheme designed to help schools hire local educators to work in hard-to-staff roles in Melbourne’s outer suburbs as well as rural and regional Victoria.