When Yuh-Jung Youn took the stage at the 2021 Oscars to accept her Best Supporting Actress award for her role in “Minari,” the 73-year-old was radiant. Viewers wondered, could it be her skincare routine?

“She’s like the grandmother everyone wants to have,” her Hong Kong-based stylist Alvin Goh told The Post. “She doesn’t even know she’s funny, that’s the best part.”

On Sunday night, Youn became the first Korean actress to win an Academy Award. While accepting the Oscar for her role in “Minari,” she charmed audiences with her humble yet hilarious speech, referring to herself as a “mommy who works so hard” after calling out her A-List presenter: “Mr. Brad Pitt, finally nice to meet you — where were you while we were filming in person?”

Even in a deep navy dress by Marmar Halim, Youn shone bright amidst the lengthy telecast — but she didn’t plan it that way.

“She’s a very understated lady,” said Goh, who lovingly calls the star “YJ.” “She told me this and I’ll never forget it: ‘I do not need to stand out… I don’t need big jewels, I don’t need crazy clothes.’ 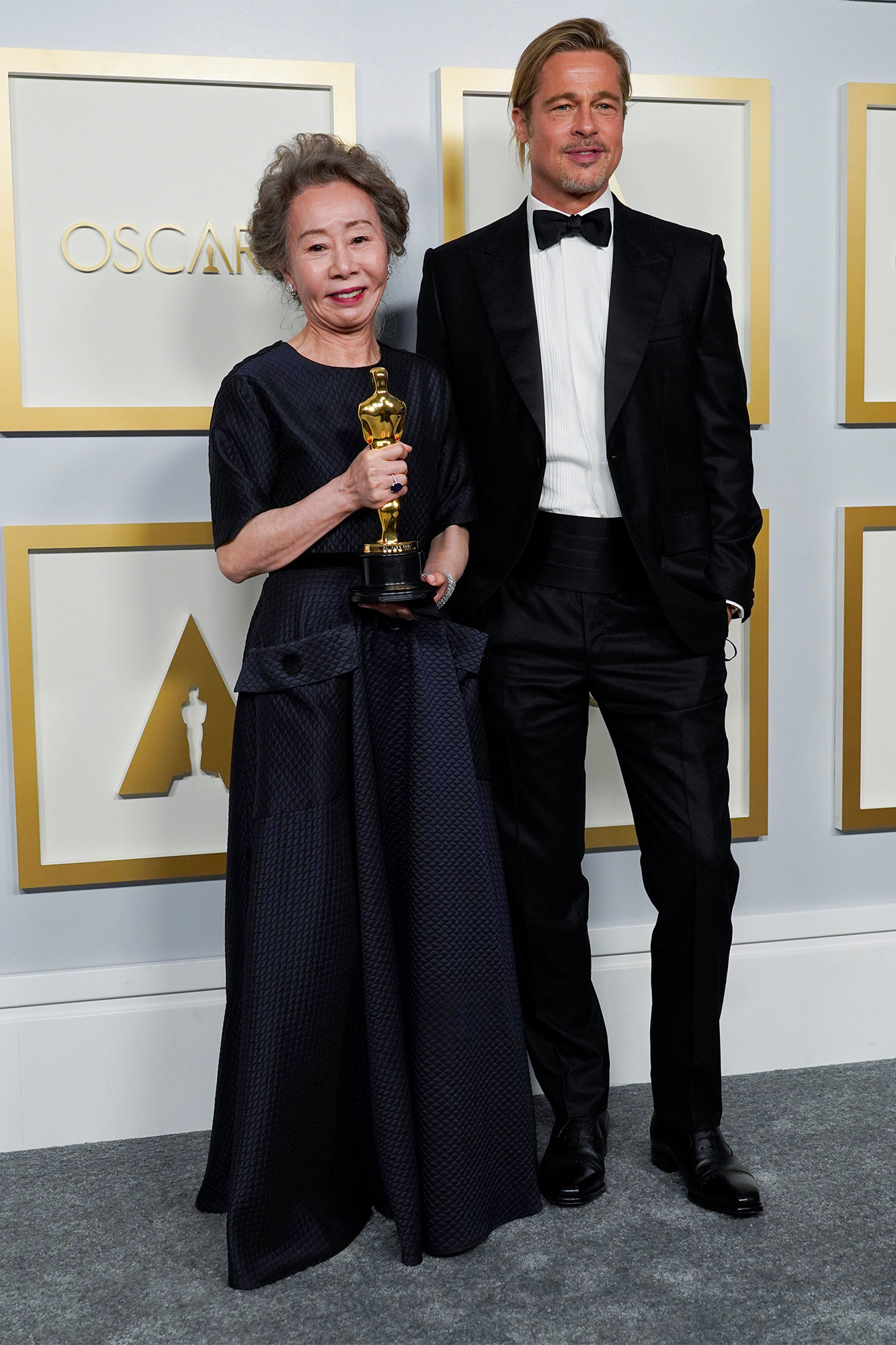 “I have never heard any celebrity say that to me… I’ve worked with a lot of big celebrities: Emma Watson, Tilda Swinton, Uma Thurman, Dakota Johnson, Margot Robbie,” Goh said. “So it’s shocking for someone of that level like YJ to say that; She’s been in this industry for more than 50 years!”

Indeed, Youn is a household name in Korea: Most recently she starred on reality show “Youn’s Kitchen,” which was spun off into “Youn’s Stay,” set in a Korean guest house.

Said Goh, “She’s telling me, ‘You have to come to Korea, I have to cook something for you!’”

Due to pandemic restrictions, Goh and Youn have never actually met in person and communicated primarily via Zoom. All fittings were done virtually; they first started working together for the SAG awards in early April.

Goh had “at least 250 outfits” at the ready for the Oscars, and they settled on a long navy gown by Dubai-based label Marmar Halim worn with Chopard high jewelry, Bottega Veneta heels (which are actually available for purchase) and a Roger Vivier clutch.

“I’ve been receiving non-stop phone calls… people wanted to pay her to wear the brands. And she is not into all those things,” he said.

Indeed, Goh remembers Youn trying on gems from “a big famous international brand,” and saying, “It’s too heavy, I don’t like it! I can’t wave my hand,” he recalled with a laugh. “She wants to be understated… she wants to be comfortable.”

The gown they ultimately chose “is very much YJ’s style– it’s the kind of silhouette she would normally wear,” he said. Plus, the fabric is light and versatile: “Whether she’s sitting down or standing up, it doesn’t crease, which is a plus for her,” he said.

“The moment she tried it she said, ‘I like it.” 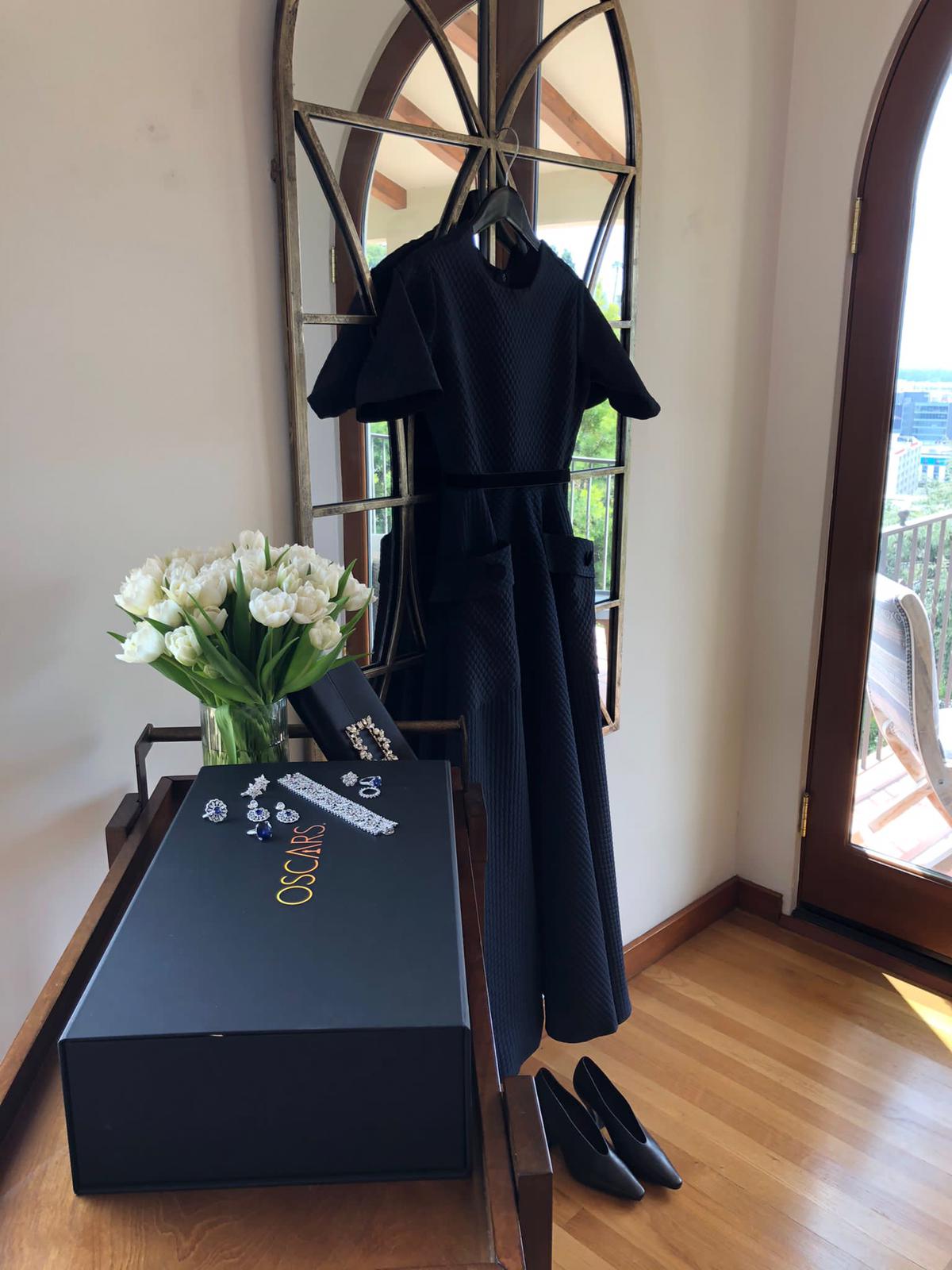 But they still wanted to give other glam garments a fighting chance and scheduled several video fittings, taking into account different time zones; Goh is based in Hong Kong, Youn has been in LA, and she has teams working in NYC and Korea.

Said Goh, “This is a true star, no drama, No drama, no nothing.”

In fact, they even toned-down the dress to match her low-maintenance vibe.

“The original design had panels inside but we took out everything; she didn’t want it to look too puffy,” Goh revealed.

“She’s not into the princess look. She wants to look age-appropriate — she owns her age.”