Home » Lifestyle » Opinion: NFL’s biggest question remains what will Tom Brady do? Pats QB might not even know

A little more than a week before the start of free agency, the NFL world continues to watch, wait and speculate about the future of its most decorated star: Tom Brady.

The quarterback faces uncertainty while preparing to test the waters of free agency for the first time in his storied, 20-year career.

Although he turns 43 in August, Brady remains adamant he wants to continue playing football. Where remains the only question.

Eight months ago, the Patriots and Brady failed to agree on a multi-year contract extension. Instead, they reached a pact that paid the quarterback a single-season career high $23 million for 2019 before voiding this offseason. The deal carried the stipulation that New England cannot use the franchise or transition tag to retain him in 2020.

FRANCHISE TAG PRIMER: Breaking down options for all 32 teams in 2020

NFL NEWSLETTER: Sign up now to get football news delivered to your inbox 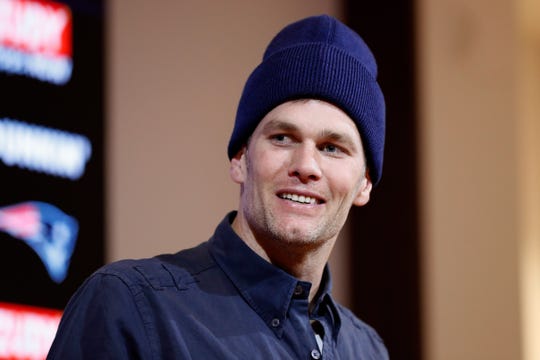 Now, Brady finds himself in position to dramatically change the landscape of the league that he has dominated for the better part of two decades. Or, he could opt to return to the Patriots, if they’ll have him, and gear up for one more Super Bowl run.

But until the middle of next week at the earliest, a suspense similar to that which accompanied LeBron James’ “Decision” in 2010, will continue to loom large.

Don’t expect Brady to reveal his move through a nationally televised production as James did. But if Brady does bolt, he could alter the trajectory of two franchises in James-like fashion.

With one move, he could elevate one squad to the ranks of Super Bowl contenders while leaving the Patriots to scramble for a contingency plan and franchise reboot.

As the March 18 start of the league year has drawn closer, the rumor mill has spun more furiously. Scenarios have included the Chargers — desperate to infuse a dying fan base with life as they move into a state-of-the-art stadium — luring Brady to his native state, even if for just a year or two.

Then, there’s the Raiders, also opening a new stadium as they move from Oakland to Las Vegas, and in need of star power to secure the spotlight.

And the Colts, who still need a top-flight replacement for Andrew Luck.

And the Bucs, who could elect to move on from Jameis Winston and his 30 interceptions.

And the Titans, who along with head coach and Brady buddy Mike Vrabel bounced the Patriots from the playoffs, but fell short in the AFC championship.

And the 49ers, who talking heads believe just might be able to seal the deal if they punt on Brady’s former backup, Jimmy Garoppolo, and turn to No. 12.

And, of course, there’s always the Patriots, who lack a true contingency plan at quarterback.

Despite all the buzz, it’s abundantly clear nobody really knows where Brady will go.

The NFL scouting combine doubles as the ultimate water cooler debate setting, and regardless of which crammed, dimly lit after-hours Indianapolis establishment you selected two weeks ago, you could always stumble upon a Brady-related discussion and unearth a different theory on his future.

But regardless of what “sources say,” no one really knows. Not even Brady. And he made that clear this week when he asked former Patriots offensive coordinator Charlie Weis to relay to the world that, “Nobody knows anything. So anyone who is telling you they know, they don’t, know.”

There’s still far too much sorting out left to do. Until the the pending players’ vote on the proposed Collective Bargaining Agreement takes place at week’s end, potential Brady suitors don’t even know what rules of business they will operate under in 2020.

And then there’s the matter of what teams actually appeal to the future Hall of Famer. Sure, the Raiders, Chargers, Colts, Titans, Buccaneers and Patriots may all have the salary cap space to afford Brady (although we don’t know his asking price).

But this decision is about so much more than money. It’s never been just about money for Brady. That’s why he routinely took less than he could have commanded during his time in New England.

So, a close examination of the handful of teams linked to Brady reveals that very few actually seem to check off all of the boxes.

The Chargers, Raiders and Bucs do not appear to be in real win-now mode. So unless he has a Jordanesque hankering for the challenge of transforming a losing team into a playoff contender in the twilight of his career, it’s hard to envision Brady settling on any of the three.

Indianapolis seemingly is a Brady-sized piece away from at least reaching the postseason. But does Indianapolis meet the location criteria?

San Francisco certainly would seemingly present Brady another legitimate shot at a Super Bowl ring. However, people within the league don’t believe that interest as anything more than wild speculation. San Francisco general manager John Lynch has been very public in his support for Garopppolo, who just completed his first full season and offers greater long-term upside.

And that’s why many league insiders view Tennessee — with its relationship ties, talented defense and a young, rising cast of offensive weapons — as the leading candidate to land Brady … if he leaves Foxborough.

To date, there have been few discussions between the Titans and the representatives of Ryan Tannehill, who helped lead the team to the playoffs, but now is a free agent. Meanwhile, Brady is definitely in Tennessee’s sights, according to two people with knowledge of the situation, who spoke on condition of anonymity because of the sensitive nature of the deliberations.

But although Tennessee seemingly has a lot to offer, going there does still mean starting from scratch for Brady. And although he appears to be enjoying the speculation about his future, he certainly could be using the suspense to create greater leverage, and also ensure that New England retools an offensive side of the roster than was sorely lacking in difference-maker talent last season.

It’s unclear how quickly Brady will reach his decision. Will he embark in a grand tour, or quietly ink a deal just after the open of business?

Either way, he’s the big domino that will fall first in a quarterback market that features great intrigue.