On multiple occasions over the last few weeks, President Trump has envisioned an autumn where football stadiums across the country are jam-packed with fans just like they always were, signaling a return to normal in America after the COVID-19 pandemic ends.

More realistic, that’s for sure.

As opposed to happy talk from the president that seems more rooted in magical thinking than the current course of the virus and the obvious ways in which life will need to change for the foreseeable future, it was refreshing Monday to see the Miami Dolphins publicly discuss contingency plans that would limit crowds to 15,000 and make other significant changes to the game day experience to account for social distancing.

NFL NEWSLETTER: Stay up to date with the latest league news and insight 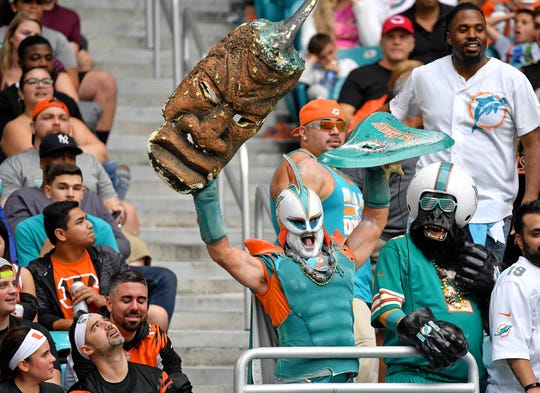 In an interview with "Good Morning America," Dolphins president Tom Garfinkel outlined a number of ways in which attending football games might look different for the time being, including new processes for ingress and egress, cleanliness measures for the building and a system for concessions where food would be ordered from a seat and picked up rather than people waiting in lines.

“When our fans, players and staff are able to return to Hard Rock Stadium, we want them to have peace of mind that we’re doing everything we can to create the safest and healthiest environment possible,” Garfinkel told ESPN.

More of this, please.

Amidst all the talk over the last two months about when sports are coming back, not nearly enough has been focused on the how — including plans and procedures for games that could include some fans, if not full capacity stadiums.

But in some ways, that’s going to be the most important part, especially if we accept the assumption from leading epidemiologists that we aren’t really going to be back to a full “normal” as a society until there’s a cure, a vaccine or some type of herd immunity — none of which seem likely to be achieved by football season.

What seems like a more rational approach is figuring out the middle ground between how we spent April and a full return to society, with everyday things starting to come back in limited ways depending on local conditions.

But when it comes to sports or other large-scale spectator events, we need to be realistic: There are almost certainly going to have to be significant changes and stringent procedures to do them safely.

And that doesn’t mean just the so-called “bubbles” that people have speculated about this summer for the NBA and MLB seasons — ideas that are, at best, a short-term band-aid and face huge logistical challenges to pull them off.

More likely is that we’re going to be spending much of this year assessing risk in all areas of life, knowing that the coronavirus isn’t going to be completely gone but all of us doing our best within some well-defined guidelines to not spread it. And that idea will ultimately have to extend to sports, too, because no league can operate in a bubble as a television-only product over the long haul.

Again, nobody knows exactly what will happen over the next few months. For now, the NFL and college football should proceed as if their seasons will start on time with room to adjust if necessary. But even in the best-case scenario where the virus has receded to a significant degree, it’s hard to envision any football stadium in America this fall being jam-packed with people pushing and shoving their way through concourses and breathing on each other for three hours in seats that barely give people an inch of personal space on either side of them.

Think about that especially in a college football context where a game at Alabama is going to have hundreds of people driving in from cities like Atlanta, Nashville and Memphis in addition to Birmingham and Mobile, making it the kind of “super spreader” event that could increase the risk of new outbreaks in multiple places.

That’s why the Dolphins should be commended for admitting that they might have to cap attendance at 15,000 and going public with their plan, even if they ultimately don’t need to use parts of it. In fact, every team and league and event needs to start crafting these policies and preparing fans for how watching live sports could be achieved in the new normal.

If you want to come to a game, you have to wear a mask. People are going to be sitting staggered every few seats. You’re going to have to pick up your beer at a specific time. You won’t be able to leave in the middle of the fourth quarter to beat traffic but rather exit when your row is called. These would be big changes, but they’re honest proposals — and much more realistic than the idea of 110,000 people in the stadium for Alabama-LSU this fall.