For years, the Safeway on Collingwood’s Smith Street has been a glorious intersection of people from all walks of life. Bankers and beggars, high vis and high fashion, owners and renters, locals and blow-ins, young and old alike – most people frequent the supermarket. 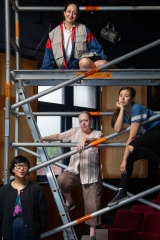 It’s an idea that inspired playwright Michele Lee when she was doing intensive research thanks to the City of Yarra's Creative Yarra program. During the process, she interviewed older women in that area about their lives. The result is Single Ladies, which premieres at Red Stitch this month. It is directed by Bagryana Popov and stars Jem Lai, Caroline Lee and Andrea Swifte.

Known for her novel Banana Girl and her plays Going Down and Rice, Lee has moved the action down the road, to outside the newish Coles in Smith Street. It revolves around three women, inspired by a friendship between one who is middle-aged and retired and another who is homeless.

Unlike many of her works, Lee didn’t start with a story or characters in mind. She had received a grant to research a project relating to the City of Yarra and chose to focus on women of a certain age.

“I was interested in older women and the city, women that are close to the end of their working life and have retired and have a longer history with that neighbourhood,” she says. “As I get older, these women who are a generation above me [interest me], I guess because I am heading there.”

“There is a level of invisibility in a city like Melbourne. Generally the thing that comes to mind first is not an older woman. I think I was attracted by the kind of stories and people that you might not expect.”

The two women who drive what she calls “this buddy story” don’t have a shared history but they share a space in common. One is anti-development and new Collingwood and the other is less political and not opposed to proposed changes. Lee says she is interested in exploring how the women connect.

Some parts of the show are tender and poignant, others are pure entertainment. “Often I find the things I thought were funny in my head, they’re often not the things that are funny when they are delivered.”

Each character represents a different wave of migration. Anne has an English background, Lilika Hungarian and Rachel Chinese.

"All of them have lived their life in Australia and [their cultural heritages] span those waves of migration who can speak to different versions of what we think of as those inner-city boroughs," says Lee. "Their families have arrived at different times, they bring different perspectives … they’re spiky with each other."

Lilika sounded quite hilarious in Lee's telling. "[She] is kind of that person you might have at a BBQ or a dinner party who will complain or contest everything… She’s the one that will always be strident … she alienates people."

Anne is a bit older and more understated; she has a stoicism and a pragmatism about her. Because she is a millennial and she’s still in the aftermath of a break-up, Rachel is in need of help. "Her character is really in need of these two random older women, more than she realises."

The play explores the language around being single. Even today, when there are greater numbers of older single women than ever, the prevailing assumption seems to be that it is only ever fun for young women.

Lee says that while the tone of the play is not overly celebratory – "f— men, f— relationships" – it’s not victoriously single. "The underlay is there are still disadvantages to being a woman, a single woman in an expensive neighbourhood. There’s that gendered aspect, financial vulnerability and not having those networks you had when you were married."

Not surprisingly, the older characters are more self-assured, especially with regard to their independence. The younger one, having recently come out of a full-on relationship, is still in a state of protracted grief. "She’s not really ready to contemplate the strength you can gain from being by yourself. She’s the one who most needs to make friends at the end of the day."

Developed through Red Stitch's Ink program, set up to help Australian writers develop new works, the play has been several years in the making. Working together with the theatre company and its ensemble has been invaluable, says Lee.

It enabled her to tap into their skills and experience in dramaturgy, script and production; meeting for a day or two to read through drafts with the actors, to have them "ask more curly questions about my own blind spots with the characters or the story or the world". Sometimes throughout the development process it was staged in front of an audience.

It's the kind of critical development process that in other parts of the world is mandatory before a play is staged and addresses the criticism made about some new pieces performed in this country – that they are not worked through holistically enough.

"They could all lean towards caricatures, that’s the danger in writing comedy. It could fall into the trap of being an argument about gentrification. Really skilled actors make me feel assured that we’re not going to run into cliches and caricatures."

The title conjures Beyonce’s song of the same name, a massive hit just over a decade ago, which instantly conjures images of young women, happily single, dissing their former partners for getting jealous and missing their chance at a relationship. Lee and Red Stitch tried to get the rights for the song, to no avail. She likes the idea of the older characters doing "that infamous dance" in the video clip.

“The spirit of that song, critiquing [it] in some ways. It celebrates a certain type of empowerment – it's still connected back to value through matrimony, whereas my characters are quite untethered from those things.”

Lee’s play turns those assumptions on their head. “[It’s] deliberately cheeky in that the city can be equally a dangerous place for women but also a place of opportunity… I knew at the start that it’s not a story about hens night or a girls night out in the CBD. Not what we generally imagine when we think about single ladies.”

Single Ladies is at Red Stitch from March 19 til April 21. redstitch.net