The Nationals need a pound of flesh to cut a deal over net zero emissions and on Tuesday the NSW government showed their federal Coalition colleagues how to give it to them.

NSW Nationals leader John Barilaro said last year that his government’s commitment to decarbonise the economy by 2050 would mean the end of mining and agriculture. But now he’s not just locked in behind the 2050 goal, he is committed to halving the state’s emissions as soon as 2030 – matching the pace of the most ambitious plans around the world, like in the US and Britain. 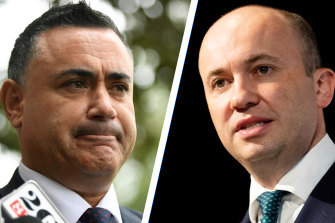 NSW says its emissions reduction drive will attract about $12 billion of investments across the economy by 2030, with two thirds expected to flow into regional communities.

“Whether it is in modern manufacturing, minerals or agriculture, regional NSW is home to the skills, infrastructure and resources needed as the demand for low emissions technologies like batteries and hydrogen grows,” Mr Barilaro said.

The federal government does not enjoy the consensus of NSW. The Coalition is split between several hardline Liberal MPs and a hatful of Nationals who oppose Prime Minister Scott Morrison’s net zero push.

Mr Morrison is wedged and it remains to be seen if he can move the policy forward ahead of the United Nations climate summit in November. He’s caught between the Nationals, who are split over net zero and the potential pain it could cause in restructuring regional industries, Liberal MPs facing uphill battles against pro-climate independent candidates in inner-city seats, and Australia’s international allies.

Britain, the US and most other wealthy nations have committed to cut emissions by about 50 per cent or more by 2030 and to reach net zero by 2050 at the latest.

Australia has not set a deadline to reach net zero, but is bound by its commitment under the Paris Agreement to reduce emissions by at least 26 per cent by 2030.

Mr Joyce says he is open to a net zero commitment, as long as regional Australia is shielded from economic impacts. When asked his price, Mr Joyce said earlier this month: “In any deal, I don’t start by saying what I think it’s worth. I start by saying how much do you want it?”

The renewable energy zone slated in Mr Joyce’s New England electorate is forecast to attract $10 billion in private investment, with much of the cash to flow to farmers hosting renewables projects on their land.

“John Barilaro has been able to convince his party room and convince his community of the benefits [of climate action],” Mr Kean said.

“When you electrify an economy you transfer wealth from a handful of big resources and energy companies to farmers and landholders across the state.”