Let's run through some emotions, because this is Victoria today: angry, frustrated, confused, disappointed and suspicious. That's just a start. We feel dudded.

For weeks we clung to the hope that if we did the right thing, if we kept the doors to business closed and stayed locked in our houses, then today the pain would begin to ease and the reopening would begin. 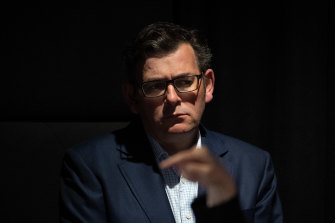 Daniel Andrews says he is hitting “pause” on the announcement of reopening.Credit:Eddie Jim

We worked hard at beating this virus down to figures that once looked unachievable. But we did it. The 14-day average for new cases is 4.6. The target was five. We did it and we were proud of ourselves.

Now we are crushed. Because despite meeting the targets, our Premier has decided to delay any further reopening in the metropolitan area, and make restricted changes in regional Victoria.

Why? He doesn't get it. He says he is hitting "pause" and there may be better news within a few days, or a week.

The national employer organisation Ai Group said this was a "hammer blow" to business. The Business Council of Australia said it was "devastating". And the Chamber of Commerce said business was in "limbo". It is claimed 1000 jobs a day are vanishing.

The business leaders were all correct. So too were the small business operators, the owners of cafes and pubs and shops, some of whom simply cried at the news.

And why? The targets were met. People did the right thing despite the pain. And having been promised likely relief, they got none. The government says there is a dangerous new outbreak emerging in the north of the city and that needs to be crushed. So 6 million people are locked away because of a handful.

The real reason behind this is another failure of this government. The decision to delay reopening is an admission the crucial contact tracing system is not good enough.

This shows the government has no trust or confidence in its own system despite continually saying it is "gold standard". If it really was, the outbreak would not have got to this stage. If it was properly structured and organised, this would have been controlled earlier.

The part of Melbourne affected is heavily migrant. There are language problems. But only on Saturday, four days after this began to emerge, did the Premier organise a meeting with community leaders to make sure the message was getting through to their people.

Still, for no obvious reason, local GPs are not part of the tracing and support system.

Some of these migrant groups deeply distrust authority. They will listen to their GP. Why not bring them onto the team? It is absurd and dangerous not to recognise and exploit such a resource.

What this government is doing is imposing more pain on us because of its own failings. But should anybody be surprised? This is the government that so bungled hotel quarantine that hundreds died. And now nobody in charge can remember exactly what happened.

That devastating failure has probably made it wary and perhaps overcautious. But regardless, if contact tracing was adequate and working, it might have more confidence in trusting the public to live with caution and businesses to open with care.

But there is more to it, and it is subtle. What Daniel Andrews showed on Sunday is that he simply doesn't get it.

Any epidemiologist will tell you their "science" is a mixture of mathematics, medicine and psychology. Managing a pandemic is largely about managing the public. That means explaining decisions properly, which Andrews will not do.

He warned that if he didn't extend the lockdown, cases would possibly explode. He didn't provide data or modelling to support it. And managing the public means managing expectations, encouraging civil obedience rather than threatening disobedience, and trusting the people with information and a sense of responsibility.

Andrews doesn't trust Victorians. He treats us like children. He doesn't lead Victorians, he threatens us. If he did need to extend this lockdown, even if it was because of his own government's ineptitude, he should have explained why in detail and provided some genuine hope we are headed the right way.

He clearly does not understand the psychology of his people, who are close to snapping point.

Business after business contacted me on Sunday afternoon saying they will now ignore all restrictions.
These are not idiots or irresponsible tin hat-wearing conspiracy theorists. These are good, honest, hard-working people who have had enough of the trickery and the incompetence.

Until we get a vaccine there will always be outbreaks. But society cannot remain locked down.
We need to strike a balance between risk and the human devastation lockdown brings. We must fix the tracing and it must react quickly, without spin or lies, when it needs to react.

Everybody is losing patience with the way Victoria is bumbling through this. The federal government made that clear in a strong statement on Sunday afternoon.

Business has long lost patience with the government, some of the unions are similar, and even the churches are rebelling.

Most important, I believe, the public has had enough of the arrogance and trickery.

Sunday's events have opened a door to a dangerous area. Regardless of how long this pandemic chews at our lives, Andrews will now struggle to regain the trust of his people. They just won't believe him.

Get our Coronavirus Update newsletter for the day’s crucial developments and the numbers you need to know. Sign up to The Sydney Morning Herald’s newsletter here and The Age’s here.