Kyle Jamieson claimed a maiden five-wicket haul as New Zealand bowled out India for 242 and reached 63-0 on the first day of the second Test.

SCORECARD | AS IT HAPPENED

Playing in only his second Test, Jamieson took 5-45 as New Zealand made good use of the toss and a green pitch to dismiss India in 63 overs.

The tall fast bowler followed up a strong debut in Wellington in which he took 4-39 and scored 44 as New Zealand won by 10 wickets to lead the two-match series.

The Hagley Park pitch was less the seam bowler’s paradise it had seemed when the covers were drawn back Saturday after overnight rain and the players stared in surprise at a bright green surface. But it was still helpful and the New Zealand bowlers stuck mostly to well-laid plans to again neutralize India’s powerful batting line-up.

Three batsmen got away from them to make half-centuries. Hugely-talented opener Prithvi Shaw lived up to his reputation with an aggressive 54 in the opening session, defying the new ball and the threat of the New Zealand seamers.

Cheteshwar Pujara and Hanuma Vihari made half-centuries in an 81-run fifth-wicket partnership during the second session which rallied India after the loss of captain Virat Kohli for three.

Vihari was out just before tea and Pujara straight afterwards as India folded and lost their last six wickets for 48 runs. Neil Wagner set that collapse in motion with the wicket of Vihari just as India appeared to be coming back strongly into the match. But it was Jamieson who ran through the lower order.

He had bad luck early in the day when Vihari was dropped from his bowling by wicketkeeper B.J. Watling when he was on nine. Watling made an error in diving in front of first slip to attempt a catch which would have been easily taken by the fielder.

Jamieson was rewarded for application when he dismissed Pujara after his patient innings of 54 from 140 balls, his 25th half century but his first in New Zealand. He then skilfully mixed his length to dismiss Rishabh Pant (12), Ravindra Jadeja (12) and Umesh Yadav (0). 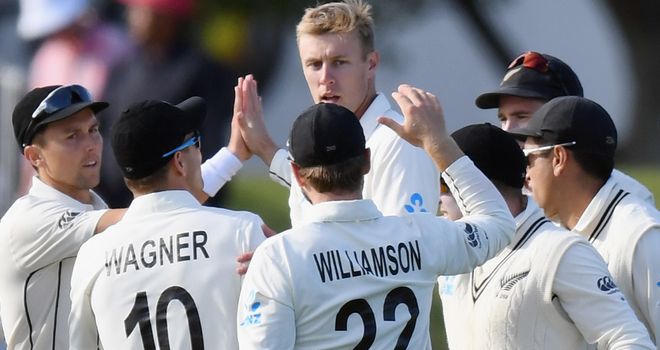 Mohammed Shami (16) and Jasprit Bumrah (10) showed some resistance, adding 24 for the last wicket before Trent Boult ended the innings.

Jamieson had made first impact early in the day when he dismissed Shaw. Moments earlier he had watched from fine leg as Shaw sent a ball flying over his head and into the crowd to bring up his second half-century from only four Test appearances.

Shaw made 16 and 14 in the first Test, which was also played on a green pitch and in which India was compelled to bat after losing the toss. He modified his technique on Saturday and looked more accomplished, hitting eight fours and the six which raised his 50 from 61 balls.

Shaw hit especially well between point and mid-off, punishing any bowler who missed his length.

At lunch India were 85-2. The loss of Kohli shortly after the lunch break was a body blow but Pujara eked out a patient half-century from 117 balls to strengthen the India innings.

When he was with Vihari the pair were able to put pressure back on the New Zealand bowlers who sometimes lost their lengths. But Vihari’s dismissal in sight of tea was perhaps the turning point of the day.

The performance of New Zealand’s openers in surviving 23 overs before stumps was also crucial in tightening New Zealand’s grip on the game. Tom Latham was 27 not out and Tom Blundell 29 not out when stumps were drawn.

Watch day two of the second Test between New Zealand and India from 10.25pm on Sky Sports Cricket.