Contemporary art’s great wave has taken its time to engulf the Pacific. The voyages of Captain Cook and other explorers may have opened up the region to European influence and the depredations of colonialism but the post-colonial era has seen a resurgence of indigenous expressions.

Traditional forms and new means have combined to produce a hybrid approach to Pacific culture as a cosmopolitan generation of artists seeks to reclaim the past and reach out to the wider world.

Such are the conclusions to be drawn from Wansolwara: One Salt Water, an ambitious project shared between the UNSW Galleries and Gallery 4A and launched in January with a host of performances, talks and workshops, including a writers program.

The 4A component has been selected by gallery director Mikala Tan, but most of the exhibition is the work of Samoan-born artist and curator Leuli Eshraghi, an on-line portrait of whom tells how he “processes intergenerational trauma, honours diasporic indigeneity, and imagines multilingual, sovereign bodies and relationships to our planet.” 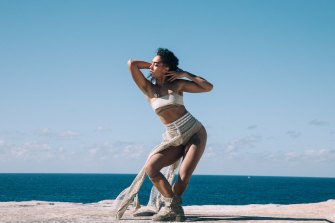 Amrita Hepi in A Body of Work (At the end of the Earth).

That all sounds like good stuff, although the terminology is not exactly alluring. Wansolwara explores the diverse cultures of the Pacific united by their shared relationship with the world’s largest ocean. The emphasis is on those things Pacific peoples hold in common and dialogues that are taking place.

The major part of the exhibition is ‘O le ūa na fua mai Manu’a, a large display of video work at the UNSW galleries. The show features artists from as far afield as Chile, Canada and the Northern Territory, although the latter could hardly be seen as part of the Pacific. In a manner that’s  increasingly common, most of these pieces are rather static with little narrative thrust. It’s puzzling why so many artists are satisfied with such simplistic options. It’s as if the very act of portraying themselves – or one basic scenario – is the limit of their ambitions.

When aesthetic transformation is ignored in favour of mere presentation it means the entire burden of meaning is shifted onto individual identity. In other words, we are expected to find something profound in the assertion of gender, ethnicity, etc.

Shannon Te Ao’s My life as a tunnel shows two Maori men embracing. It’s a simple, compassionate gesture, but that’s all the artist gives us. Amrita Hepi’s A Body of Work (At the End of the Earth) is literally a body – the body of a dancer in motion standing on a rocky outcrop. 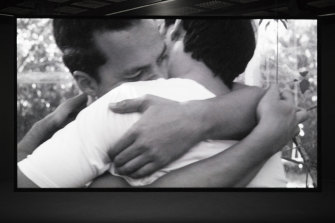 Shannon Te Ao’s My Life as a Tunnel.Credit:Zan Wimberley

Angela Tiatia is an artist whose star has been rising over the past couple of years, but her work relies heavily on statements of identity. This exhibition features Tiatia’s video, Dark Light (2017) in which the artist’s naked body reposes at the bottom of the frame, illuminated by an elaborate chandelier that dangles incongruously amid lush tropical vegetation. The most striking detail is the traditional Samoan tattoo wrapped around Tiatia’s thighs. We are invited to read the artist’s body as symbolic of both the natural world and traditional culture while the chandelier represents the frozen, artificial aspect of imported European ways of thinking.

Such works blur the lines between eros and politics in a way that hasn’t been seen since the '60s.

This isn’t the case with pieces such as Gutingarra Yunipingu’s 10-channel video which deals explicitly with language and communication. In 10 full-length self-portraits, the artist demonstrates the fundamentals of Yolngu sign language. In Yunipingu’s community, these signs are not only used by the deaf but by hunters who want to pass on messages without disturbing the game. We are asked to accept an expanded concept of language, spelled out silently by the artist’s entire body.

Another exception is Rock Piece, by Inuk artist Asinnajaq, which features the artist emerging from a pile of rocks, as if being born from the earth. It’s like watching the enactment of a creation myth but the casual nature of the resurrection makes it mildly humorous, like a game of peekaboo. 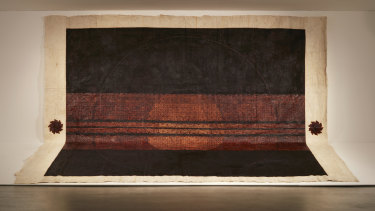 There are two further components of Wasolwara in the upstairs galleries at UNSW. OFO HAKE: Koe Ngatu Teuteu ‘o ‘Akesa mo ‘Isileli Fifita consists of two impressive fibre works made in Tonga and New Caledonia by Ruha Fifita and a host of collaborators. These are referred to as ngatu – a painted bark cloth. Making such cloths is a labour-intensive process that engages families and friends, conferring a special emotional value on these artefacts.

The final component is Shivanjani Lal’s Beta, ek story bathao, which means “Child, tell me a story”. Lal, who is described as “a twice-removed Fijian-Indian-Australian artist” was the winner of the 2019 NSW Visual Arts Emerging Fellowship. Her work, which includes video, photography and works on paper, explores a family history that took her forebears from India to Fiji, and finally to Australia. It’s another exercise in mapping identity – making a personal story into something public and universal. In the manner of the video works downstairs there’s probably more life than art in this installation. 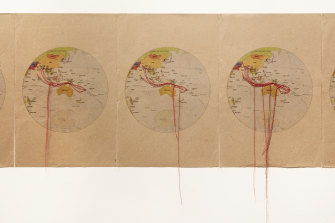 Wansolwara may have had its greatest success as a meeting place – a festival, perhaps – rather than an exhibition. Without the personal interactions and exchanges we are left with the remnants, best symbolised by Paula Schaafhausen’s installation at Gallery 4A, Ebbing Tagaloa, in which a set of figures of the Polynesian ocean god, cast from coconut oil and sand, have melted back into a flat tray. It may be a deliberate act, as a comment on global warming, but viewers who walk into the gallery today will feel they’ve turned up late for the party.

There’s obviously a lot stirring in the Pacific but much of the work in Wansolwara feels like a preliminary stage of something greater. When artists are preoccupied with finding out who they are, this can be an important, personal rite of passage but it makes for an indifferent viewing experience. The optimistic view of this multifaceted project is that the best is yet to come.