Neutron star and a pulsar are stuck in a ‘fiercely tight’ orbit and will merge in an enormous collision in 470million years, astronomers say

Astronomers have observed two collapsed stars spinning rapidly around each other in a doomed dance.

A neutron star, the ultra-dense remains of a once vast star, is believed to be in a ‘fiercely tight’ orbit around a pulsar.

A pulsar is a magnetised neutron star that spins rapidly, flinging out bursts of radio waves like a galactic lighthouse.

It is highly unusual to observe two neutron stars orbiting each other in a binary system in this way, scientists say, and astronomers predict the two giants will collide and merge in 470 million years. 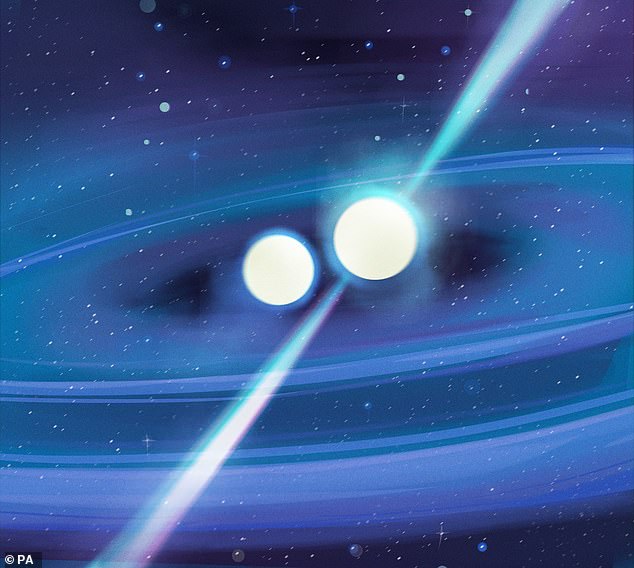 Astronomers have observed two collapsed stars spinning rapidly around each other in a doomed dance. Pictured, artist’s impression

The merger of the two incredibly massive objects will release massive amounts of energy in the form of gravitational waves and light.

The first-ever glimpse of two neutron stars colliding was observed in 2017, opening the door to a new era of astronomy.

But the enormous amount of matter ejected from this merger and its brightness remained an ‘unexpected mystery’.

Lead researcher Dr Robert Ferdman, from University of East Anglia’s School of Physics, said: ‘Most theories about this event assumed that neutron stars locked in binary systems are very similar in mass.

‘Our new discovery changes these assumptions. We have uncovered a binary system containing two neutron stars with very different masses.

‘These stars will collide and merge in around 470 million years, which seems like a long time, but it is only a small fraction of the age of the universe.’

These stars are made of matter much more densely packed than normal and which give the entire star a density comparable to an atomic nucleus.

The diameter of our sun would shrink to less than 18 miles if it was that dense.

These give off radiation in a cone shaped beam which sweep across the sky like the light from a lighthouse as the star rotates.

When the beam sweeps over earth, it becomes visible as a pulsar, producing light that cycles every few seconds to just a few milliseconds.

Their rotational period is so stable that some astronomers use it to calibrate instruments and have proposed using it to synchronise clocks.

British astronomer Dame Jocelyn Bell Burnell was the first person to discover a pulsar in 1967 when she spotted a radio pulsar.

Since then other types of pulsars that emit x-rays and gamma rays have also been spotted. 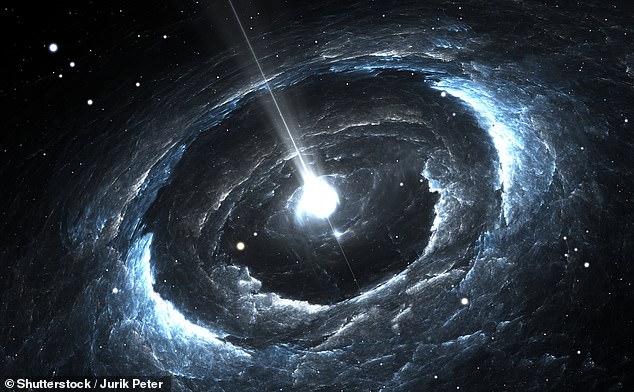 A neutron star, the ultra-dense remains of a once vast star, is believed to be in a ‘fiercely tight’ orbit around a pulsar

Dr Ferdman said that as one of the stars is ‘significantly larger’ than the other, its gravitational influence distort the shape of its companion, ‘stripping away large amounts of matter just before they actually merge, and potentially disrupting it altogether’.

This, he added, will result in a far more powerful explosion than a collision of neutron stars with equal masses.

According to Dr Ferdman, their findings, published in the journal Nature, also highlights ‘there are many more of these systems out there – making up more than one in 10 merging double neutron star binaries’.

The researchers say neutron star mergers could help unlock some of the biggest mysteries in astrophysics, including a more accurate determination of the expansion rate of the universe, known as the Hubble constant.

Study co-author Dr Paulo Freire, from the Max Planck Institute for Radio Astronomy in Bonn, Germany, added: ‘Such a disruption would allow astrophysicists to gain important new clues about the exotic matter that makes up the interiors of these extreme, dense objects.

‘This matter is still a major mystery – it’s so dense that scientists still don’t know what it is actually made of.

‘These densities are far beyond what we can reproduce in Earth-based laboratories.’

WHAT ARE NEUTRON STARS?

Neutron stars are the collapsed, burnt-out cores of dead stars.

When large stars reach the end of their lives, their core will collapse, blowing off the outer layers of the star.

This leaves an extremely dense object known as a neutron star, which squashes more mass than is contained in the sun into the size of a city.

A neutron star typically would have a mass that’s perhaps half-a-million times the mass of the Earth, but they’re only about 20 kilometres (12 miles) across.

A handful of material from this star would weigh as much as Mount Everest.

They are very hot, perhaps a million degrees, highly radioactive, and have incredibly intense magnetic fields.

This makes them arguably the most hostile environments in the Universe today, according to Professor Patrick Sutton, head of Cardiff University’s gravitational physics department.

The dense objects, in particular their cores, are key to our understanding of the universe’s heavy elements.