Models, royals and aristos put on their party finery to celebrate landowner Tom Naylor-Leyland’s 40th birthday over the weekend.

Mr Naylor-Leyland is the eldest son of Baronet Sir Philip Naylor-Leyland and heir to the family’s £176million fortune and vast estates, including the 17th century Nantclwyd Hall in Denbighshire, Wales, where the celebrations were held.

The event was hosted by his glamorous wife, Alice Naylor-Leyland, who is a contributor at US Vogue and runs her own tableware company, Mrs Alice, which specialises in providing hostesses with everything needed for an Insta-worthy dinner table.

Her flair for tablescaping was on full display at her husband’s birthday party, with no fewer than three separate ‘themes’ on show, complete with matching crockery, table linen and colour co-ordinated flowers. 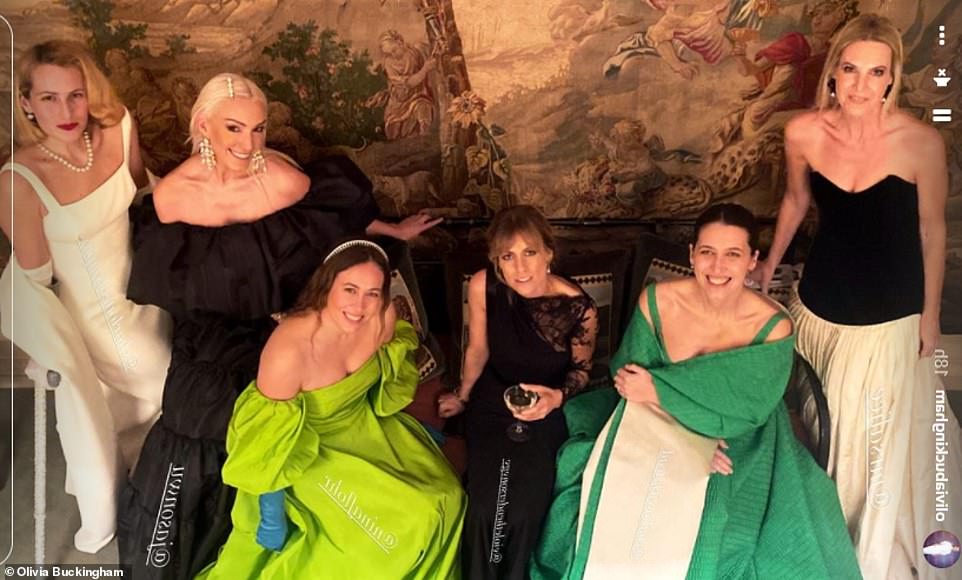 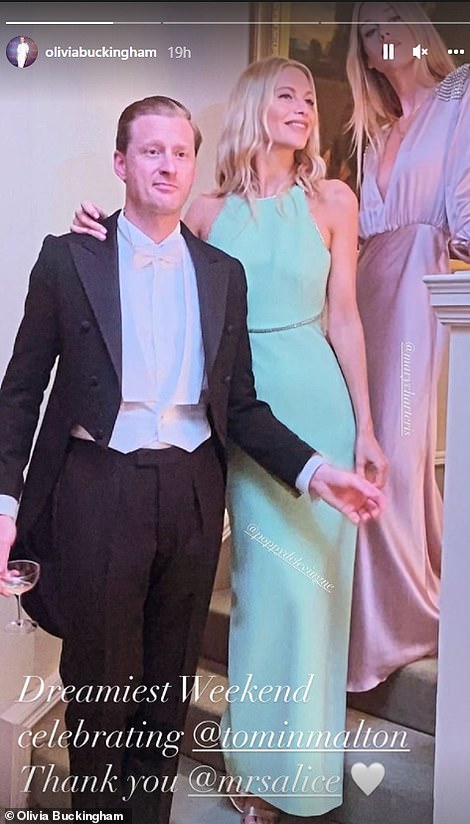 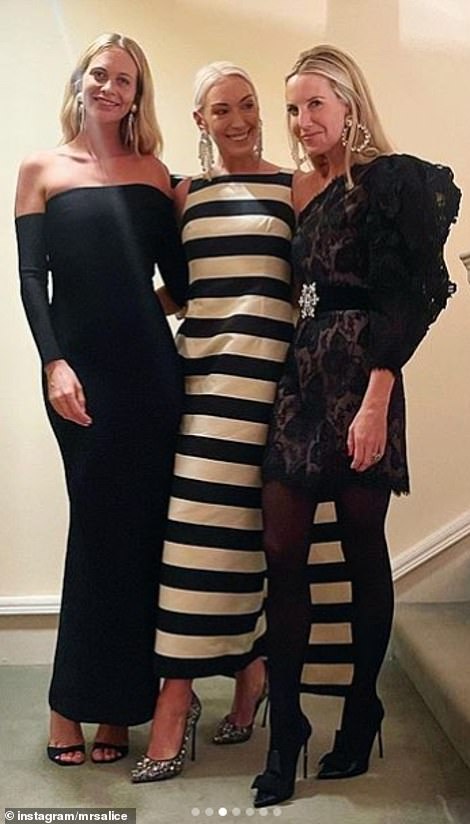 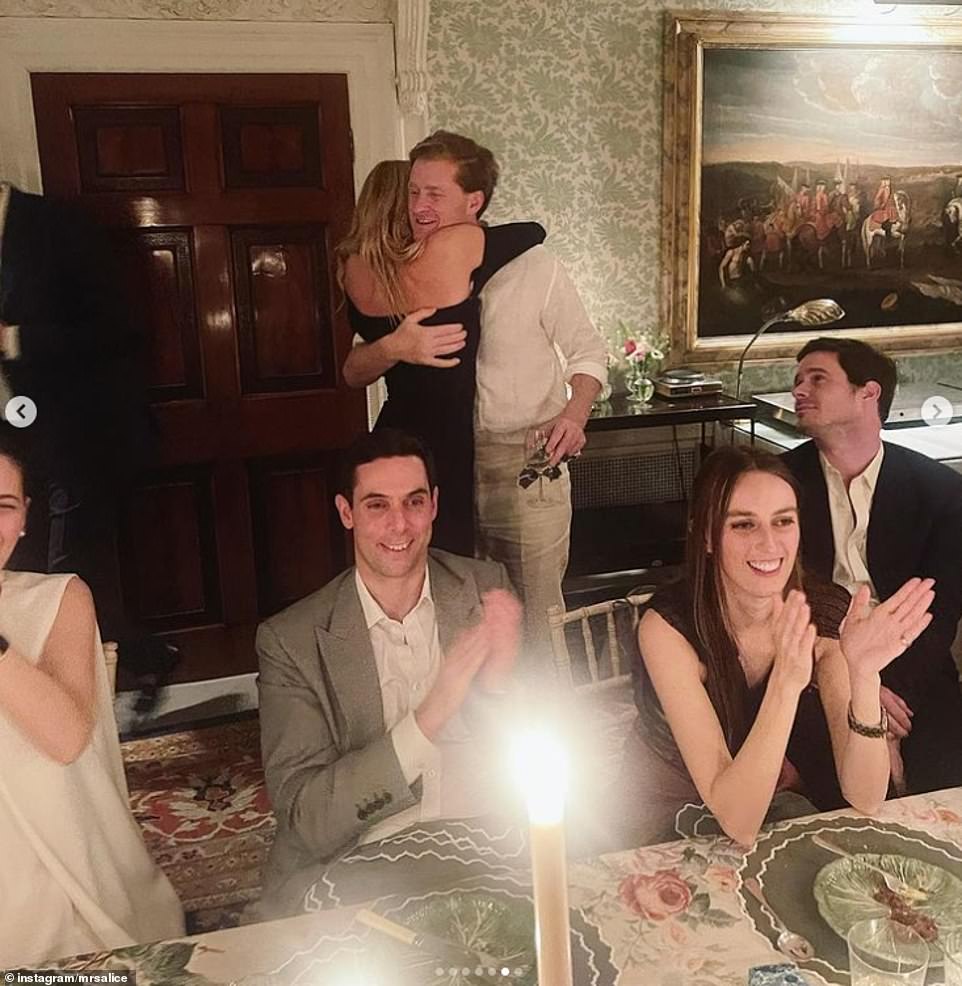 Posh pals: Emilia Wickstead (left) and Lady Alice Manners, daughter of the Duke of Rutland, clapped as the birthday boy walked in. The celebration was held at the 17th century Nantclwyd Hall in Denbighshire, Wales

They were treated to a black tie dinner, with the women donning ballgowns and opera gloves, and a second, more informal gathering.

Fashion designer Emilia Wickstead, 38, looked predictably glamorous in a dramatic green and white creation with a dramatic cape for the black tie do, while Nina Flohr, 35, the heiress wife of Prince Philippos of Greece, opted for a daring lime green dress with clashing azure blue gloves.

Also in attendance was Violet Henderson, whose husband, William, is a polo pal of the Duke of Cambridge and became Lord Vestey on the death of his ‘beef Baron’ father, a member of the Queen’s inner circle, in February last year. 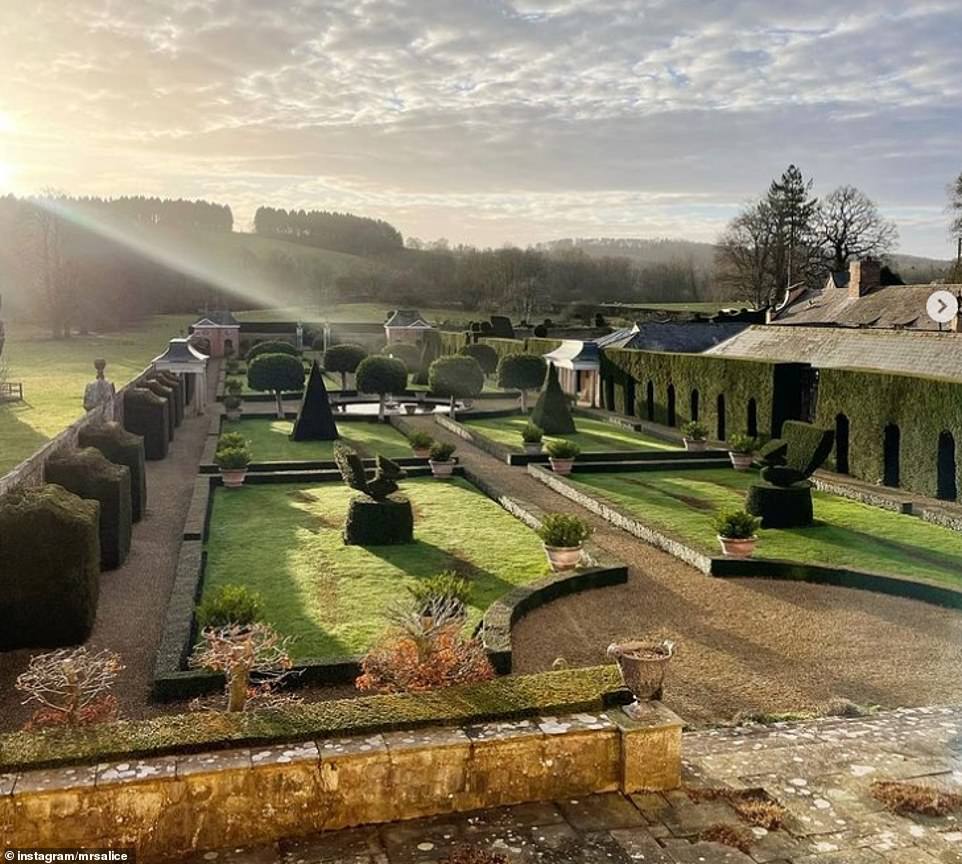 Exclusive venue: Originally built in 1622, Nantclwyd Hall was owned by the Thelwell family before being purchased by the Naylor-Leylands in the mid-19th century, who extended the property. Above, Alice’s photo of the property 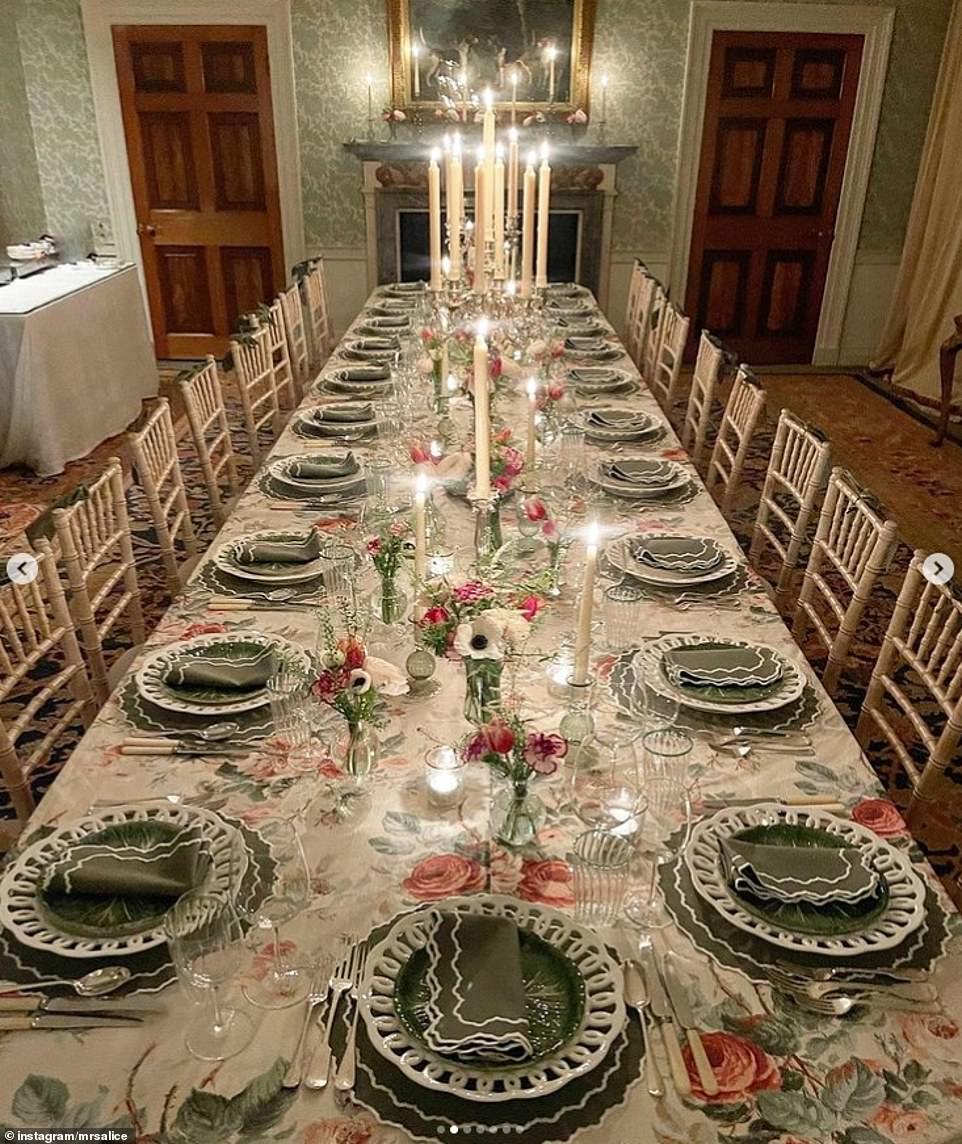 Intimate: Alice’s flair for tablescaping was on full display at her husband’s birthday party, with no fewer than three separate ‘themes’ on show, complete with matching crockery, table linen and colour co-ordinated flowers, as seen above 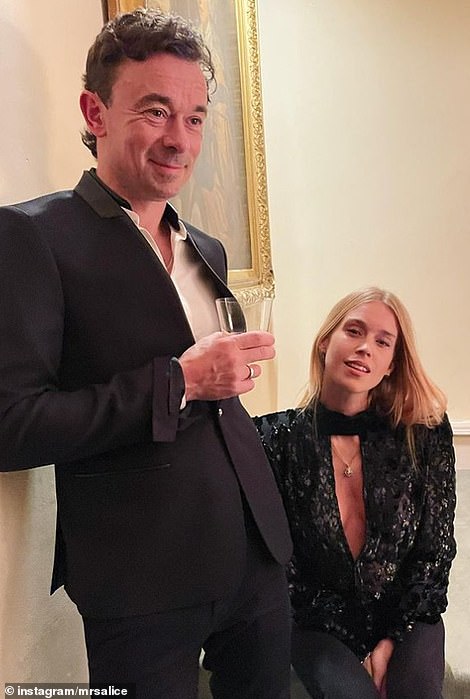 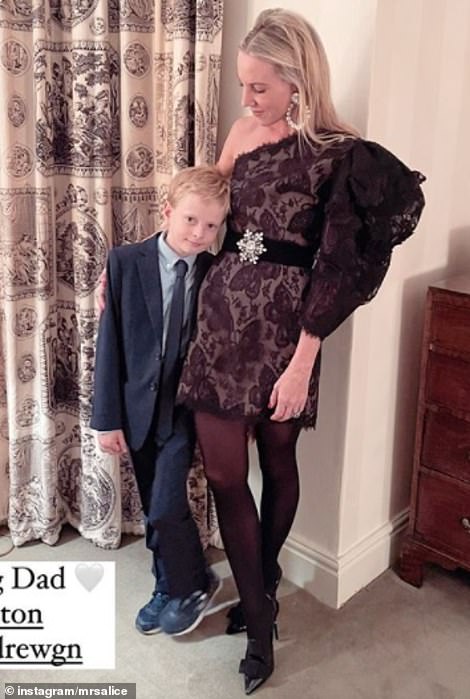 Rock chic chic: Lady Mary Charteris with her husband. Right, Alice Naylor-Leyland with her son Billy, ahead of the party 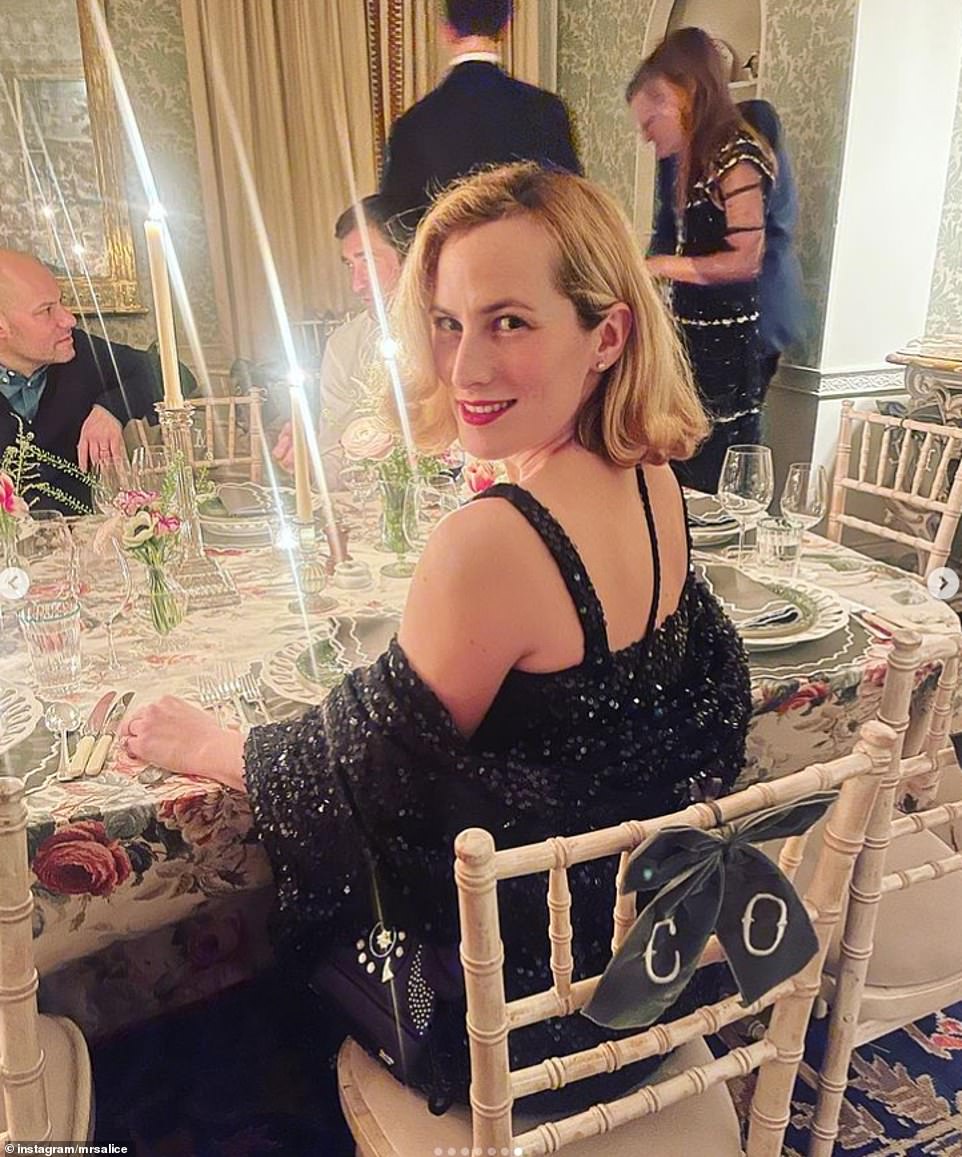 Little touches: Shoe designer Charlotte Olympia at the dinner table. Chairs were adorned with initialed bows for each guest 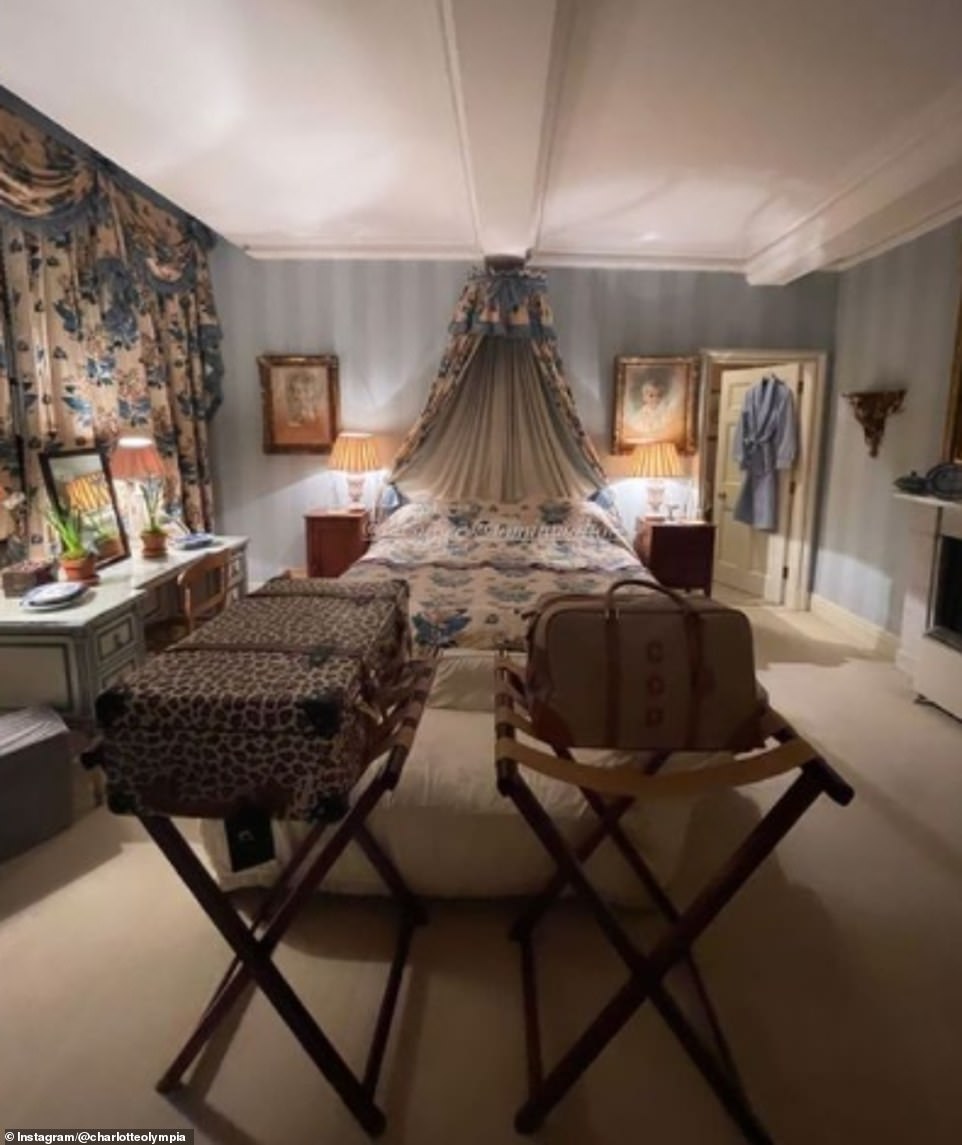 Staying in luxury: Charlotte Olympia shared this snap of her exquisite blue-themed bedroom for the weekend

Lady Alice, daughter of the Duke of Rutland and resident of The Crown’s Belvoir Castle, shared snaps from the weekend on her Instagram account, including one of the dining table decorated with squashes and mushrooms for an autumnal theme.

The Naylor-Leylands live with their three children at Stibbington House, in Cambridgeshire, where they delight in hosting society friends.

They also have a flat in Chelsea, London, and a family home in Malton, North Yorkshire, where his family own the 17th-century Talbot Hotel. He is credited with helping to transform Malton into a foodie hotspot.

Tom helps promote Malton as Yorkshire’s Food Capital via the Food Festivals, Monthly Food Markets and the Made In Malton project. ​Tom is a self-confessed foodie having trained at Dukes Hotel and worked for influential chef Sally Clarke.

Alice is a long-time friend of Princess Beatrice who has been a Vogue columnist, a model and a fashion muse.

The mother-of-three, who was named as one of Tatler’s ‘society swans’ of 2018, regularly shares snaps of her glamourous life on Instagram. 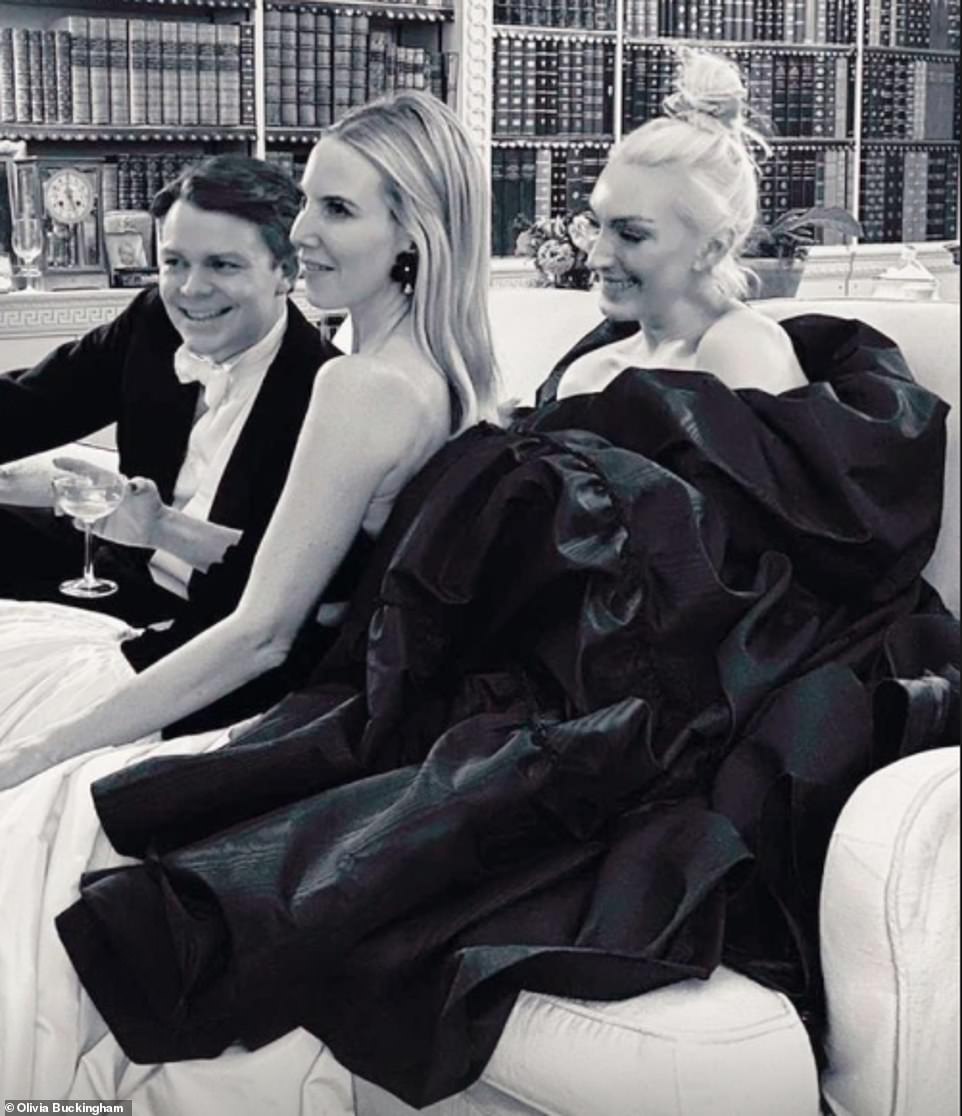 All out glamour: Hostess Alice Naylor-Leyland (centre) with guests including Olivia Buckingham (right) at the black tie do 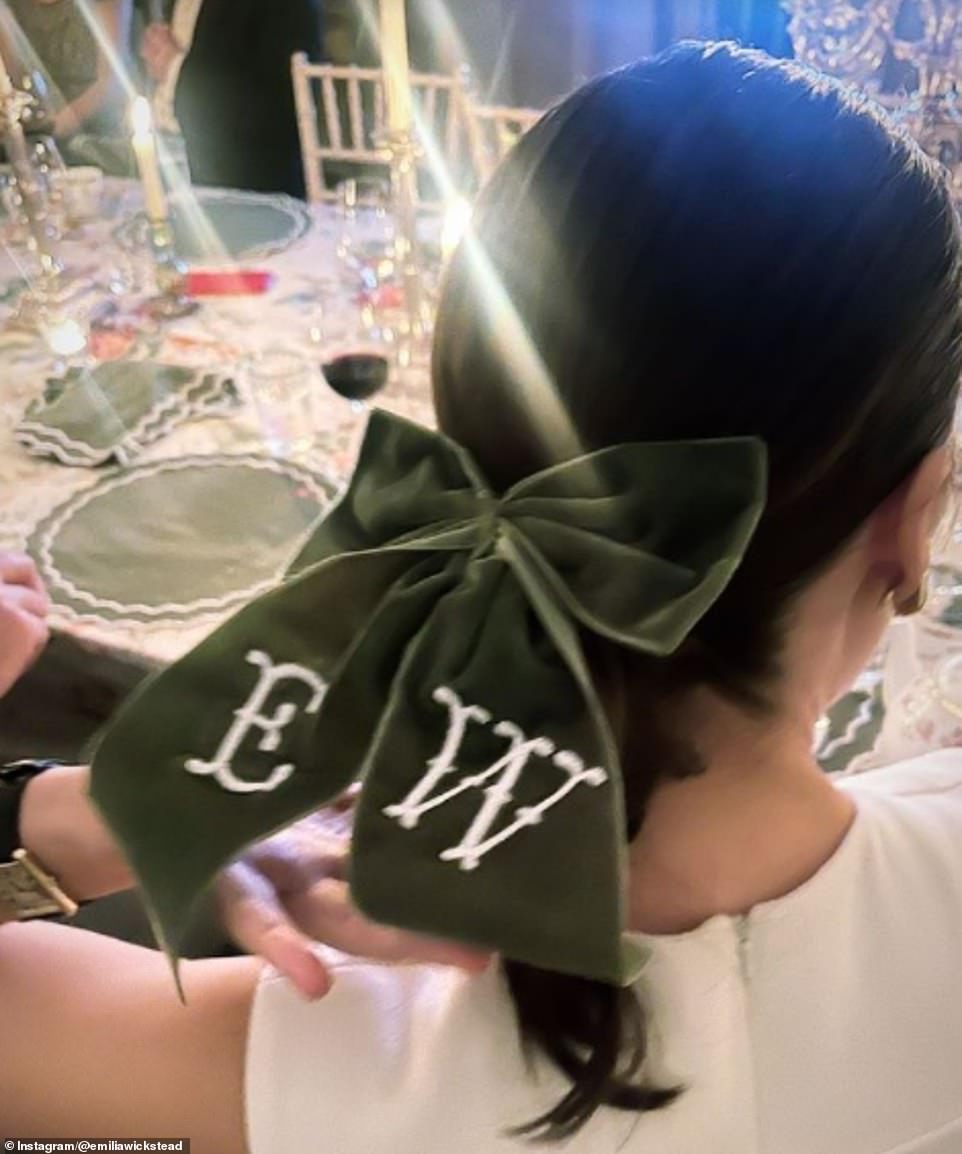 Bow down! Emilia Wickstead showed off the green velvet bow embroidered with her initials at the dinner table

And the socialite’s closet would make any fashionista green with envy, from Erdem to Gucci and couture accessories.

Alice’s step-sister is the model Bea Fresson, who recently starred in a Dolce & Gabbana ad campaign alongside Lady Kitty Spencer.

Originally built in 1622, Nantclwyd Hall was owned by the Thelwell family before being purchased by the Naylor-Leylands in the mid-19th century, who extended the property.

It was decorated by interior designer John Fowler, known for work at Buckingham Palace. Alice paid tribute to the designer, who was known for his love of florals, with her choice of rose tablescape.