Home » Lifestyle » Mike Tyson and Roy Jones Jr. are annoyed their boxing exhibition will have 2-minute rounds, as they think they’re ‘for women’ 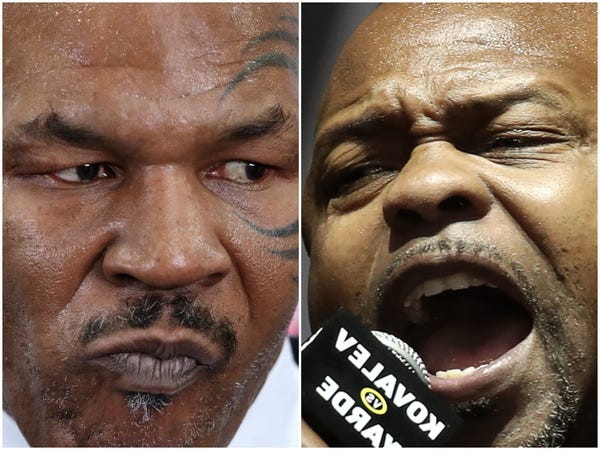 Mike Tyson and Roy Jones Jr. are annoyed at the rules of their boxing exhibition as two-minute rounds are "for women."

The two all-time great boxers spoke at a virtual press conference Thursday attended by Insider ahead of their behind-closed-doors showdown at the iconic Staples Center in Los Angeles on November 28. The exhibition is not an official bout.

The former heavyweight champions have even been told to take it easy on one another by boxing officials. And though they will fight without headgear, they will only compete in eight two-minute rounds as a safety precaution.

These rule stipulations have vexed both competitors. Tyson was asked during the online media event whether he was disappointed to be fighting two-minute rounds rather than three, and he immediately said, "Absolutely."

"I'm sure they have their reasons for doing it. The women fight for two minutes," Tyson said, adding: "But it's not about me, there's a charity [element] … I'm just happy we're doing it."

By contrast, in women's boxing, rounds are reduced to two-minute rounds, even in world title fights.

"Like he said, that's for women. I kept fighting until the last minute, saying, 'Why we fighting two-minute rounds?' I don't understand that. We're not women. We're two of the best to ever do it.

"So, for us, what difference does it make? Two minutes doesn't do anything for him or for me. To be honest with you, it cheats the fans out of it.

"It would give us a little more time to set up a better shot than we could have in two minutes. It was advantageous for everybody to keep it to three minutes.