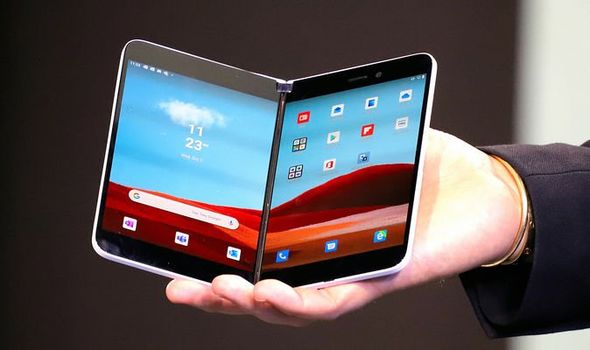 Microsoft will launch its first foldable gadgets at the end of the year. Dubbed Surface Neo and Surface Duo, the two devices will have dual touchscreens connected by a hinge. While the former will run a new version of Windows 10, Surface Duo will be powered by Android.

Like other recent Android foldables, Microsoft has to try to solve the problem of what to do when the screens are clamped shut.

While the Samsung Galaxy Fold and Motorola Razr have fitted an extra screen to the outside of the device to allow smartphone owners to skim-read notifications, answer calls, dismiss emails and messages …Microsoft is planning something very different.

According to a recent leak from almost-infallible tipster @h0x0d on Twitter, Microsoft wants users to pry open the folding Surface Duo to “peep” at the notifications.

When the gadget detects that you’ve opened the hinge a crack – it will bunch all of the key information from the notification onto the right hand-side of the display. The time is also clustered away too. Surface Duo owners will be able to accept or decline calls using this “peek” feature too. So, if you feel the Duo buzz, or hear it ring, you’ll be able to prise open the hinged handset to check who is calling – before deciding whether or not to answer the call or not.

Check out the new peek-to-preview feature in action below…

Just as you’re able to do with the notification shade on any Android smartphone or tablet, Surface Duo owners will be able to swipe away notifications they’d like to dismiss, tap to expand on those of interest, and more.

Microsoft hasn’t confirmed the existence of the peek-to-preview feature detailed in the video from @h0x0d, but the Redmond-based company has already released a preview toolkit for developers to prepare Android apps for the unique form-factor of the Surface Duo.

The Windows 10 company clearly wants developers to dream-up innovative experiences for the dual-screen devices. Samsung is working closely with Google to ensure Android apps adapt to the pliable touchscreen technology found on its Galaxy Fold and Galaxy Z Flip handsets.

The latter has a minuscule display on the front of the handset that shows Caller ID as well as new notifications when they drop in. However, users aren’t able to interact with them in the same way that Galaxy Fold or Surface Duo owners are able to without opening the handset.

Microsoft isn’t due to launch its new dual-screen Surface devices until the end of the year, so there’s plenty of time left for the company to make changes to the underlying code and the way Android apps work on the device.