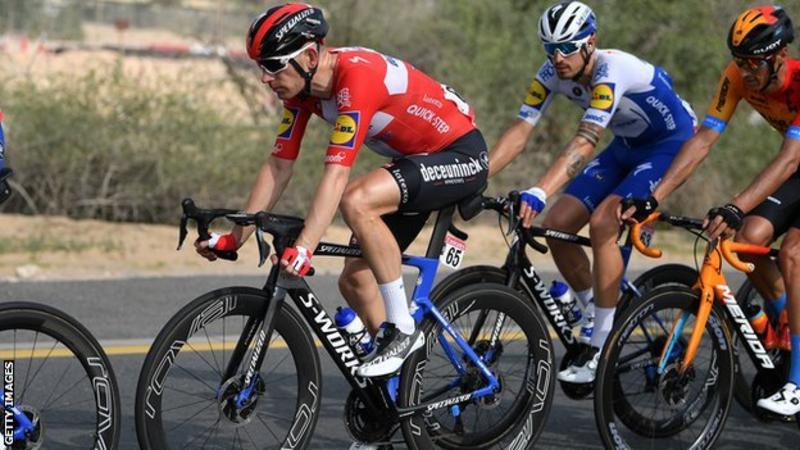 Michael Morkov says he felt “really guilty” he might have had coronavirus and then passed it on after travelling to the Track Cycling World Championships from the UAE Tour.

The Dane, 34, has been cleared to compete in Berlin by the UCI after 34 hours in isolation.

He took part in the first four days of the Tour before it was cancelled due to two suspected cases of coronavirus.

“It’s a big relief,” said Morkov, who was not tested for the virus.

“It is not a nice feeling even though I know I couldn’t have done anything about it.

“I was feeling really guilty that I might have brought this virus to other people and team-mates.”

Morkov was at the Berlin Velodrome on Thursday night to watch Denmark break the team pursuit world record on their way to gold.

Cycling’s governing body, the UCI, confirmed on Saturday he can compete.

“The rider present in Berlin is currently in excellent health, with no suspicious clinical signs, and we are also guaranteed that he has not contacted the two members of the management of a team participating in the UAE Tour, originally suspected of coronavirus,” the UCI said.

Also on Saturday, the organisers of the UAE Tour said that all 167 people at the event who were put into quarantine, including British riders Chris Froome and Adam Yates, had returned negative tests for coronavirus.

“Obviously when I went to the velodrome and was watching the guys break the world record in the team pursuit, there were no coronavirus rumours,” he said.

“Then I’m coming back to the hotel and we hear this rumour. I realised that I could be a potential carrier of the virus and obviously I was thinking about us hugging a hundred times over there.”

Morkov said he and his coach decided on Friday morning he should stay in isolation because he “wouldn’t feel well if he jeopardised anybody with the risk”.

He spent the day training on rollers in his hotel room, talking with family on the phone, but said the UCI handled the situation “really well”, adding it would have been easy for them to have “turned a blind eye” to him.

Morkov will compete in Sunday’s madison – a world title he won in 2009 – with team-mate Lasse Norman Hansen.

He added: “I feel really good for tomorrow, I don’t believe it will affect my race. Only in a positive way maybe because I’m more motivated for a good race than I was before I came here because now I feel really privileged that I get to race.”