Meghan Markle’s farewell wardrobe was a ‘masterclass in revenge dressing’ designed to show the monarchy what it’ll be missing, claims Vanity Fair – and draws comparison to THAT Princess Diana dress

The Duchess of Sussex’s outfits for her final royal engagements were a ‘masterclass in revenge dressing’, according to Vanity Fair.

Meghan Markle, 38, dazzled in a string of vibrant ensembles as she carried out her final outings as a member of the royal family, including an azure blue Victoria Beckham dress for the Endeavour Fund Awards last Thursday night and a sweeping scarlet Safiyaa gown for the Mountbatten Festival of Music over the weekend.

The looks culminated in a bespoke emerald green dress with caped detailing by Emilia Wickstead as she stepped out in public for the final time on Monday at the Commonwealth Day service at Westminster Abbey. 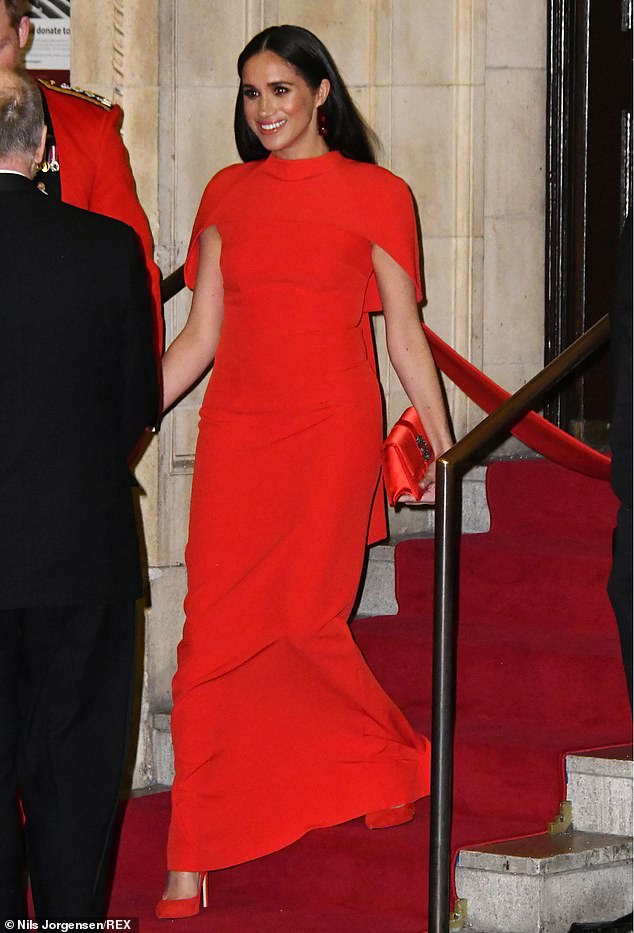 Meghan Markle, 38, dazzled in a string of vibrant ensembles as she carried out her final outings as a member of the royal family, including this scarlet gown by Safiyaa, which she wore to the Mountbatten Festival of Music at the Royal Albert Hall over the weekend 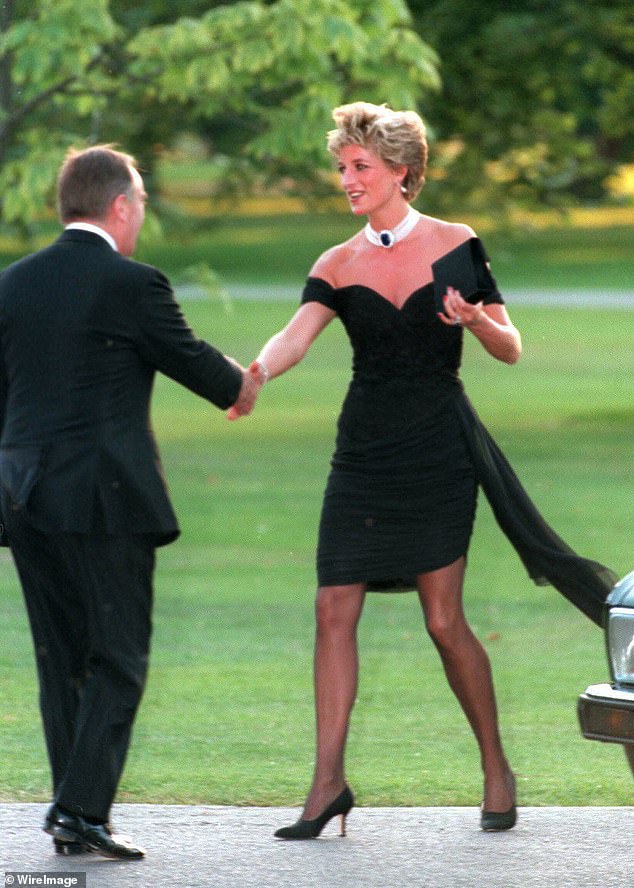 The Duchess’s farewell wardrobe, is comparable to Princess Diana’s ‘revenge dress’, pictured, according to Vanity Fair. Princess Diana made headlines when she wore this dress by Christina Stambolian on the same night Prince Charles gave his infamous interview about Camilla

Vanity Fair told how these carefully constructed outfits were designed to show the Royal Family ‘what they’ll be missing’ once Meghan and Harry, 35, give up their royal titles and step back from their duties at the end of the month.

The article reads: ‘Over the past few days, Meghan’s spate of bright, body-hugging, almost-achingly glamorous looks during her and Harry’s proverbial “farewell tour” are a master class in revenge dressing—except instead of an ex-boyfriend, the entity that should be sad to lose her is the British monarchy.’

‘Not since Princess Diana emerged in an iconic black, off-the-shoulder Christina Stambolian cocktail dress and pearl choker on the very same day in June 1994 when her ex-husband, Prince Charles, admitted on national television he’d cheated on her, has a royal woman in transition sent such a potent message: you’re going to miss me when I’m gone.’ 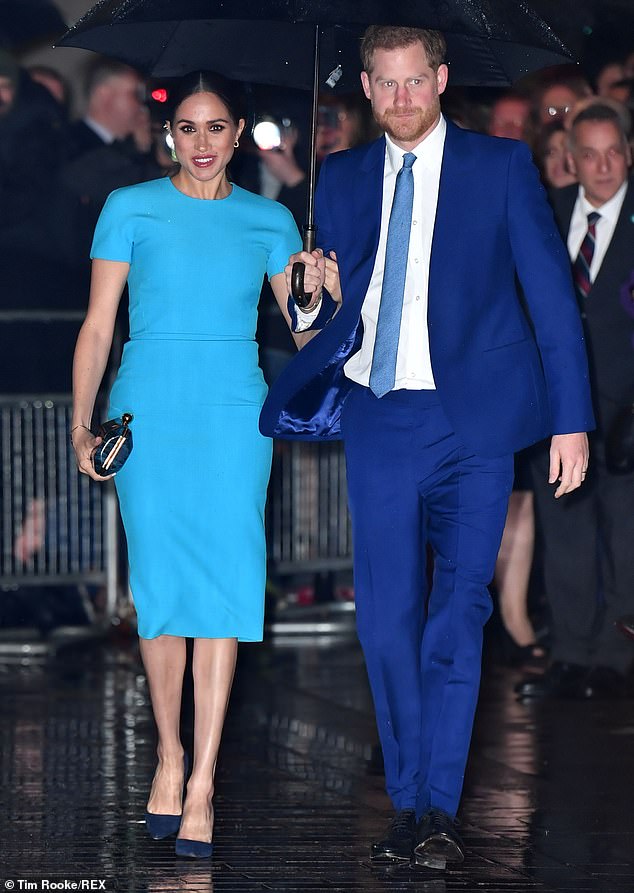 The Duchess of Sussex chose outfits that championed British designers and women-led brands. Pictured, in a £950 Victoria Beckham dress at the Endeavour Awards last Thursday

The Duke and Duchess of Sussex carried out a mix of private and public engagements in the UK over the last week.

Many were linked with their patronages and causes close to their hearts.

They are now thought to be back in Canada with their son, Archie, who will celebrate his first birthday in May.

Yesterday the couple shared details of private events they had attended during their most recent stint in the UK, including a meeting with global young leaders in their roles as President and Vice President of the Queen’s Commonwealth Trust.

The Duchess also hosted an event at Buckingham Palace in her role as Patron of the Association of Commonwealth Universities. 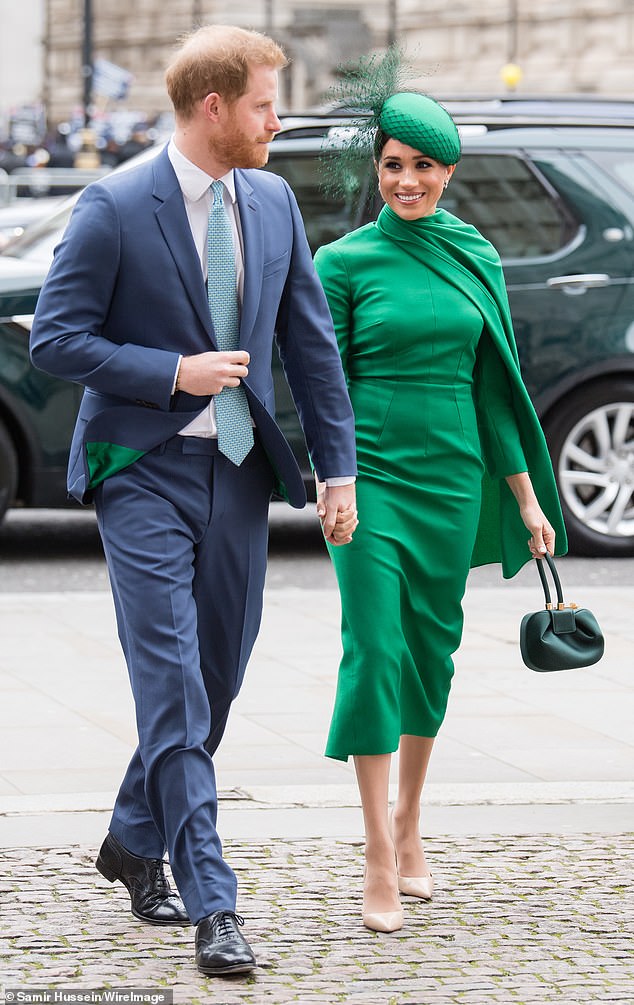 The looks culminated in a bespoke emerald green dress with caped detailing by Emilia Wickstead as she stepped out in public for the final time on Monday at the Commonwealth Day service at Westminster Abbey. Pictured, the Duke and Duchess arriving for the service