Deputy Prime Minister Michael McCormack has brushed aside speculation his predecessor Barnaby Joyce will challenge him for the Nationals leadership as soon as Monday, declaring himself unfazed by people “pushing personal ambition”.

Climate change would once again be used as the trigger for the leadership spill, with ructions in the junior Coalition partner over the government’s shift toward the goal of reaching net zero emissions by 2050.

The Australian Financial Review quoted a source on Saturday saying: “Barnaby’s got the numbers and the plan is to call a spill on Monday.” 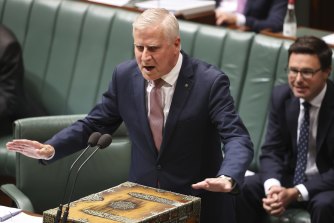 Mr McCormack, who has just completed a week as acting prime minister while Scott Morrison was overseas at the G7, said ordinary Australians were not interested in the Nationals’ leadership woes.

“I’m just concentrating on making sure the government addresses the issues of the pandemic, helps Victorians recover from the storms and the floods, ensures regional Australia can continue to be its best self,” he told The Sydney Morning Herald and The Age.

“If others want to push personal ambition then that’s a matter for them.”

Challenges from Mr Joyce have been rumoured in the past but not come to fruition. However, next week is the final parliamentary sitting week before the long winter recess – often called the “killing season” for political leaders – and there is less than a year until the next federal election. 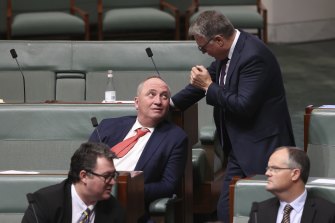 Federal Agriculture Minister David Littleproud, who has previously ruled out any potential challenge for the top job, has long been considered next-in-line.

One National Party minister told The Herald and The Age Mr Joyce did not have enough support to win back the leadership, and Mr Littleproud would be unwilling to mount a challenge.

“No one has the guts to challenge,” the minister said. “It’s always fractious, this is nothing new.”

Mr McCormack stint in the PM’s chair last week was not without event. In a memorable question time gaffe, he said government’s handling of the pandemic meant he would “much sooner live in Australia than anywhere else in the nation”.

Australia was a guest attendee of the Group of 7 in Britain last week, where world leaders agreed to “ambitious and accelerated efforts to achieve net zero greenhouse gas emissions as soon as possible and by 2050 at the latest”.

But at home, Resources Minister Keith Pitt, a member of the Nationals, told ABC Radio National Breakfast that was not a policy his party had endorsed.

“We have not committed to net zero by 2050,” he said. “That would require the agreement of the Nationals and that agreement has not been reached or sought.”