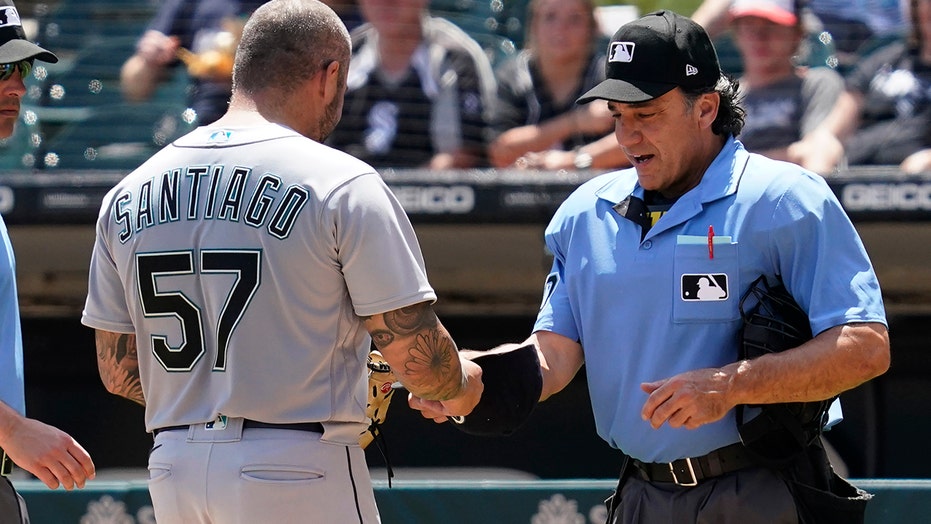 Seattle Mariners pitcher Hector Santiago made dubious history Sunday when he became the first pitcher to be ejected from a game in wake of MLB’s crackdown on grip-enhancing substances.

Santiago was ejected in the fifth inning of the first game of a doubleheader between the Mariners and the Chicago White Sox. His glove was also confiscated.

“He was ejected for when his glove was inspected, for having a foreign substance that was sticky on the inside palm of his glove,” umpire Tom Hallion told a pool reporter.

Santiago claimed it was just sweat and rosin on his mitt.

“I think once they take it back and check, it’s just sweat and rosin,” Santiago said after the game. “They’re going to inspect it and all this science stuff and it’s going to be sweat and rosin.”

Santiago could face a 10-game suspension, but there’s an appeals process.

Santiago said he was cited for the alleged illegal substance being in his glove and glove hand, not his pitching hand. Santiago is a lefty.

“If we’re not going to be able to use it on our hands, our arms, to keep that sweat from dripping down our hands, keep that slipperiness off the ball, let’s just get it out completely,” he added, via MLB.com.

MLB will inspect the glove to determine whether Santiago used a foreign substance or if it was actually sweat and rosin.