She is a successful society businesswoman and mother-of-five whose children are already forging their own successful paths in life, so Princess Marie-Chantal of Greece is certainly well placed to be offering parenting advice.

Together the family enjoy a life befitting of the world’s mega wealthy, splitting their time between their stunning Upper East Side New York home and holidays around the world. Recent jaunts have included a ski trip to exclusive St Moritz, Switzerland, and a shooting holiday on the English moors.

But while Marie-Chantal, whose own family was arguably even wealthier than the royal one she married into, has always enjoyed the finer things in life, she explained that when it comes to parenting things are surprisingly simple – and do not change based on how much money you have in the bank. 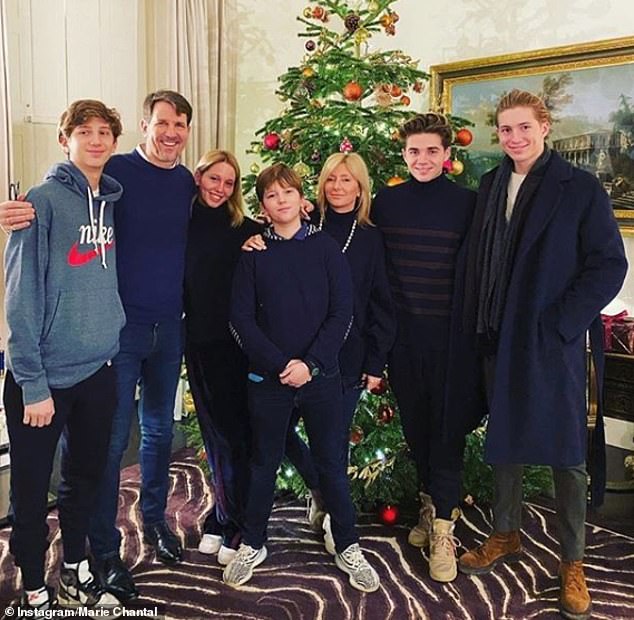 Society supermum: Princess Marie-Chantal of Greece, centre, with her husband Pavlos and their children (from left) Odysseas, 15, Olympia, 23, Aristidis, 11, Achileas, 19 and Constantine, 21, in a photo taken at Christmas. The mother-of-five shared her advice on parenting

For the well-heeled society supermum claims the key to raising successful children is to simply teach them the value of having good manners and conducting themselves in a courteous fashion.

‘It’s statistically proven that children who have beautiful manners do better in life,’ she explained in an interview with Hello! magazine. ‘That child will be remembered for being polite.’

Marie-Chantal shares her insights into raising children in her new book, Manners Begin at Breakfast: Modern Etiquette for Families, released this week.

In her interview with Hello!, she explained that it is important to start teaching children these lessons from a young age.

She said: ‘I believe children should be taught from a young age how to behave in a caring and mindful way. They need to be taught to be aware of others and to be instilled with these simple values when they are still so sponge-like.’

Fashionista: Olympia, a model who’s become a regular fixtures on front rows around the world, revealed that she had always been raised to be hardworking and have good manners. Pictured, at New York Fashion Week last month (left) and on holiday in Japan last year (right) 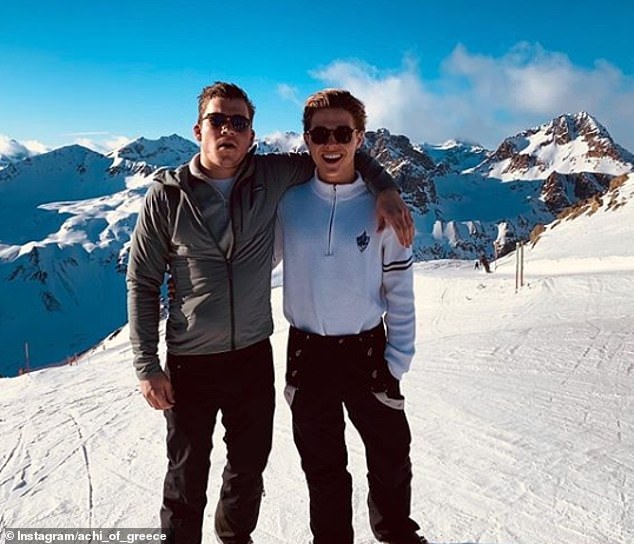 Social media star: Marie-Chantal’s middle child, Achileas, 19, boasts almost 200,000 followers on Instagram. He shared this snap of him with a friend on a recent ski trip

‘Once children are older the lessons are much harder to just accept. I certainly like to think Olympia has taken it all on board,’ she said, referring to her eldest.

Olympia, a model who’s become a regular fixtures on front rows around the world, agreed that she had always been raised to be hardworking and have good manners.

And it appears her mother’s lessons are paying off. She is barely in her 20s but already Olympia has a global profile most women twice her age could only dream of having, but yet has managed to avoid any major public misstep.

And it looks as though her two oldest brothers are set to follow in her footsteps. Here, a look at Marie-Chantal’s accomplished children. 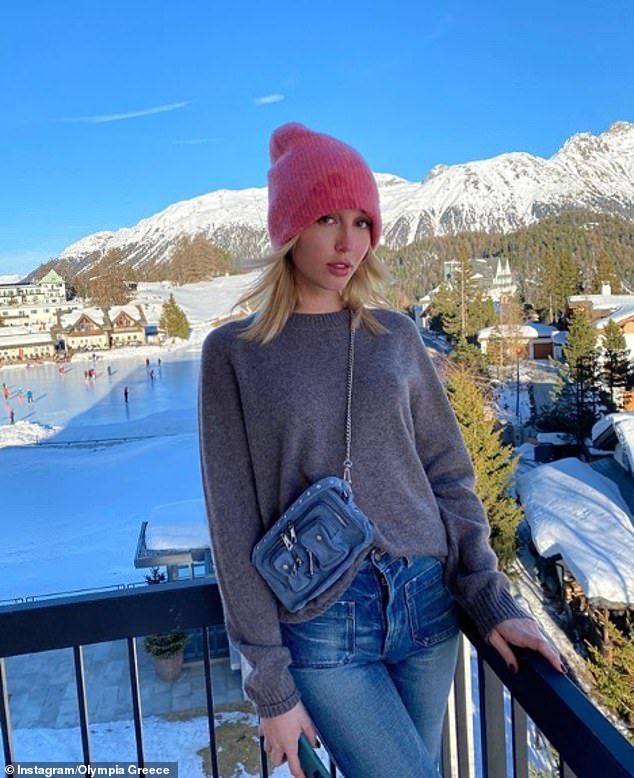 Society belle: Olympia is barely in her 20s but already Olympia has a global profile most women twice her age could only dream of having. Pictured, in St Moritz last month

Model and socialite Olympia, 23, is one of the ringleaders of the next generation of society movers and shakers.

The blonde beauty was recently seen on a St Moritz ski trip with a gaggle of equally well-heeled young women – including two Greek shipping heiresses – and popped up on the front rows of fashion week shows last month.

Olympia also enjoys a close relationship with her cousin, Talita von Fürstenberg, and they appear frequently in each other’s glamorous Instagram snaps.

But it is not all just parties and glamorous appearances for Olympia, she also graduated from New York University’s Gallatin School, which allows students with broad interests to shape their own majors. 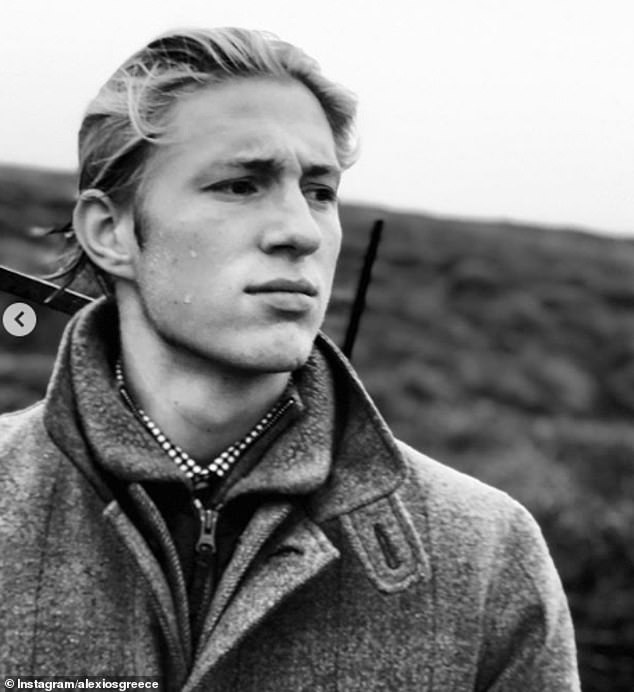 Lower profile: Constantine was educated at Wellington College, Berkshire, before moving to the US to study at the prestigious Georgetown University in Washington D.C. He stays out of the spotlight – and off social media – more than his siblings. Pictured, in an Instagram snap

Named after his paternal grandfather, Prince Constantine is second-in-line to the former Greek throne, after his father.

Marie-Chantal and Pavlos relocated the entire family to New York four years ago, partly so they could be closer to Constantine and Olympia while they were studying.

Unlike his older sister, Constantine stays largely out of the spotlight and posts sparingly on social media. However he does appear in photos shared by his mother and siblings.

Constantine is extremely well connected to European monarchies. He counts King Felipe of Spain, the Duke of Cambridge and Crown Princess Victoria of Sweden among his godparents. 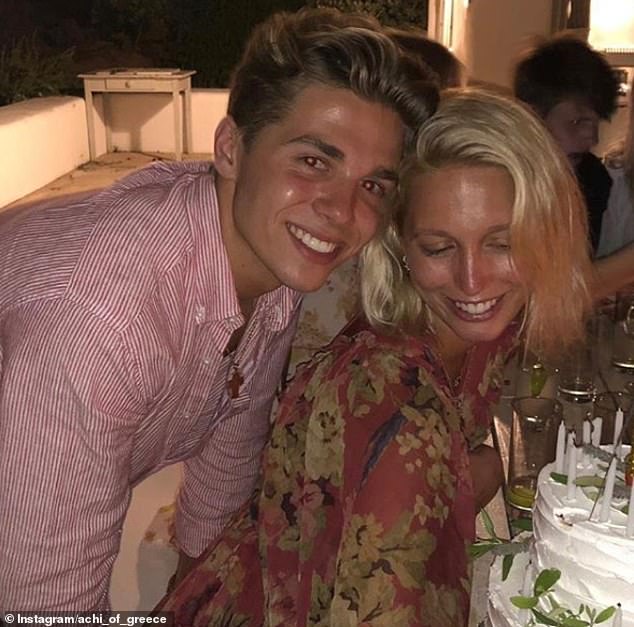 Destined for greatness: Achileas is a frequent Instagram user, where he shares posts of his family, friends, and five-star holidays with his 196,000 followers. The 19-year-old posted this adorable snap of him and Olympia to celebrate her birthday last year 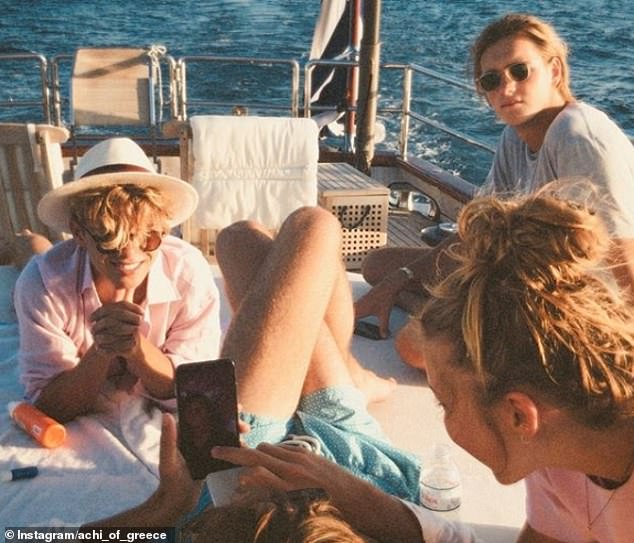 Jet-set: Achileas prompted comments of envy when he shared this photo from a boat trip in Greece last summer. The girl in the photo is Lila Grace Moss, daughter of Kate Moss

He is still finding his way, but early signs suggest Achileas might follow his sister and become a figure on the global social circuit.

The 19-year-old is a frequent Instagram user, where he shares posts of his family, friends, and five-star holidays with his 196,000 followers. Among his circle of friends is Lila Grace Moss, the 17-year-old daughter of model Kate Moss.

He is clearly close to his siblings and has shared several sweet posts talking about how much he loves them.

The talented teenager has also hinted that he might want to appear on screen one day, and has already made a guest appearance on US soap opera the Bold and the Beautiful.