Manchester City’s Premier League match with Arsenal on Wednesday has been postponed as a “precautionary measure” and several Gunners players are in self-isolation after Olympiakos owner Evangelos Marinakis contracted coronavirus.

Arsenal say Marinakis, 52, met a number of their players when the Gunners hosted the Greek side in a Europa League match two weeks ago.

Marinakis – who also owns Championship side Nottingham Forest – said on Tuesday he had tested positive for Covid-19.

Olympiakos will host Wolves in the Europa League on Thursday after Uefa rejected Wolves’ request for the last-16 first-leg match to be postponed.

The Premier League says it has no plans to postpone any other matches and “all necessary measures are being taken”.

Brighton say their home game against Arsenal on Saturday (15:00 GMT) “remains scheduled to go ahead as planned”.

“The risk is considered extremely low with the self-isolation period for those players ending on Thursday,” the Seagulls said.

The disease, which can cause a fever, cough and breathing problems, is spreading around the world and has already affected more than 116,000 people.

It has impacted on the staging of sport events around the world, with Italy’s Serie A suspended and French and Spanish top-flight games being played behind closed doors.

European matches involving Manchester United, Rangers and Chelsea will be held behind closed doors in Austria and Germany in the coming days, but this is the first match in the UK to be affected.

The postponement means Premier League leaders Liverpool can no longer win their first title since 1990 this weekend.

Liverpool would have been crowned champions if City had lost to Arsenal at Etihad Stadium and then also been beaten by Burnley on Saturday.

Arsenal said some players – which the club have not identified – “met the Olympiakos owner immediately following the game”.

“The medical advice we have received puts the risk of them developing Covid-19 at extremely low. However, we are strictly following the government guidelines which recommend that anyone coming into close contact with someone with the virus should self-isolate at home for 14 days from the last time they had contact.

“As a result, the players are unavailable for tonight’s match against Manchester City and the Premier League has decided the game should be postponed.

“The players will remain at their homes until the 14-day period expires. Four Arsenal staff, who were sitting close to Mr Marinakis during the match will also remain at home until the 14 days are complete.” 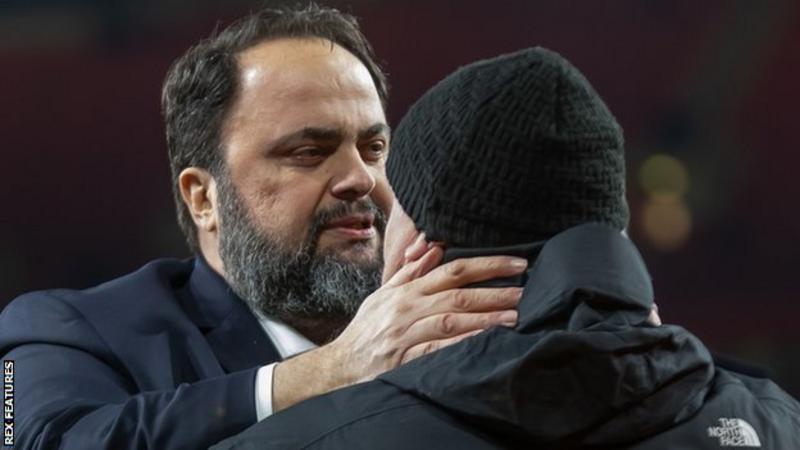 The 14-day period ends on Friday and Arsenal said they were “looking forward” to the players returning to work before their Premier League game at Brighton on Saturday, 14 March.

Scientists have confirmed it takes an average of five days for symptoms to show.

The club said it would refund supporters with tickets and was also contacting other Arsenal staff or guests who shared the directors’ box restaurant during the game on 27 February.

“We understand this will cause inconvenience and cost to fans planning to attend the game but Arsenal, Manchester City and the Premier League have agreed that the short notice of Mr Marinakis’ infection means there is no alternative but to take the time to complete a proper assessment of risk,” the Premier League said in a statement.

Until now, UK domestic football had not followed other European nations in postponing fixtures, holding matches behind closed doors, or capping attendances.

All sport in Italy has been suspended until at least 3 April because of coronavirus, but this does not include Italian clubs or national teams participating in international competitions.

Wolves’ Europa League last-16 first-leg match at Olympiakos on Thursday will also be played in a near-empty stadium, as will Rangers’ second-leg tie at Bayer Leverkusen on 19 March in the same competition.

Uefa rejected Wolves’ request to postpone the match in Greece – which the club said was an “unnecessary risk”.

“There are some things that are more important than football,” they added.

“The good health of our pack and the general public is one of them.

“Our position is that the trip poses an unnecessary risks to our players, staff, supporters and the families of all who travel, at such critical and uncertain times.

“Our concern is also for our opponents, whose players and staff have today been tested, and will now be expected to play their part in an important fixture, under the difficult and challenging circumstances of their owner suffering with the virus,” added Wolves.

On Wednesday, Olympiakos said the players, board members and staff that were tested for coronavirus had returned negative results.

The Greek government announced on Sunday that all professional sports events for the next two weeks will be played without spectators.

Spanish side Getafe are reportedly refusing to travel to Italy to face Inter Milan in their Europa League match on Thursday.

The Spanish (AFE) and Italian (AIC) players’ unions have asked Uefa that games between Italian and Spanish teams be suspended.

The AFE has also called for the suspension of all matches in Spain instead of being played behind closed doors.