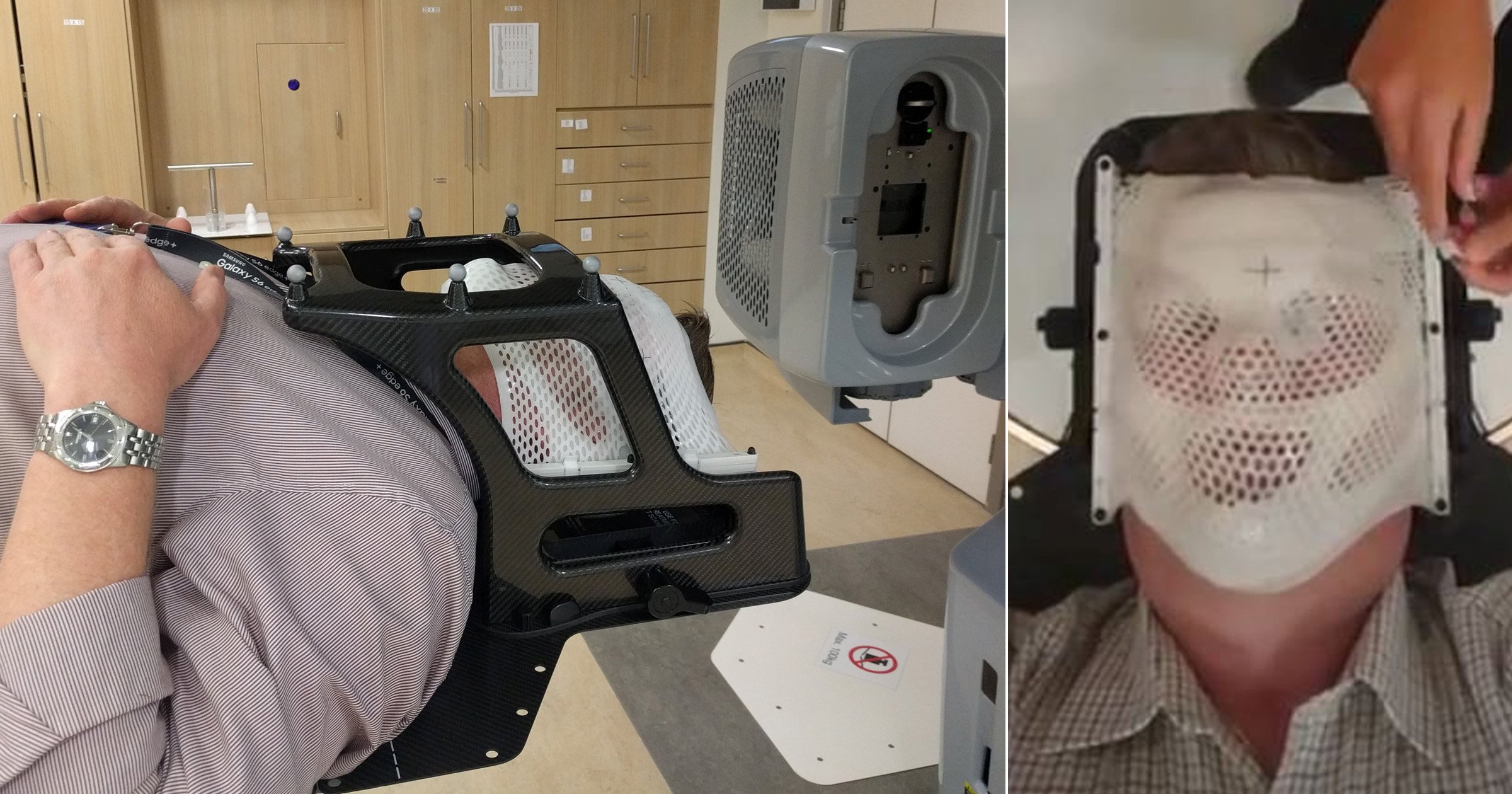 Nick Thomas, 50, first started having problems with his vision in 2012.

He underwent a series of MRI scans, was diagnosed with a swollen optic nerve, and his vision returned six months later with no further treatment.

Nick thought that was the end of the issue until a year later when he was referred back to his consultant after being turned down for travel insurance following a routine paperwork check.

Thanks to the nudge from the travel insurance company, doctors found an inoperable mass on Nick’s brain.

He said: ‘I had a letter from the insurance assessors to say they couldn’t offer me insurance for my work trip and that I should speak with my consultant as they may have missed something on my scans.

‘I had another scan at the John Radcliffe Hospital in Oxford which confirmed I had a brain tumour.

‘As soon as I saw the word tumour I panicked and was referred from ophthalmology to neurology.

‘I felt calmer upon speaking to a doctor who said I would be monitored with regular scans and assess any treatment based on each scan result.’

Nick, from Oxfordshire, has a low-grade meningioma, which is a slow-growing tumour that starts growing in the brain or spinal cord.

Symptoms can include vision changes, loss of hearing or smell, confusion, seizures, and headaches that are at their worst in the morning.

Doctors scanned Nick’s head regularly to keep an eye on the tumour, but in 2016, they realised it had grown by a couple of centimetres.

He went through six weeks of radiotherapy and, now in the care of JR neurological consultant Jane Halliday, has scans every two years.

Since he was diagnosed Nick has undertaken a variety of fitness feats to raise funds for Brain Tumour Research.

He’s even run the London Marathon and inspired Jane to take on the challenge as well, with the pair having raised a combined total of more than £15,000 so far.

Nick said: ‘Jane made me feel instantly comfortable and took the time to talk to me.

‘We chatted about our hobbies and I told her that I had completed the London Marathon from Brain Tumour Research.

‘She was stunned by my achievement, so much so that she was signed up half an hour later and ran as part of the charity team on 2 October 2022.

‘We often forget the impact that our actions or words can have on the people around us.

‘When Jane told me she had a place in the Brain Tumour Research team after our chat I was overwhelmed with emotion.

‘Running isn’t something that comes naturally to me and I have picked up a few injuries during my training, so this will be a challenge for me.’

Nick’s next run will be the Oxford Half Marathon on 16 October – if you want to help, you can donate via his JustGiving page.

Mel Tiley, community development manager at Brain Tumour Research, said: ‘Nick is determined to lead a fulfilled life after being diagnosed with a brain tumour.

‘He has generously poured his time into stepping out of his comfort zone and with it raised thousands which will be used to fund vital research into the disease.

‘He has also proved to be a wonderful ambassador for the charity, inspiring Jane’s challenge which shows the sense of coming together and community that comes with a devastating diagnosis.

‘We wish Nick the best of luck in his running challenge.’