Home » Lifestyle » 'Losing my limbs helped to save my relationship' 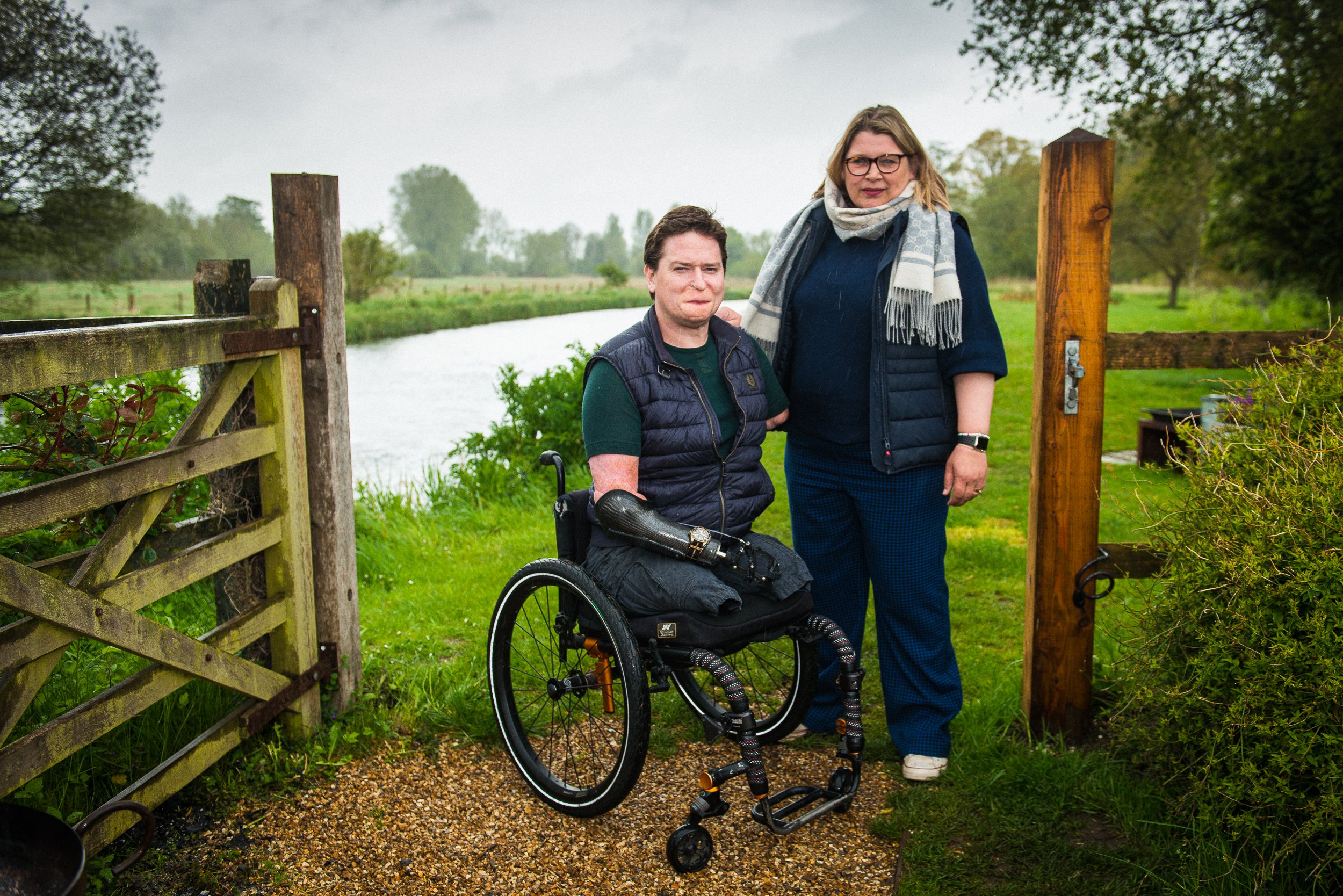 When Alex Lewis, an active and healthy 33-year-old father of a two-year-old boy, woke up with a cold in early November 2013, he thought little of it.

But within the month, he had lost his legs and an arm to Strep A Toxic Shock Syndrome.

He was rushed to hospital semi-conscious, and was put on life support. When he woke from an induced coma four days later, doctors told him, the only chance of boosting his chances of survival was to have his arms and legs removed.

‘I went ballistic,’ recalls Alex. ‘Soon afterwards a trauma psychologist explained very simply that I would die if my limbs were not amputated.

‘I wanted to live and so from that moment on amputations made sense.’

Alex spent seven harrowing months in hospital and during that time he endured three gruelling amputations.

‘The strep was trying to reach my heart to kill me and so my left arm was amputated, then both legs.’

Worse was to come. ‘By Christmas Day, my condition left me looking like I had chocolate smeared on my face due to necrotising fasciitis and when my son, Sam, came to see me in hospital, he didn’t recognise me and hid behind his mum, my partner, Lucy.

‘He was afraid of his own dad. I understood, but it had a massive impact on my mental health. After they left, I burst into tears. It was the worst thing that had ever happened to me. I would have rather gone through more amputations than have had that experience.’

The nurses were keen to revive Alex’s spirits and so asked Lucy what they could do. She told them that the only other thing he loved as much as his son was his Labrador, Holly. At 9pm on Christmas Day, Holly burst through the double doors to the ward. Alex was elated.

‘Seeing my Labrador lifted my spirits. She went around every bed in the ward and just created this burst of energy in all of us. That random act of kindness was and still is one of my finest memories ever. It made me realise that it wasn’t just me who was fighting, everyone was fighting for me – my family, my dog, my friends, nurses and doctors. It was a turning point. From then on I resolved to be a partner worth staying with, a father who is present and just a better person in general.’

After leaving hospital in June the following year, Alex found himself back inside again the next month.

This time his right arm was amputated, after he rolled over in bed and snapped it in half. Despite such drastic measures, Alex’s chance of survival was just 3%.

Since July 2014, Alex has spent a total of 18 months going in and out of hospital for treatment including work on his nose, which he partly lost and his lips, which morphed into a small gap, the size of a five pence coin.

‘I had part of my nose replaced with skin from my back and skin was surgically taken from my shoulders and implanted on my face to provide lips,’ explains Alex.

‘It was a world-first operation to rebuild my face to give me a proper-sized mouth opening.’

Before sickness struck, Alex was living with his son and Lucy above the pub he ran. While Alex didn’t have any specific health issues, he did drink heavily.
During his first spell in hospital he realised that drinking was the result of unhappiness because he ‘was not doing much with his life’.

‘I used to start drinking at midday and stop drinking at one or two in the morning,’ adds Alex.

‘I drank 12-15 pints of beer a day and 2-3 bottles of wine, seven days a week. I was a functioning alcoholic and never appeared drunk.’

He still drinks, but now it’s much more moderately. His relationship with Lucy is ‘better than ever’. ‘Becoming a quadruple amputee has enhanced our relationship tenfold. Lucy probably would have left me because I was drinking a lot and not doing much.’

He describes his relationship with his son, now ten, as ‘incredible’. ‘He is really caring and will do anything for me. My condition has been a real education for him. Strep came along at the right time and woke me up to what I had; it made me realise that there was so much more to the life that I was living.’

When asked about regrets, Alex admits: ‘I regret being too laid-back in my first 33 years of life. I was so lazy that I didn’t go to university or pass my driving test. Driving is something that I will still be able do now, should I pass my driving test this time, but I would need someone in the car with me, at all times.’

These days, Alex is a high-achieving, socially conscious entrepreneur. He and Lucy have five businesses between them including a wine business, a trust focused on university research and a public speaking business.

‘I’ve learnt to love my disability,’ he says. ‘It makes me different, offers up millions of opportunities and makes me fight hard for my family while having a tonne of fun. It’s a great journey.’

Alex has gone on to achieve some remarkable feats – and raised money for charity at the same time. He has cycled up a mountain in Ethiopia, kayaked in Namibia and cage dived in shark-infested waters.

‘For me, it’s important to show Sam that my disability will never stop me achieving some incredible things. He’s electricity to my engine, he makes me strive for more.’ Alex describes the last seven years of his life as ‘amazing’ because he has spent it maximising both his mind and body.

And the good news for Alex is that his condition will not stop him from living a long and productive life, as long as he eats healthily.

‘I’m so happy with my life that if someone told me that I can get my arms and legs back tomorrow, I’d say no thanks, I’ve achieved more without them!’

Find out more about Alex’s story on his website.

Get in touch at [email protected]