Brexit Minister LORD FROST: The EU must stop point scoring and work with us to protect the peace

Just two weeks ago the European Parliament finally ratified our agreement with the EU. Now we can start to make it work.

This agreement gives us full control over our own laws, courts, borders and money. It ends alignment with the EU and thereby gives us freedom to reach trade agreements with the rest of the world.

That is all I have always wanted from Brexit – free trade and friendly relations with our neighbours as a sovereign country. That is what Britain has stood for over the best part of two centuries since the repeal of the Corn Laws in 1846.

After the interlude of EU membership, we are going back to our roots.

We are doing so in a positive and pragmatic way. That’s how I want to work with my opposite number, Commissioner Maros Sefcovic. 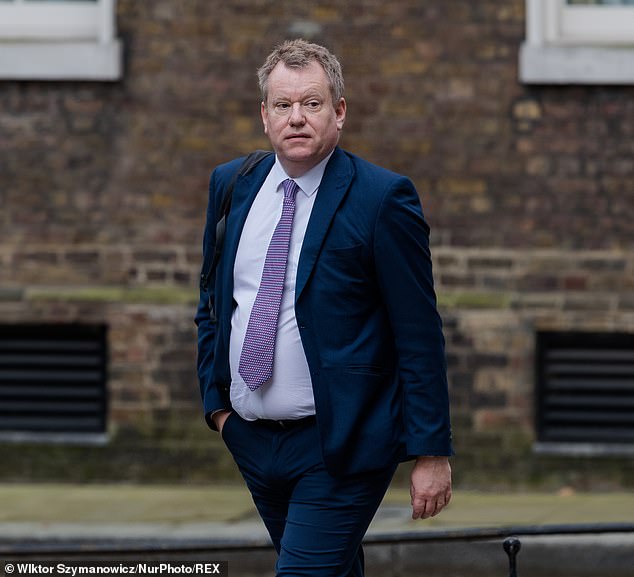 Two weeks ago, the European Parliament ratified our agreement with the EU. It gives us control over our laws, borders and money, says Brexit Minister Lord Frost (pictured on February 24)

It’s true that we could be forgiven for thinking, after the past few months, that our European friends have not all seen things in the same way.

From the unfortunate attempt to put a hard border on the island of Ireland for vaccine exports, to the threats to cut off electricity to Jersey or to retaliate against our financial services, we haven’t always heard much enthusiasm to make things work.

Equally we know that, at a practical level, European authorities have co-operated constructively with us to keep goods and lorries moving through new customs controls and the challenges presented by Covid.

We did not see the queues in Kent that many expected and goods exports to the EU are now back above last year’s levels.

This is a big change in our relationship. Things may well continue to be a bit bumpy. But where there are difficulties we can work through them as sovereign equals.

Defending our interests when that is necessary – as we showed in Jersey recently – but always being constructive when we can.

But one area remains unsettled. Our new relationship with the EU won’t be right until we have dealt with the problems arising from the Northern Ireland Protocol.

The Protocol as we now have it was a huge improvement on the old ‘backstop’ which it replaced. This would have kept the whole of the UK locked in the EU customs union and single market until the EU gave us the keys.

The fundamental aims behind this new Protocol are worthy ones – to protect the peace process and the Belfast (Good Friday) Agreement, to support Northern Ireland’s prosperity by keeping borders and trade open, and to minimise disruption to everyday life in Northern Ireland.

It is perfectly possible to deliver those aims while at the same time protecting the EU’s single market – but not in the way the Protocol is currently operating.

I saw this for myself this week when visiting Arcadia, a deli which has been an institution in Belfast for the best part of a century.

Its shoppers have always been able to choose from a variety of goods, from artisan jams, to pork pies, to Norfolk sausages, from all over the UK. 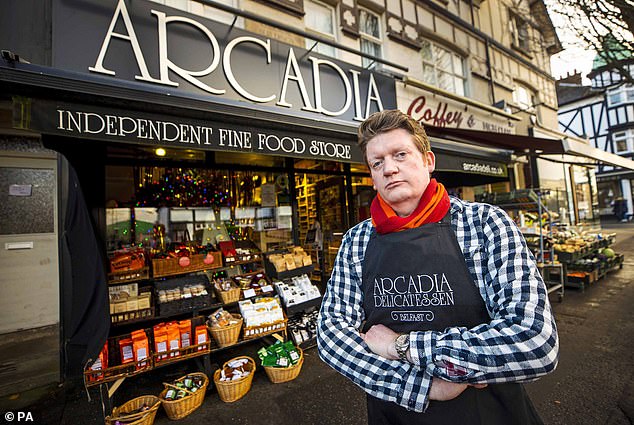 David Frost said shoppers at Belfast deli Arcadia (pictured: owner Mark Brown), have always been able to choose from a variety of goods from all over the UK but choices may now shrink

But now the choice on their shelves may shrink fast. Stores like this are reporting that their small suppliers based in the rest of the UK are beginning to stop sending them their products.

They find it too difficult and too time-consuming to deal with the paperwork. This means less choice for Northern Ireland consumers than in the rest of the UK.

This is just one snapshot. It isn’t just local delis feeling the effects. Businesses have been putting in extraordinary efforts to make things work. But risks to the supply of all kinds of products remain and may well get worse as the year progresses.

Yet there is no evidence that goods not meeting EU standards are getting into the EU’s single market via Northern Ireland.

All this paperwork and checks – to deal with a risk that does not exist.

The EU takes a very purist view of all this. It seems to want to treat goods moving to Northern Ireland from the rest of the UK in the same way as the arrival of a vast Chinese container ship at Rotterdam. We did not anticipate this when we agreed the Protocol and it makes no sense.

I totally understand why this makes unionism in Northern Ireland anxious and why consent for the Protocol is now fragile. Protests have been occurring and political stability is at risk.

Our overriding aim has always been to protect the Belfast (Good Friday) Agreement. If the Protocol is not protecting it, it is not working.

The EU has a responsibility here. The Protocol is a shared UK-EU agreement. The EU needs, rapidly, to find a new approach and new solutions.

Northern Ireland is fully part of our UK union. We have seen this in action with the vaccine rollout and the furlough scheme.

If the Protocol operates so as to damage the political, social, or economic fabric of life in Northern Ireland, then that situation cannot be sustained for long.

We are responsible for protecting the peace and prosperity of everyone in Northern Ireland and we will continue to consider all our options for doing so.

So my message to our friends in Europe is: stop the point-scoring and work with us. Seize the moment, help find a new approach to Northern Ireland, and then we can build a new relationship for the future.