Home » Lifestyle » Liverpool’s Trent Alexander-Arnold backed a 19-year-old youngster to be the club’s next star, and hailed the impact of $54 million summer signing Diogo Jota 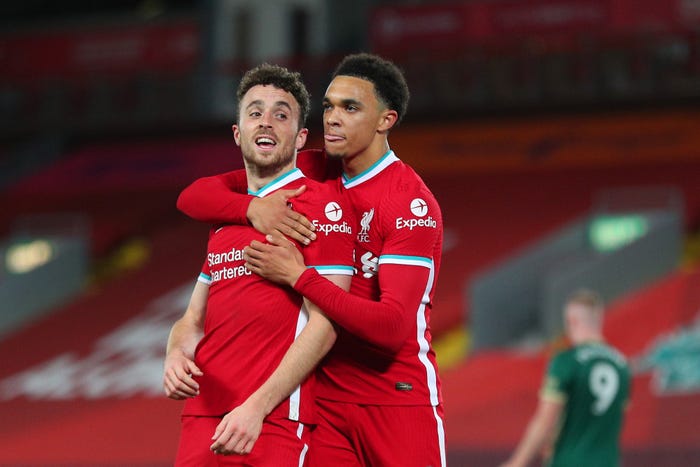 Speaking exclusively to Insider, Trent Alexander-Arnold has hailed the impact of Diogo Jota at Liverpool this season, and has backed one of the club's most promising young stars to become an Anfield superstar.

Liverpool spent $54 million to bring Jota to Merseyside from Wolverhampton Wanderers this summer and the Portugal international has since been a revelation, scoring nine goals in 17 games, including a sublime Champions League hat-trick against Atalanta in November.

The 24-year-old, however, suffered a knee injury in Liverpool's most recent Champions League fixture against FC Midtjylland and will now be sidelined for six to eight weeks – further deepening the Red's injury crisis.

Star defender Virgil van Dijk was ruled out for the season in October after finding himself on the end of a calamitous tackle from Everton goalkeeper Jordan Pickford, while Joe Gomez is also expected to miss a large chunk of the campaign after suffering a knee injury while on international duty with England.

Xherdan Shaqiri, Joel Matip, and James Milner are also currently out, as is summer signing Thiago Alcantara, who despite only playing just twice this season, has also been lauded by Alexander-Arnold.

Speaking about his Liverpool teammates, Alexander-Arnold said that he believes, Curtis Jones, a 19-year-old midfielder will "100%" became a Liverpool regular in the near future.

Liverpool take on Tottenham at home on Wednesday evening, where a win will see it jump ahead of Jose Mourinho's side to the top of the English Premier League table.

Alexander-Arnold spoke to Insider as part of his partnership with massage gun developer Therabody, which he started using during his rehab earlier this season.