LEON EDWARDS will punch his ticket to a welterweight title shot this weekend by smoking Nate Diaz, according to former middleweight champion Michael Bisping.

The pride of Birmingham, 29, will throw down with the youngest Diaz brother early on Sunday morning at UFC 263 in Glendale, Arizona 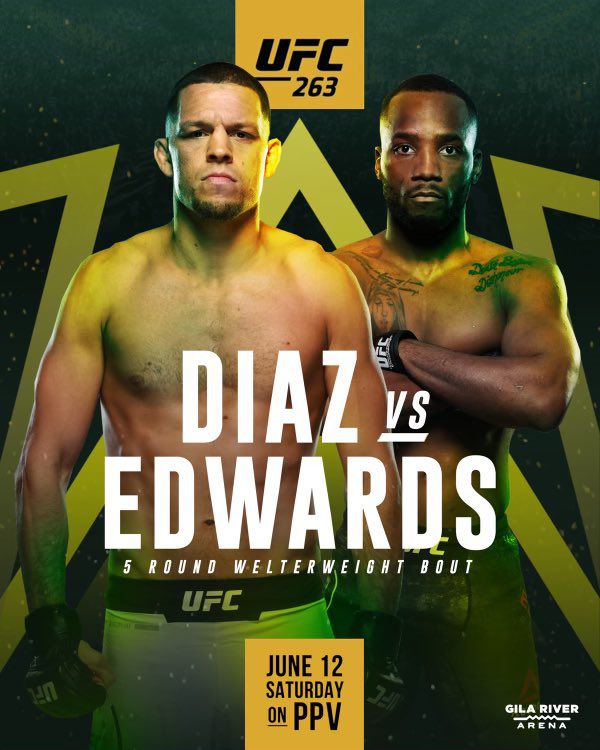 Fan favourite Diaz enters the tasty 170lb clash on the back of a 19-month layoff following his brutal beating at the hands of Jorge Masvidal at UFC 244.

And Bisping is expecting Edwards to have similar success against the Stockton slugger, telling SunSport: "Leon Edwards, he's going to smoke Nate Diaz. That's a fact. Simple as that.

"Put your money on Leon all day long. Bet your house on him. He's going to beat Nate and then he'll probably get a title shot."

Bisping has the utmost respect for the battle-weathered Diaz but reckons the Ultimate Fighter season five winner is in way over his head against the in-form 'Rocky'.

Britain's first and only UFC champion added: "All respect to Nate Diaz.

"I'm not talking bad about Nate Diaz. I think he's a tremendous fighter and I've got a lot of respect for him.

"He came up to welterweight a few years ago and it didn't really go to plan.

"I just remember Rory MacDonald giving him a nasty beating. He was just too big for him.

"And when you look at Leon and Rory MacDonald, there's a lot of similarities in the way they fight and the skills that they have and just how good they are."

"Leon is tremendous. He's had an incredible run, he's so technical, he's got no weak areas. Diaz, again, he's tough as hell.

"This being a five-round fight, I do believe it's good for Diaz.

"Because I think the only way Diaz could win is if he waits for Leon to get tired in the later rounds and maybe take advantage of that.

"I don't think that will happen.

"But we know Diaz is a triathlete, always [has] incredible cardio ability and he's tough as hell.

"I'm not taking anything away from Diaz, I just think Leon is that good.

"He's that explosive, that powerful, that sharp – he's like a sniper in there.

"I fail to see how Diaz can beat him, to be honest."

A rematch with welterweight king Kamaru Usman could be handed to Edwards should he make a statement in the Arizona desert.

But Bisping reckons the Brummie faces an uphill task to end The Nigerian Nightmare's reign of terror in the stacked 170lb division.

He said: "The problem for him is Kamaru is incredible. It's going to be tough.

"It's a tough road with Kamaru at the top. And I say that with the maximum respect to Leon Edwards."