Home » Lifestyle » Lana Del Rey Wants to Collaborate With the Migos: 'I Love Them'

Lana Del Rey has worked with various artists throughout her lengthy career. Over the years, the Grammy-nominated singer has worked with rappers, despite much of her music shying away from traditional hip-hop sounds.

Lana Del Rey wants to make a song with the Migos

Del Rey has collaborated with A$AP Rocky and Playboi Carti on songs before; Rocky even appeared in the music video for her 2012 hit “National Anthem.”

In December 2021, Del Rey attended Variety’s Hitmakers Brunch award ceremony and spoke on the red carpet about who she would love to work with in the future: Atlanta-bred hip-hop group Migos.

“I love them. Everything they do,” the singer said. “There was kind of like a new revolution of sound 11 years ago in the singer-songwriter community, which I loved seeing. And then with Migos, I think they kicked off a new super fun, super autobiographical, completely different style of rap. I love them.”

Del Rey’s appreciation for hip-hop dates back years. In a 2012 interview with Italian publication R&B Junk, she said “I f***ing love Eminem” and dubbed him “the master of lyrics.”

Eminem responded — sort of — in a 2014 cypher promoting the Shady Records compilation Shady XV. Slim Shady took the stage in a group freestyle after artists such as Royce Da 5’9″ and Yelawolf and rapped how he really felt about Del Rey.

“But I may fight for gay rights, especially if they d*** is more of a knockout than Janay Rice / Play nice? B**** I’ll punch Lana Del Rey right in the face twice, like Ray Rice in broad daylight in the plain sight of the elevator surveillance / ’Til her head is banging on the railing, then celebrate with the Ravens,” Eminem said. 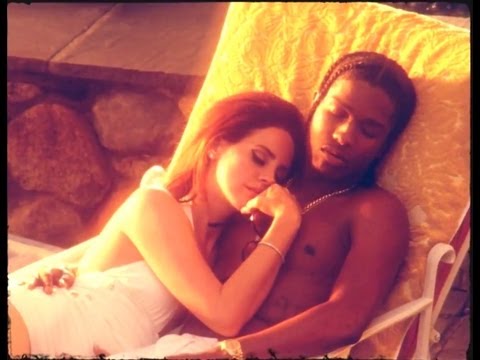 In the past, Del Rey herself has had a bone to pick with rappers and other women singers in the industry. In May 2020, in a now-deleted infamous Instagram post, Del Rey posed a “question to the culture” and revealed she was fed up with “female writers and alt singers” saying she glamorizes abuse in her music.

“Now that Doja Cat, Ariana, Camila, Cardi B, Kehlani, and Nicki Minaj and Beyoncé have had number ones with songs about being sexy, wearing no clothes, f*****g, cheating etc – can I please go back to singing about being embodied, feeling beautiful by being in love even if the relationship is not perfect, or dancing for money – or whatever I want – without being crucified or saying that I’m glamorizing abuse??????” she said.