The pressure will be on Kourtney Kardashian during Part 2 of E!’s “Keeping Up with the Kardashians” reunion, with Andy Cohen putting both her and Scott Disick on the spot about their relationship.

In this sneak peek at Sunday’s episode, the two are asked whether Scott would “have a shot” with his ex if he had maintained his sobriety. Disick believed that, “Yes,” he would, to which Kourt agreed. “Yeah, probably,” she said.

The moment caught Kylie Jenner by surprise, who had an audible reaction to the pair’s candor and exclaimed, “Sorry, this is just so deep!”

Cohen then asked a viewer question wondering whether the two exes have slept together in the last five years. The audience member just couldn’t wrap their head around the fact they’ve gone on vacations together, but never crossed that line.

“People cannot believe that, but we have not,” said Kourtney. “For real.” 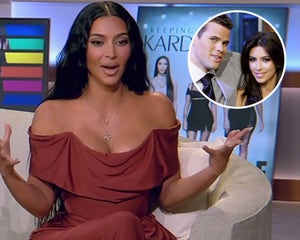 When asked how the two are now, Kourtney said she felt like they were “great friends and coparents,” while Scott said the two were “family” and always would be.

Disick explained that his drinking led to his bad behavior when they were together, saying that he didn’t want to make excuses, but he “definitely wouldn’t have done these things sober.” He admitted everything he did “was all wrong” and said that now, monogamy was what he aspired to.

Andy also noted that Scott seems “upset” whenever Kourtney is linked to other men. Scott said, “No,” before joking under his breath, “I just want to kill them.”

“The last guy, let’s all be honest,” he added, while Khloe Kardashian interjected, “Nobody was happy with the last one!” They didn’t say who exactly they were talking about, but her last serious boyfriend before Travis Barker was Younes Bendjima — someone Khloe has been very vocal about in the past.

“Scott and everyone else didn’t like him,” added Kourntey.

Part 2 of the KUWTK reunion airs Sunday on E!

Kris Jenner Spills on Caitlyn Split During KUWTK Reunion, Whether She Has 'Fond Memories'