Katy Perry had a custom corset to wear to the Met Gala, and she liked it … so she posted about it on Instagram.

The “Never Worn White” singer shared an image of the custom bodice with a cone bra that she was slated to wear to this year’s Met Gala. The annual fundraising event for the Metropolitan Museum of Art’s Costume Institute in New York City was postponed indefinitely this year to stop the spread of the coronavirus, leading stars like Perry to share the looks they would’ve worn.

Perry is currently pregnant with her first child with fiancé Orlando Bloom, so the bodice features a rounded part over the stomach to suit her changing body.

The 35-year-old captioned the post: “what would have been…”

Gaultier created the now-infamous pink conical bra that Madonna wore on her Blond Ambition tour and debuted in Chiba, Japan, in 1990. An iteration of the look debuted on the runway in 1987 and, after Madonna asked for Gaultier to design her tour looks, the pair later collaborated to create the silhouette that would become “so embedded within the canon of both pop music and fashion that it now requires little introduction,” according to Vogue. 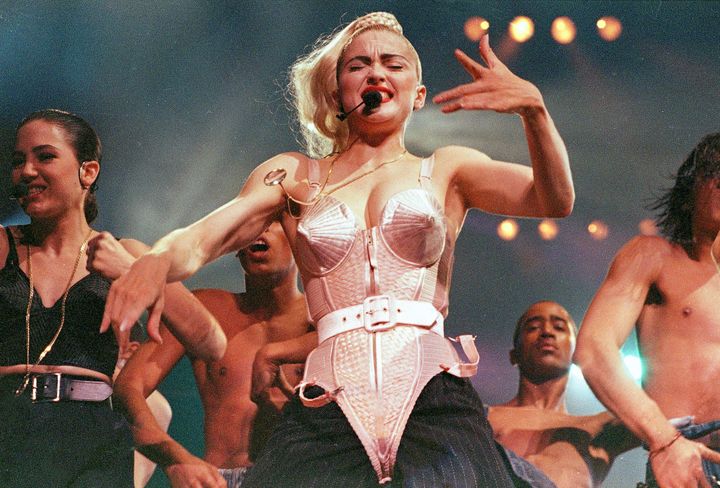 Perry’s Madonna-inspired look would have been apropos for the fête’s proposed 2020 theme: “About Time: Fashion and Duration.”

Of the theme, Andrew Bolton, the Costume Institute’s curator, told The New York Times that fashion “is indelibly connected to time.”

“It not only reflects and represents the spirit of the times, but it also changes and develops with the times,” he said.