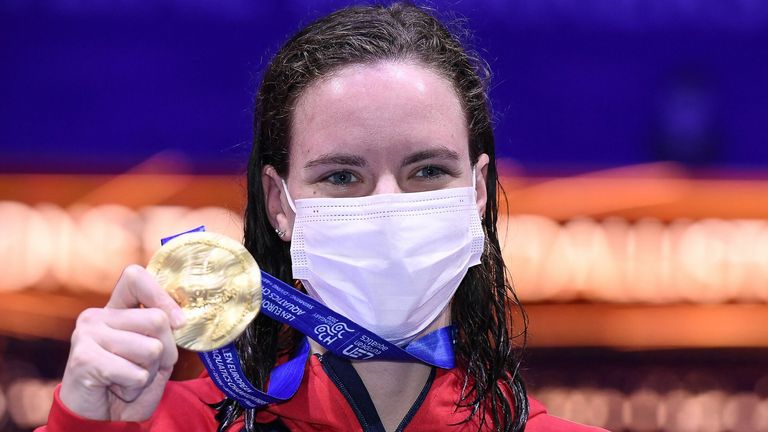 Britain’s Kathleen Dawson shrugged off the annulling of her victory in the women’s 100 metres backstroke at the European Aquatics Championships by winning gold at the second attempt on Friday evening.

Dawson celebrated after winning the first race in 58.18 seconds in Budapest, but Sweden protested, and it was found a faulty speaker had stopped their swimmer Louise Hansson from hearing the starting buzzer.

The race was rerun two hours later but Dawson did not let the situation affect her, winning again in 58.49secs.

The 23-year-old Scot said on len.eu: “I’m ecstatic about this win, I’ve been very consistent throughout this competition so I’m happy to see all end well.

“I’m quite impressed with myself. I admit, I was slightly disappointed when I found out I had to swim again tonight. But my coach told me I could do it again easily. So then I just focused again and got ready to go.”

Dutchwoman Kira Toussaint was the big loser, dropping from second to fourth, with Margherita Panziera of Italy doing the opposite. Russian Maria Kameneva finished third both times, while Britain’s Cassie Wild was fifth in both races.

There were two more gold medals on another successful night for Britain, with Molly Renshaw winning the women’s 200m breaststroke final and the women’s 4x200m freestyle team also claiming victory.

Renshaw said: “I’m extremely happy, this is my first gold medal in this event. The semi-final was very strong and I’m really satisfied because I didn’t expect to swim as fast as I did in the final.”

Duncan Scott and Tom Dean took silver and bronze in the men’s 200m freestyle behind Russian Martin Malyutin, while Adam Peaty was the fastest qualifier for the men’s 50m breaststroke final and Luke Greenbank dominated the men’s 200m backstroke, knocking nearly a second off his British record in two swims on Friday.