Queen of the supermarket! Kate Middleton was spotted carrying Prince Louis in her arms during a Sunday shopping trip to Sainsbury’s while Princess Charlotte looked at dresses

An eagle-eyed royal watcher has revealed how she spotted Kate Middleton visiting Sainsbury’s in Norfolk over the weekend with her three ‘very well behaved’ children in tow.

Kate Carter saw the Duchess of Cambridge, 38, popping into the King’s Lynn supermarket, which is located close to the royal’s countryside home Anmer Hall, on Sunday morning.

She revealed that the royal carried Prince Louis, 1, in her arms, while Princess Charlotte, 4, browsed the dresses in the supermarket, with Prince George, 6, also joining the gang on the shopping trip.

Speaking to Hello magazine, Kate revealed: ‘She is absolutely beautiful, and the children were beautiful. They were so well behaved.’ 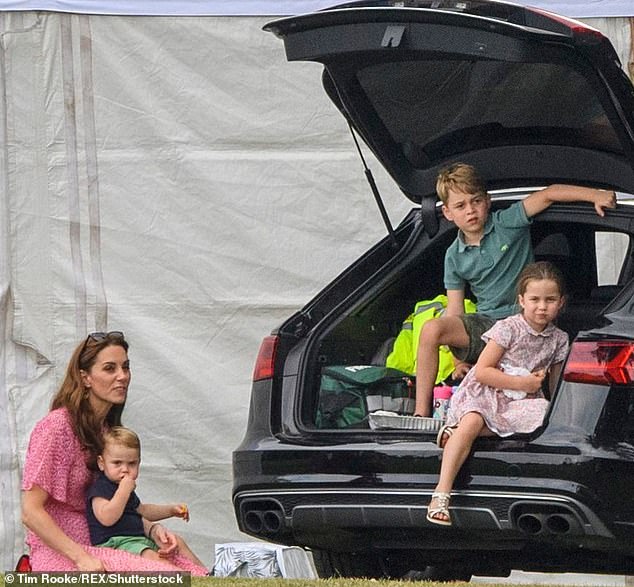 Supermarket shopper Kate Carter revealed how she saw the Duchess of Cambridge, 38, with Prince George, 6, Princess Charlotte, 4, and Prince Louis, 1, in Sainsbury’s over the weekend (pictured, together during the polo in Wokingham last July)

Kate, who was shopping in the store for supplies with her two-year-old daughter, was in disbelief when she saw the Duchess was just two feet away from her during her shopping trip.

She said she’d initially spotted Princess Charlotte because she was wearing the green jacket she wore to the Sandringham Christmas day service.

The little royal stole the show when she stepped out in the £140 Amaia’s Razorbil  emerald green coat in December.

Kate also revealed how the diligent royal was carrying Prince Louis in her arms and said she looked ‘lovely’ for the Sunday morning trip to the supermarket. 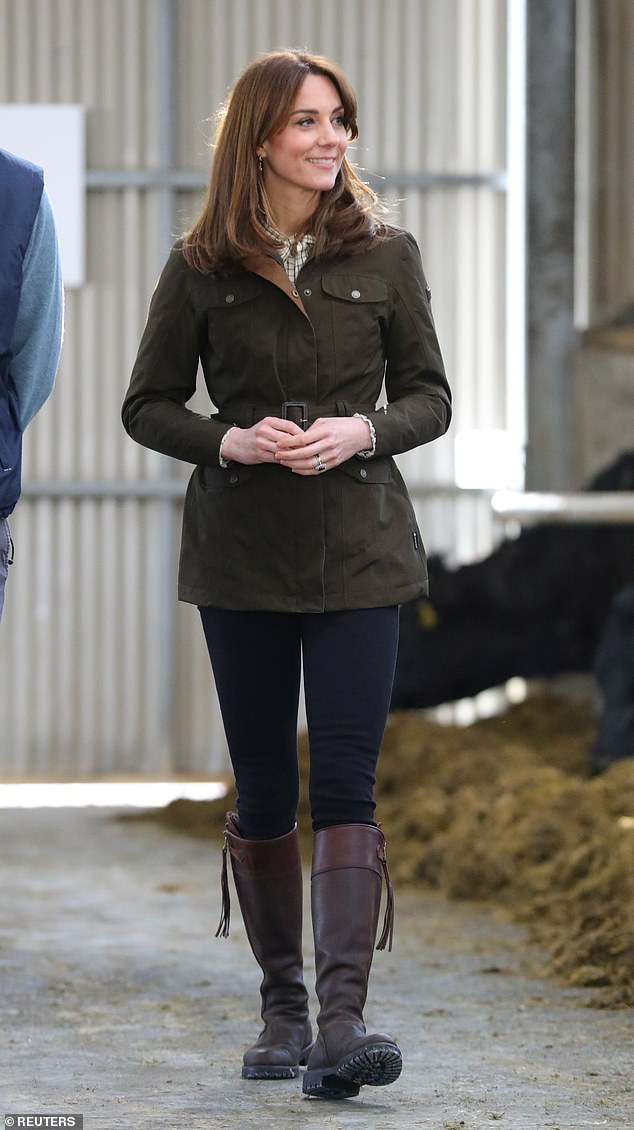 The royal watcher said Kate Middleton looked ‘beautiful’ while the children were ‘so well behaved’ on their shopping trip  (pictured, the Duchess on a recent outing in Ireland earlier this month) 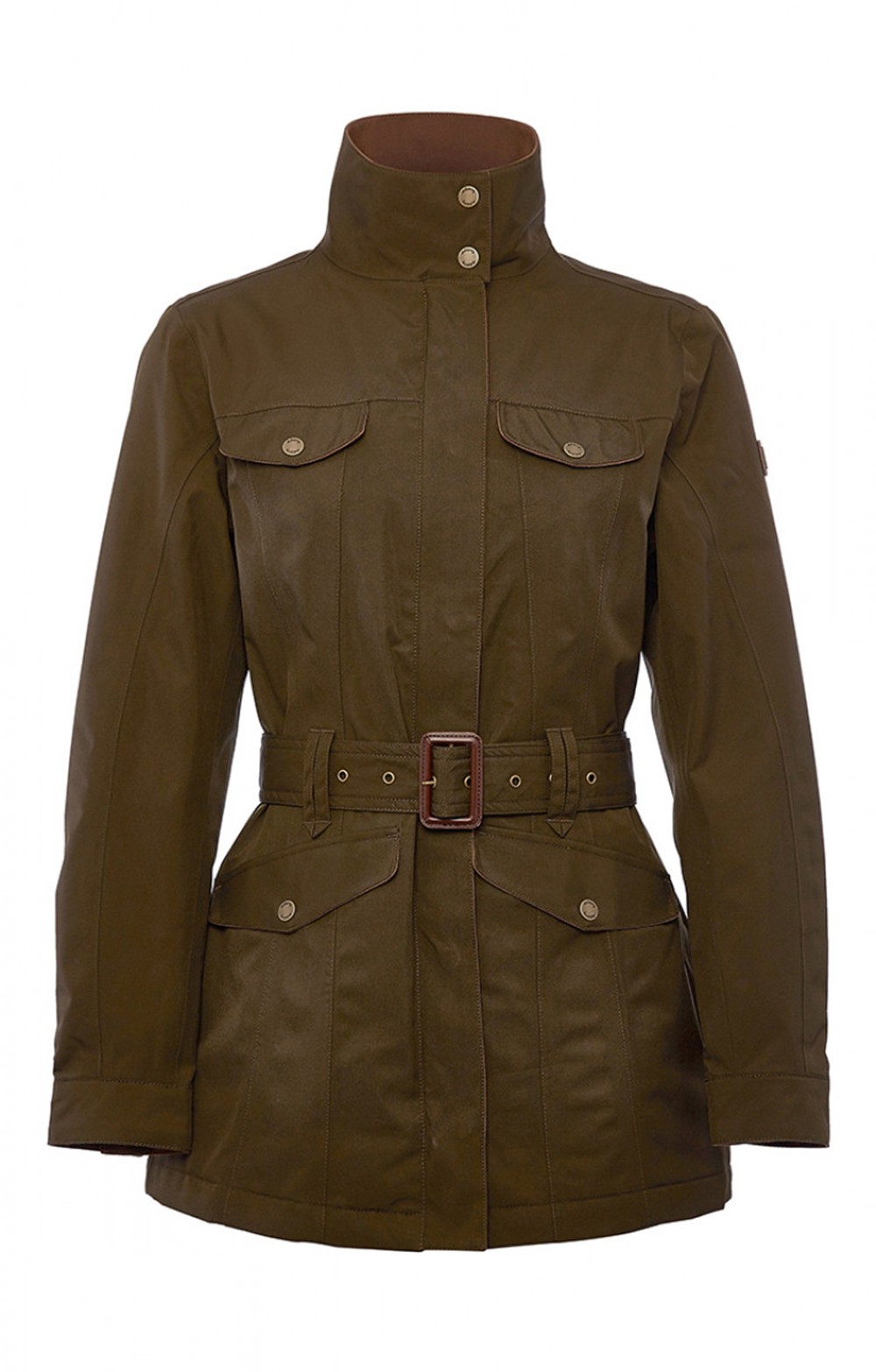 The Cambridges were looking at the clothes and ‘having a little’ walk around the store, while Princess Charlotte had her eye on some dresses.

Kate explained: ‘Charlotte was looking at the dresses, she was dead cute.’

It’s not the only low-key shopping trip the Duchess has taken recently, with the royal stepping out on her local high street in London at the beginning of the month. 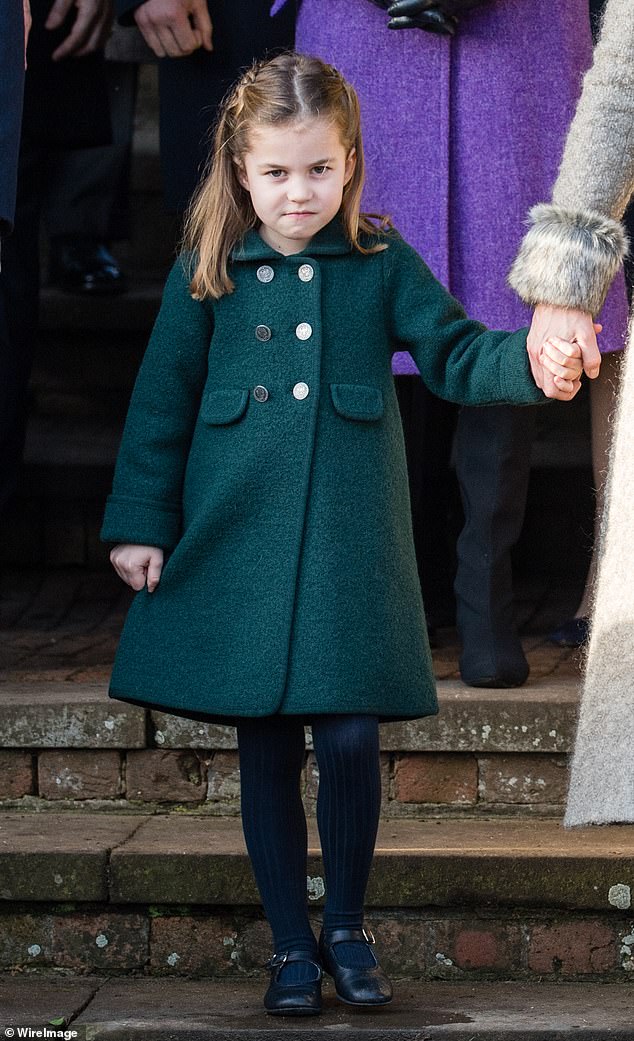 According to the royal watcher, Princess Charlotte was wearing her £140 Amaia’s Razorbil emerald green coat, which she first wore on Christmas day, for the outing

The royal was snapped carrying a huge bag of books as she stepped out of the Waterstones store near her Kensington Palace Home.

A source told MailOnline that the mother-of-three had asked Waterstones staff for history and military-themed books for children.

Kate has a keen interest in the development of young children and could well have been stocking up on books for her own children; Prince George, Princess Charlotte, and Prince Louis.