A Florida woman verbally attacked a group of teenagers with homophobic slurs and the kids put up an impressive front by not letting her faze them.

In a viral video shared Saturday on Reddit, the woman can be seen wildly screaming in the faces of the teens during a shopping spree at a Jacksonville convenience store. 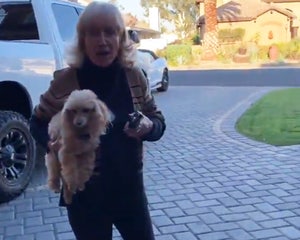 “Are you a queer?” shouts the woman. “What are you? You like it up the a–hole? Cause you look like you like it up your a–hole.”

One of the teen girls replies, “What does that even mean?”

As the woman chases after the teens — who begin laughing hysterically —  the girl adds, “Are you ok?”

An incomprehensible onslaught continues before the woman abruptly stops and exclaims, “Well, then goddamn back the f— up b—-!”

The woman and the amateur videographer then agree to call the police to see if the woman should, in fact, get behind a steering wheel. After a few more indiscernible taunts, the woman decides involving the cops isn’t the best idea and attempts one last insult.

“You look like you grew up in a trailer park,” she spews.

The teen fires back, “You would know.”

The comments section lit up after the one-minute clip was posted, as one user wrote, “Classic Karen moment,” while another quipped, “B—- started speaking cursive at :40 ?”

Watch it all go down, above.