Johnny Depp performs on stage in Glasgow after trial win

Much more than a vanity project, the 13-track album opens with an instrumental cover of Midnight Walker, written by Irish folk musician Davy Spillane. It is sublimely beautiful, with dreamy guitar breaks that soar deep into blissful rock ‘n’ roll nirvana. 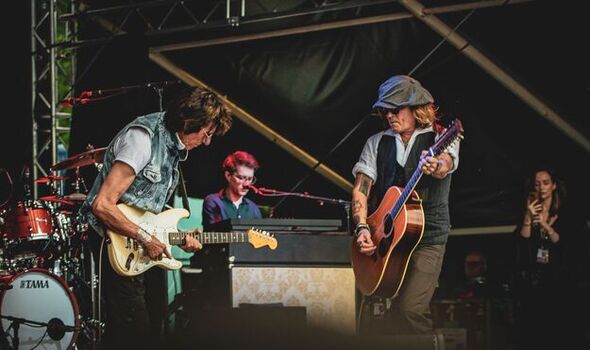 That is followed by a far darker, driving version of Killing Joke’s Death And Resurrection Show, with superb stinging lead guitar and death-rattle vocals.

There are two originals, both composed by rhythm guitarist and singer Depp, who famously co-founded supergroup Hollywood Vampires with Alice Cooper and Joe Perry a decade ago.

The first, Sad Motherf****n’ Parade, is atmospheric blues rock with spoken verses recited by Johnny in a voice as deep and dangerous as a derelict mine.

The second, This Is A Song For Miss Hedy Lamarr, a poignant homage to the Hollywood star, was the catalyst for this project. Depp asked Beck to play lead guitar on the track and Jeff was so blown away by it that he suggested they make an album.

Other covers include Motown classics and songs by John Lennon, The Velvet Underground, and The Beach Boys. Dennis Wilson’s Time slows the pace and again sets the controls for air guitar heaven.

You would have to be either a deluded maniac or a genius to think you can do justice to numbers like Marvin Gaye’s What’s Going On or The Everly Brothers’ Let It Be Me and yet, through talent and sheer chutzpah, they do.

The musicianship is incredible. The Beach Boys’ Don’t Put Your Head (On My Shoulder) gets a gorgeous, guitar-led instrumental interpretation, and it all reaches an emotional climax with Lennon’s painwracked Isolation.