Home » Lifestyle » ‘I’ve got to get this job’: A Chorus Line lays bare the pleasure and pain of performers

Tim Draxl is walking through a group of dancers, counting out their steps and issuing instructions in a sharp voice: “Step, kick, kick, leap, kick, touch … Again!” 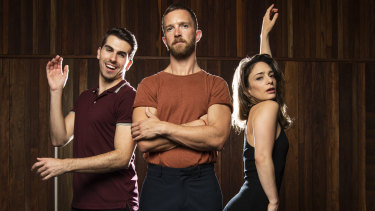 Around him, the dancers follow his instructions, their shoes making a soft thud as they land after each jump or twirl, a sweaty picture of concentration and determination. Cue the singing: “I hope I get it … I really need this job. Please God, I need this job. I've got to get this job.”

Based on interviews with real-life Broadway performers, the musical follows 17 dancers as they audition for a demanding director, Zach – played by Draxl – for a part in the ensemble of a Broadway show. However, it’s not just the dancing Zach is interested in, he wants to get to know the performers, so he asks each of them to step forward and tell their story.

When the show premiered in 1975, it was hailed as an anti-musical musical – in an era of flashy Broadway shows, it had no real set to speak of, just a bare stage; no central star, just an ensemble; and no costumes until the end, just the dancers in their rehearsal clothes. It was, as original cast member Baayork Lee described it in 2013, “the first reality show”.

The critics agreed, heaping praise on creator and choreographer Michael Bennett – The New York Times lauded it as a “hard squint at Broadway babies on parade” and “devastatingly effective”. The awards flowed, including nine Tonys and a Pulitzer for drama, and it went on to become the longest-running production on Broadway with more than 6000 performances (it was eventually beaten by Cats in 1987).

A movie starring Michael Douglas and directed by Richard Attenborough followed in 1985, but with its tinny '80s score, new Flashdance-style choreography and outfits so high-cut they would make a builder blush, it was panned by critics, with The Washington Post comparing it to a “soccer match seen only from the waist up. They’ve cut off the feet”.

Sitting at home watching the movie on VHS, however, were legions of wannabe dancers, including choreographer Amy Campbell, who was busy jumping off the sofa pretending to be one of the dancers.

“I liked how naughty it was,” she says. “I watched the film first – I didn't see the stage show – and I would have been maybe six. So there I was, stuffing my crop top to have tits and arse, as referred to in the show. It was unashamed and unapologetic about what it was.

“I'd already had this fascination with dance and to see all these amazing dancers on screen, telling these really truthful and in-depth stories, plus dancing amazingly, my imagination just kicked off.” (As a side note, Campbell wasn’t the only one inspired – the song she is talking about, Dance Ten, Looks Three, is also the inspiration behind the title of Annabel Crabb and Leigh Sales’ popular podcast Chat 10, Looks 3.) 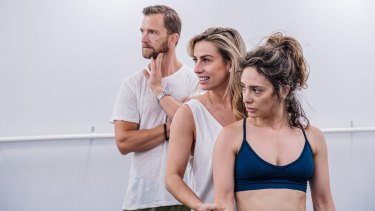 Now, more than two decades after she first saw the film, and a celebrated career that has involved everything from placing third on So You Think You Can Dance Australia to choreographing for Opera Australia, Campbell is turning that imagination to A Chorus Line – not only directing the production for Darlinghurst Theatre Company but also introducing new choreography.

Hang on, doesn’t she remember Barry Fife’s famous ultimatum in Strictly Ballroom: “There are no new steps!”

“There are a million different ways to interpret a story,” she says, laughing. “I'm really respectful and think the original is just brilliant. So I'm not trying to emulate that or think I can do it better, I'm just coming at it 50 years later, with a new way of moving, and taking the essence of the show but putting it on for a 2020 audience.”

What is being left alone, however, is the show’s 1975 setting and the stories each performer tells of their climb to the top, or in some cases, lower middle. It is still very much a love letter to the perseverance of actors, singers and dancers who deal with professional rejection on a daily basis.

“Early on in your career, it feels really personal,” says Campbell, who calls the show the ultimate role for a triple-threat performer. “It feels like you're just not good enough, not pretty enough, not attractive enough, not talented enough. Then, when you build a career and start to get a little bit more experienced, you realise it's just this huge industry that sometimes you slot in and out of and it's not personal.”

Except when it is.

“I worked for a casting agency a long time ago,” continues Campbell. “And the director made a choice to cast someone different to who was the best for the job, because she looked like his ex-girlfriend. It can be that finicky and silly and and you can't help that, you don't know that you look like the last person that person dated.”

It’s not just up-and-coming performers who struggle with auditions, either. Even Draxl, who signed a recording contract when he was 16 and has been singing and acting on stage and screen ever since, has had difficulties.

“I remember being asked to audition for a role, one role I really wanted, and they called me back in to read for one of the supporting roles and the whole time I was singing this song – and when you get up in an audition room, there’s a panel of people, it’s like being in front of a firing squad – not one of the 12 people sitting in front of me was listening to what I was doing. I was literally looking down the table, and they were all on their phone or chatting with each other. 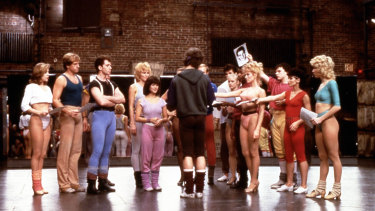 A scene from the 1985 film A Chorus Line, as the dancers hand over their headshots after being picked to go through to the next round of auditions.

“I wish now I’d had the guts to say, ‘You know what, I’m going to stop. When you guys are ready, I’ll continue.’ But in the moment, with the nerves and everything, you just keep going. It was so degrading and I remember walking out of there and thinking, I’m never going to put myself in that situation again.”

Building that professional resilience can be tough, says Draxl, who is sitting with his castmates Angelique Cassimatis and Daniel Assetta in the rehearsal hall of the East Sydney Community and Arts Centre in Darlinghurst.

“There have been so many times in my career when I’ve thought, ‘I can’t do this any more, I’m going to quit, I’m going to call my agent, I just can’t deal with this any more,’ ” says Draxl, as Cassimatis and Assetta voice their agreement. “I hate being at other people’s mercy and not having that control of your own career, because it does depend on what work is available, what productions come into town.

“There’s no real security, even when you’re at the top. You hear stories about Nicole Kidman before she got Big Little Lies, she was drifting around, she didn’t have anything to do, so she created something for herself. We are constantly living in hope of the next job and it’s when that hope is taken away from you and your guts are just torn from you, it’s a lot but you do find a way to get around it and get on top again.”

So how do they deal with it?

“You just let it go and move on,” says Assetta, who plays Paul, a talented singer who auditions with his tone-deaf wife Kristine. “Because there is always something else you have to look forward to. And if you dwell on the past, it’s just going to get you down and it’s a vicious cycle.”

Adds Cassimatis, who plays Cassie, a former headliner who has returned to the trenches – the chorus – just to try and get work: “Everyone deals with it differently. But it’s not a bad thing to go and chat to someone and be like, ‘I’m in a hole I can’t seem to get out of’. It’s really important, especially when you’re that low and not really knowing where to go next. It’s helped me, it’s helped my friends.”

Draxl agrees: “When I spoke out about dealing with depression, which I’ve dealt with on and off throughout my whole career, and I’ve been in the industry for more than 20 years, people go, ‘Oh wow, I had no idea,’ and that in itself will help somebody else and encourage them to speak up and out about it. We’ve lost way too many people in this industry to suicide and it doesn’t have to be like that.” 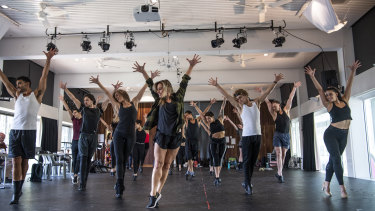 Choreographer Amy Campbell (centre) puts the cast of A Chorus Line through their paces during rehearsals at the East Sydney Community and Arts Centre. Credit:Louise Kennerley

For all the hard work, though, A Chorus Line looks like a lot of fun for a performer.

“It’s the only show that you get to see the process that each performer goes through to get to the job,” says Cassimatis. “Usually you only see the end product, which is the show, but never the audition, never the ridiculous hoops the directors or choreographers make you jump through.

“Sometimes you don’t have to do any of the work in those bloody auditions that you have to do in the actual show, it’s almost to see what you can do for shits and giggles.”

It has to be said, too, that while the 17 dancers are sweating it out, auditioning for that vital spot,  Draxl has it pretty easy – all he has to do is remember how to count to eight.

“It’s not that easy!” he protests. “Saying the dance steps in time is pretty tricky because it’s all timed – the first whole section is almost 12 minutes of me just talking to music in time while they’re dancing and it’s very distracting because they’re very, very good dancers – they’re amazing.”

Assetta adds: “We’re all tripping by the end, of course.”

Draxl: “They’re sweating like you wouldn’t believe but the energy is quite amazing.”

“Not sure about ponchos,” she says, laughing. “But maybe everybody gets a sweat band and they can just join in the fun of 1975.”

A Chorus Line is at the Eternity Theatre, Darlinghurst, from March 13 to April 19.