A pandemic modeller advising the Australian government has declined to tell the public how many Australians they expect to die or become critically unwell in the course of the coronavirus crisis.

But Professor Jodie McVernon, director of epidemiology at the Doherty Institute, has shed light on the behind-the-scenes work, including the reason the government is keeping schools open and why their worst-case scenario has proven correct. 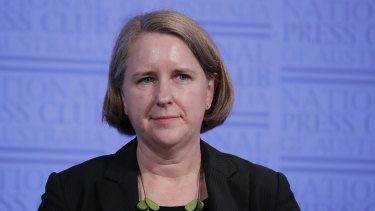 She is part of a team of pandemic modellers, infectious disease and public health experts advising the government every day on its coronavirus response for the past eight weeks.

"We are not coming to these questions naively or without prior thought. [We are] coming with tools we've prepared earlier," she said.

So far six people have died with COVID-19 in Australia and 568 have tested positive for SARS-CoV-2. NSW Health authorities are expecting 20 per cent of the population could contract the virus in the first wave – 5 per cent would need intensive care and 1 per cent would die.

But Professor McVernon refused to disclose what the advisors' current modelling indicated when it came to projected mortality and morbidity rates for coronavirus in Australia.

"I will not give you a number to tell you where this is going or how bad it's going to be, because we have also just implemented a suite of interventions and we will continue to monitor how that is going," she told the National Press Club on Wednesday, hours after Prime Minister Scott Morrison announced unprecedented restrictions on overseas travel and restricting mass gatherings.

"We converged early on the expectation that this was the worst case we were preparing for, for say an influenza pandemic, and as time has emerged that's become clear," Professor McVernon said.

“We always knew, we knew on the 3rd of February, that there [would] come a point when it would be inevitable that our capacity could not completely put out every spark.

"Now we are moving to the 'flattening the curve' phase", Professor McVernon said.

Professor McVernon and her Australian colleagues are parts of a global network of modellers who share information “rapidly, openly and freely … so that in these times of vast uncertainty we can together arrive at a clear understanding of the threat our world is facing”.

The Australian modellers join their counterparts around the world at least once a week for a meeting convened by the World Health Organisation.

In early February, "based on what we could see of the virus we all had a pretty good idea that it was spreading very rapidly", she said.

Most of their early disease intelligence came from media reports and web scraping, an unprecedented function of our interconnected and media-saturated times.

Professor McVernon said it had become clear that asymptomatic people, or people who had not yet developed symptoms, could spread the virus.

Quarantining was vital in concert with social distancing measures to "help those of us who do not know we might be spreading an infection to prevent making others unwell", she said.

"This is what we model in flattening the curve. It's not magical," she said.

"We would like to do better than that if we could, but that will be longer. Singapore is telling its people, it will take 12 months. But what we all firmly believe is that a strategy that says we should try to keep the virus out and suppress it all together until there's a vaccine."

On the topic of closing schools, Professor McVernon said the advisers looked to Singapore and Hong Kong.

Both countries focused on aggressively looking for cases of COVID-19 and quarantining. Hong Kong closed schools and Singapore has not.

Influenza modelling from Hong Kong suggested closing schools reduced transmission by 15 per cent where domestic workers stay at home with children and keep them at home.

In contrast, "there is very little evidence in Australia of how well we would actually be able to reduce them mixing in other settings", Professor McVernon said.

About 30 per cent of Hong Kong's success in reducing transmission was due to social distancing.

"So we think the bulk of success in Hong Kong has been about wider social change," Professor McVernon said.

"The fact that children are not actually experiencing severe infection and can probably be better managed in their social context in school, under supervision than they would be out of school," she said.