“The opportunity to do it once is something you can only dream of. The opportunity to do it twice is nuts,” says Jerrold Smith II of the hit series Sweet Life: Los Angeles, which he stars on. Issa Rae’s successful reality show has returned for Season 2, now streaming, and it’s back with some changes, both in terms of who is showing up in front of the camera and what’s going on behind it.

For Smith, he’s seen some shifts in his friendships and a major one in his relationship. He’s officially a fiancé, engaged to co-star and high school sweetheart Cheryl Des Vignes. The couple announced their engagement in June, and he has the show, in part, to thank for where they are now.

“I’m elated. I’m so thankful to the entire process of Sweet Life and the kind of steps it made me take in our relationship,” he tells ESSENCE. A part of Season 1 was spent with Des Vignes trying to persuade him to move in together. She succeeded. 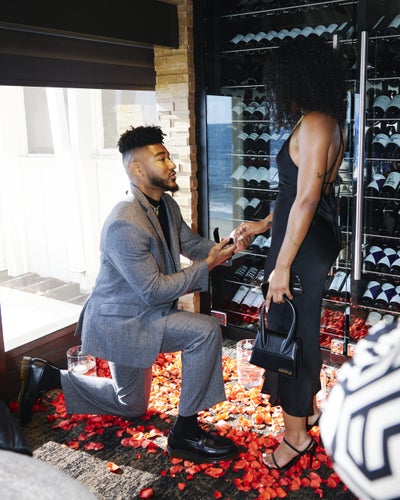 “Obviously, moving in together was something we were thinking about for a while. Actually having done it, and obviously it wasn’t perfect when we first moved in, but getting through those hurdles, understanding what a life under the same roof could look like for the rest of our lives, really helped us figure some stuff out,” he says. “I had known for a while that Cheryl would be the person I planned to spend the rest of my life with. Moving in with her really solidified that for me. I’m thankful you guys got to see that process and we’re here now.”

Together since high school, they’ve navigated growing up together and now, being in the public eye together. It hasn’t been free of its bumps, but they’ve made it work by openly communicating as often as possible and being open to change.

“We’ve grown together throughout these years and that’s what’s important. We’ve seen each other change,” he says. “That’s comfortable for us. We understand that we’re going to change because we’ve changed from kids in front of each other’s eyes.”

And watching each other on the show has helped them to be even more solid.

And while we see them both in a great place personally and professionally, where things stand with his friendships still remains to be seen. In the first episode of the second season, he bumped heads with new friend of the show Keilan Horton, and we’ll find out this season if he finally reconciles with co-star and friend from high school, Tylynn Burns. If you’ll recall, at the end of the first season, he and Burns fell out because she felt that he didn’t look out for her boyfriend after an argument the beau, Jaylenn Hart, had with former star Jordan Bentley on Smith’s podcast. The rift that was created in their relationship was a real one and the Internet took sides.

“It puts you in uncomfortable positions to really have these conversations with friends. Someone asked me, ‘How real are these arguments?’ We’re doing it with a camera in front of our face, but these are real conversations we’re having and real disputes as we’re trying to figure these things out as friends,” he says.

But for the record, Smith doesn’t regret how things went down.

“I don’t have any regrets, no. I like to think as someone who was hosting a podcast for a decent amount of time, not just me but everyone in attendance that day tried to step in and deescalate that moment and it got to a point where it was like, alright, these are two men going at each other for very specific reasons. There’s only so much I can do without inserting myself and raising my voice in a way that didn’t really need me in that situation at that time,” he says.

With that being said, he believes in reconciliation as a path to growth. “It was meant for us to have that moment and for our friendship to be challenged in that way,” he declares. “Hopefully we’ll be stronger for it in the long run.”

While navigating their friendship and the fan commentary concerning it was admittedly “a lot” for Smith, again, he has no regrets, including about opening his life up to people as part of the show. 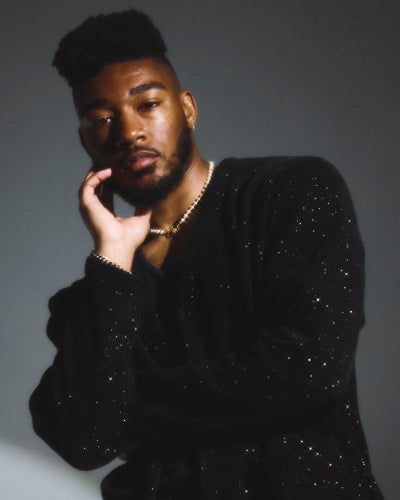 “Pardon my French, but I’m an attention whore. I love having the camera in my face to document my endeavors. Not just for the TV of it, but this is an amazing opportunity for my fiancée and my friends. I’d be remiss if I didn’t say I was enjoying doing this and want to continue to do it for as long as I possibly can,” he says.

“I work in the entertainment industry so I understand the opportunity we have here and what it could build upon for our own personal careers and businesses,” he adds. “I don’t take that lightly.”

It’s been very beneficial for the couple. For Des Vignes, her line, called Des Vignes, has received a lot of attention thanks to the series. And for Smith, he’s already getting partnerships with popular brands, has had the chance to model and looks forward to doing more TV. He’s open to scripted opportunities, and plans to pitch projects to tell the stories of people who look like him and come from where he does. But the main focus moving forward is to make Cheryl Des Vignes, Mrs. Cheryl Des Vignes-Smith. Fingers crossed we’ll see their wedding on the show.

“We gotta get some more seasons of Sweet Life to make that decision,” Smith says. “But I love how invested people have become in our relationship and I would love for that to be something for us to be able to have people see. Again, attention whore. It has to be seen.”

Episodes eight through 10 of Sweet Life: Los Angeles are now available on HBO Max. Catch up on all the episodes through the streaming platform.