IAN BIRRELL: A media tycoon with a mission to promote freedom now languishes in jail, with his newspaper empire in ruins… This Orwellian repression is stamping out the last flickers of freedom in Hong Kong

When Jimmy Lai was a child, he worked as a porter carrying bags for passengers at the railway station in his home town of Canton in southern China.

They were tough times since the vast country was ravaged by famine as a result of the Communist regime’s fanatical determination to collectivise farms and reform the rural economy.

One day a traveller from Hong Kong rewarded his labours with a bar of chocolate, something the boy had not seen before. Lai was so taken by the sweet taste he asked the man where he came from and, hearing his response, declared that ‘Hong Kong must be heaven’.

Today it is closer to hell. 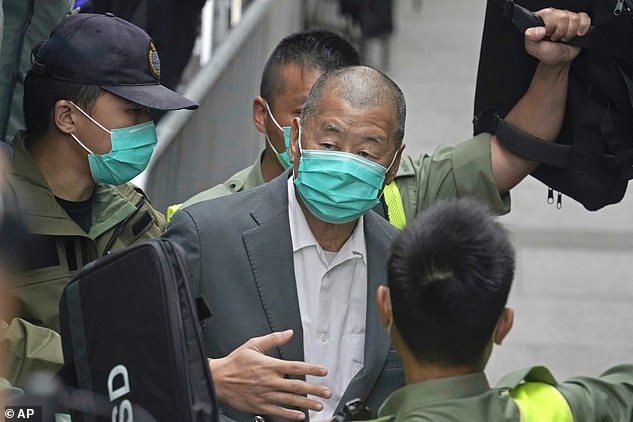 When Jimmy Lai (pictured, in police custody in February) was a child, he worked as a porter carrying bags for passengers at the railway station in his home town of Canton in southern China

And this character who moved to the former British dependency aged 12, made a fortune from selling clothes and then — inspired by the 1989 slaughter of pro-democracy protesters in Tiananmen Square — became a media tycoon with a mission to promote freedom now languishes in jail, with his 26-year-old newspaper empire in ruins.

The plight of this noble man symbolises the tragedy of that great city as another generation of pitiless Communist Party chiefs extinguish the freedoms that once made Hong Kong so extraordinary.

Apple Daily — a lively tabloid named after the forbidden fruit in the biblical Garden of Eden — has seen its offices raided twice by hundreds of police goons on trumped-up charges of colluding with foreign forces to endanger national security. After the most recent raid last week, when 500 police officers marched into the newsroom, the front page carried a defiant message: ‘We must press on.’

One senior figure bravely said the very same words as he was led away in handcuffs. 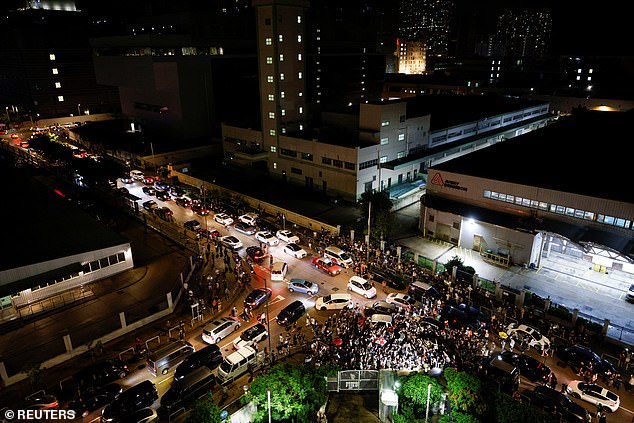 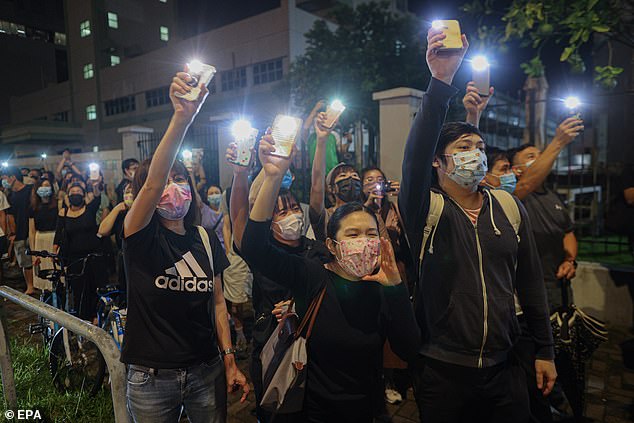 Apple Daily’s multi-million pound assets have been frozen, its computers seized and five more senior staff, including the editor, have been charged with breaching the new law passed last summer following months of turbulent protests

But the firm’s multi-million pound assets have been frozen, its computers seized and five more senior staff, including the editor, have been charged with breaching the new law passed last summer following months of turbulent protests.

‘Hong Kong is dead,’ said Lai in the days after the measure’s imposition. ‘It’s worse than the worst scenario imaginable.’

He was right. The Hong Kong that we have known in recent decades, a place of energy and vitality that bridged the gap between China and the West, has been eliminated in less than a year by the hardline dictatorship of President Xi Jinping.

Such is the extent of his Orwellian repression that even library books are being removed and school texts replaced to ensure slavish loyalty to his rule in Beijing.

This is, after all, a regime so sensitive to criticism that, after critics mocked Xi by comparing him to Winnie the Pooh, it began censoring images and mentions of A.A. Milne’s portly cartoon bear on social media.

We must hope Lai was also right when he said in that Associated Press interview last July that a dictatorship of such extremity cannot survive in today’s world.

‘We have to persist, time is on our side. We are on the right side of history,’ he said.

There is no doubt that the vast majority of Hong Kong’s 7.5 million residents support the likes of Lai, whether they grew up under British rule before 1997, were raised under the subsequent ‘One Country, Two Systems’ deal, or moved there from the mainland.

Apple Daily increased its usual 80,000 print-run to half a million to meet demand after the latest raid — yet still many newsstands sold out.

It has doubled the run to one million for its final edition.

I saw this mood for myself when I spent three weeks in Hong Kong at the height of the protests two years ago, observing courageous citizens raised in comparative freedom as they challenged the slide into Communist hands.

They were mostly young, and — for all their bravado — often scared, as they battled the fusillades of pepper spray and pellets.

Several admitted they knew they would lose their struggle — but all felt they had no choice but to fight in a bid to protect their freedoms.

At a time of such foolish complacency in the West over our democratic values, it was inspiring to see these youthful idealists prepared to risk so much to protect basic liberties that we take for granted.

And it was sickening to see at least five men brought up in Britain leading the police operations to smash these pro-democracy protests — even giving orders to fire tear gas on teenagers — as they did the dirty work for a nasty totalitarian state.

These shameful officers are the remnants of the cadre of Britons serving in the force when Hong Kong was handed back to China on the understanding that the ‘One Country, Two Systems’ deal would survive until 2047.

The treatment of Apple Daily, one of the few media outlets to back the democratic movement and not in Chinese hands, demonstrates how this agreement has been ripped up by Beijing. 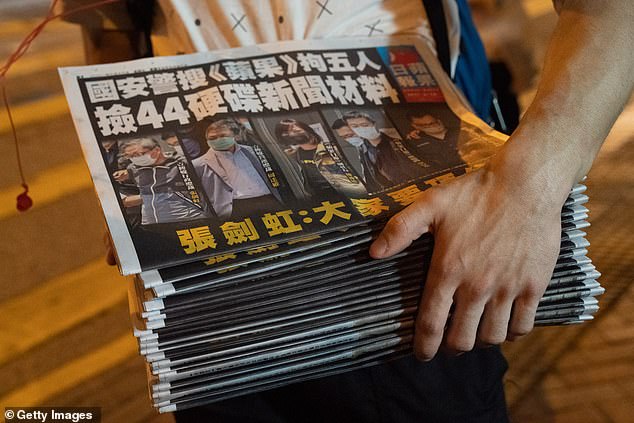 The treatment of Apple Daily, one of the few media outlets to back the democratic movement and not in Chinese hands, demonstrates how this agreement has been ripped up by Beijing

Even more alarming is Xi’s vow to take over Taiwan, the independent, democratic island off the Chinese coast that alerted the world to the Covid pandemic, and fold it into his chilling Communist embrace.

Both these positions underline how stupid Western science and media have been in trusting these Communist Party chiefs when they denied a laboratory leak could have sparked the pandemic despite the obvious cover-up of the initial events in Wuhan.

Since taking office in 2013, Xi has eliminated the slightest flickers of freedom, silenced dissent and harnessed the latest technology to create a sinister surveillance society of one-fifth of the world’s population within his borders.

He demands that companies, whether domestic or foreign-owned, follow his agenda — and from Hollywood studios through to banks such as HSBC, we have seen the distressing speed with which many Western corporate giants rush do his bidding.

This is why the silencing of Jimmy Lai and the strangling of Apple Daily is a moment of such symbolic importance, not just for Hong Kong but for the global cause of democracy and human rights amid the rise of this repellent superpower.

‘Defending freedom of speech is a dangerous job,’ the tycoon wrote from his cell two months ago, a point the regime proved later that day by sentencing him to 14 months imprisonment for joining unlawful assemblies, one of the many charges confronting him.

In finding the courage to criticise the Communist Party, his brash newspaper was a rare beast, one of vanishingly few outlets bold enough to perform the historic duty of the fourth estate to challenge power and hold leaders to account.

Its disappearance from the streets comes 20 days after another highly symbolic moment, the ban on Hong Kong holding its annual commemoration for the hundreds of students massacred in Tiananmen Square three decades ago. 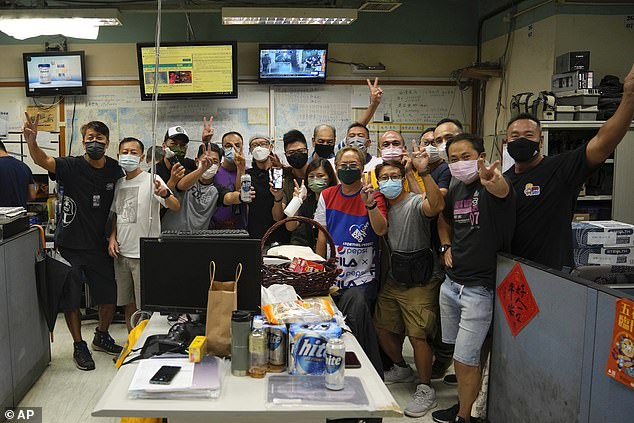 Its disappearance from the streets comes 20 days after another highly symbolic moment, the ban on Hong Kong holding its annual commemoration for the hundreds of students massacred in Tiananmen Square three decades ago

The activist and long-time vigil organiser Lee Cheuk-yan sent a moving message from prison that he would be using cigarettes to replace the usual candles to mourn for the soul of the June 4 movement.

Despite courageous gestures such as this, these are dark days for his native city.

When Apple Daily launched, it declared that it belonged to Hong Kong and with the support of its readers ‘no matter how strong the pressure becomes, we will be able to stand tall’.

Yet it has fallen, like those protesters seeking freedom in Tiananmen Square that inspired its birth.

We can only cling to the hope that their cause — and Jimmy Lai’s dream of democracy — has not been crushed for ever in China and Hong Kong.