Home » Lifestyle » I tried 3 signature Irish dishes for the first time, and it was one of the most comforting meals I've ever had

When I visited Ireland for the first time, I was a 20-year-old student studying abroad and was more focused on Guinness pints than Irish cuisine. I have a distinct memory of eating a disappointing burrito, but can't recall ever eating a single potato.

Thankfully, these last eight years have brought me far more wisdom, along with a love of trying food from around the world. So, in the spirit of St. Patrick's Day, I decided to finally sample some traditional Irish dishes.

Flying anywhere right now isn't exactly an option, so instead, I headed to Molly's Pub and Restaurant Shebeen, which calls itself "the most authentic Irish bar in New York City."

I tried three signature Irish dishes — Shepherd's pie, corned beef and cabbage, and Irish lamb stew — and washed it all down with some Irish beer. I found it to be one of the most comforting meals I've ever had.

The moment I spotted Molly's across the street, I knew I had picked the perfect place for my introduction to Irish cuisine. 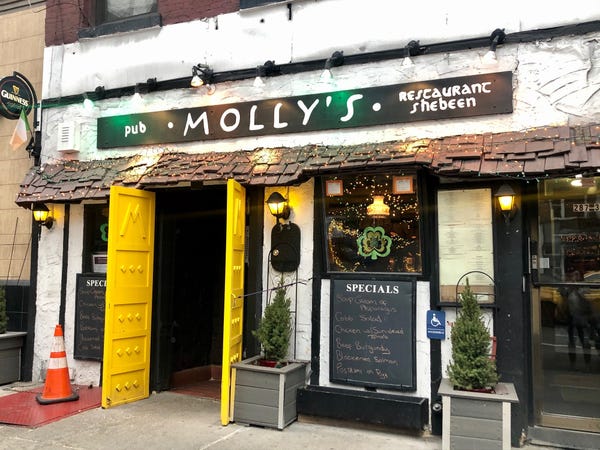 Molly's has been a bar in some shape or form since 1895 (except during Prohibition, when it switched to a grocery store).

An Irish family bought the bar in 1964 and named it Molly Malone's, after a popular Irish folk song. In 1991, it was renamed Molly's Shebeen (an Irish word for illegal drinking establishment).

Molly's was listed as one of the 10 best Irish bars in New York City by The Irish Times — a daily newspaper in Ireland — so I trusted that the pub was authentic as it claimed.

Everything about Molly's felt cozy from the moment I walked through the door. 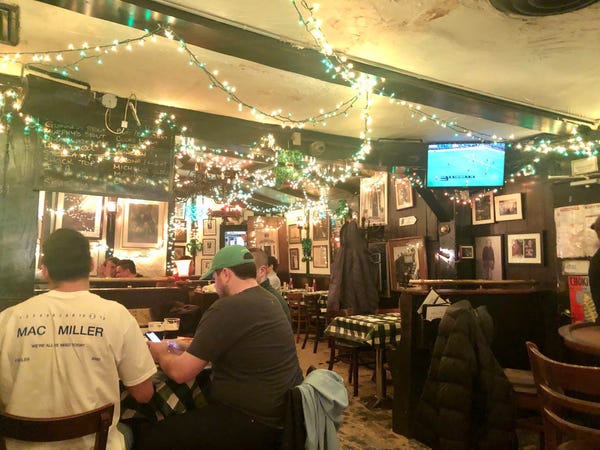 Green and gold lights sparkle from the ceiling, photos of the Guinness Brewery in Dublin cover the wall, and there's footy on the telly (soccer on TV), of course. I have always loved how cozy the pubs feel in Ireland and England, and Molly's replicates their essence with ease.

Also along for the ride was my best friend Kelly, who is half-Irish, and her boyfriend Zach. As we sat down at our table, Kelly began telling us about the corned beef and cabbage she used to eat with her family every St. Patrick's Day. The pub, with its dim lights and soft music, felt warm and comforting — something we all needed during such a bad news week.

Our first order of business was to get some Irish beer. 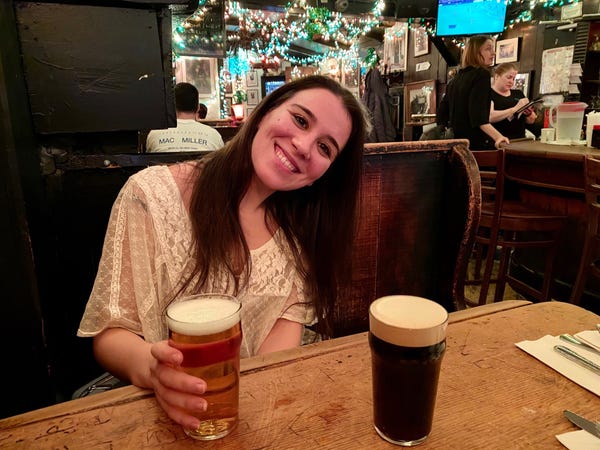 When I was in Ireland with my study abroad friends, we vowed to only drink Guinness in the Emerald Isle. And while I definitely don't mind a pint of the Black Stuff, as it has lovingly been dubbed, this was a day about expanding my horizons.

Ireland has plenty of great beers that go beyond Guinness. Kelly and I ordered pints of Harp Lager, which hails from Dundalk, Ireland, while Zach got a pint of Murphy's Irish Stout.

We took a look at the "Shebeen Favorites" on the menu and decided to order Molly's traditional Shepherd's pie, Irish lamb stew, and corned beef and cabbage. 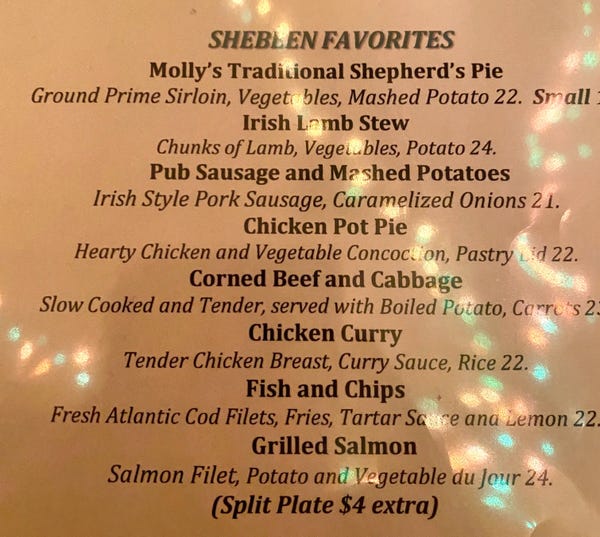 Before I decided on Molly's, I asked my friend Alice — who was born and raised in Ireland — for advice on what I should try for this article. She told me about a number of exciting dishes, from Boxty (a traditional Irish potato pancake) to Colcannon (a mixture of potato, cabbage, and butter), plus authentic soda bread. But, they all proved to be quite difficult to find in Manhattan!

So after some research, I settled on these three dishes, which were traditional but also available at a number of Irish pubs and restaurants.

The dishes came out all at once and, as you can see, I was very excited to begin my authentic Irish feast. 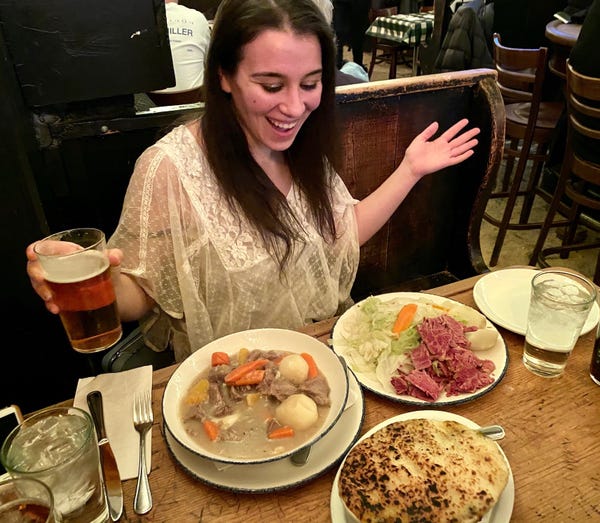 I hadn't even tasted anything yet, but I knew this was going to be so much better than that burrito.

First up was the corned beef and cabbage ($23), which comes with slow-boiled potatoes and carrots. 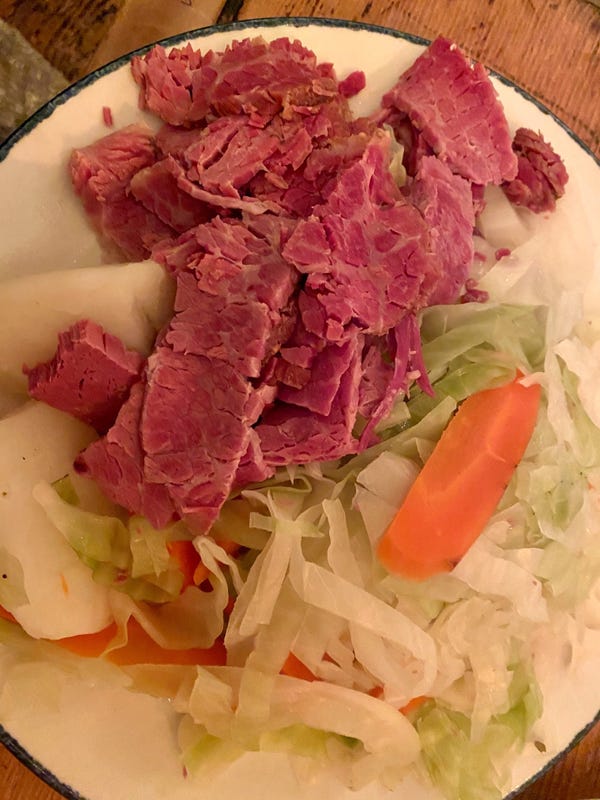 Kelly is among many Irish-Americans who have celebrated St. Patrick's Day with a heaping plate of corned beef and cabbage.

It was actually Irish immigrants in the 1800s that turned St. Patrick's Day into the celebration that it is today. The holiday — which always falls on March 17 — used to be focused on religion and family. Pubs in Ireland were even closed on St. Patrick's' Day until the 1970s.

But Irish immigrants in the US wanted to commemorate their native land on the special day. And they did so with corned beef, which they bought from the nearby Jewish butchers, according to The Smithsonian. In Ireland, they would typically eat boiled bacon, but it was too expensive in America.

They paired the beef with potatoes — an Irish favorite — and cabbage, which was the most affordable vegetable at the time. The meal became so popular in American culture that Abraham Lincoln even put it on the menu for his Inaugural Luncheon in 1861.

This was the first time I'd ever had corned beef, and I loved how it paired with the cabbage. 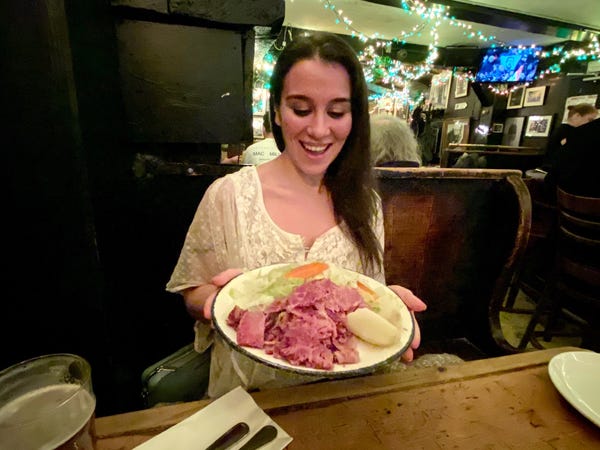 Kelly, my resident expert, suggested that I try the beef with some of the Colman's mustard at our table. The mustard packs a spicy punch in the same sinus-opening way that Wasabi does, yet doesn't overpower the salty taste of the corned beef.

The beef, by the way, is wonderfully tender. I was surprised at how soft it tasted, and the cabbage gave the whole dish a nice depth and some needed crunch.

Zach, who was also trying corned beef for the first time, said it "definitely lived up to everything that I thought it would be."

And it was Kelly's favorite dish of the night.

"I thought it had the most dynamic mix of flavors between the cabbage, the beef, and the mustard," she said. "The savory flavors in the other dishes blended together and it was delicious, but there was something special about this."

Next up was the Irish lamb stew ($24), which features chunks of lamb, vegetables, and potatoes. 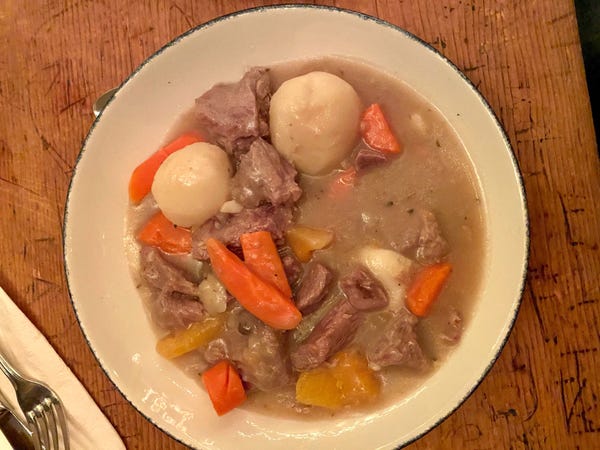 Stews, which only required a hanging pot and a few ingredients, became popular in Ireland during a period of mass poverty in the early 19th century. When it first originated, Irish stew was usually made with mutton — which was more available — and often only featured onions and potatoes. Families that were more well-off also added vegetables like carrots and turnips.

Molly's Irish stew was so warm and comforting. The lamb was nice and soft, and the gravy was mild but flavorful. The potatoes had a really velvety texture, and the carrots added a nice crunch to a simple but soothing dish. Kelly said the stew tasted exactly like how her dad used to make it when she was a kid. She told us how he would use leftovers from the stew to make dumplings.

"The lamb stew just felt like home," Zach said, telling me it was his favorite dish of the trio. 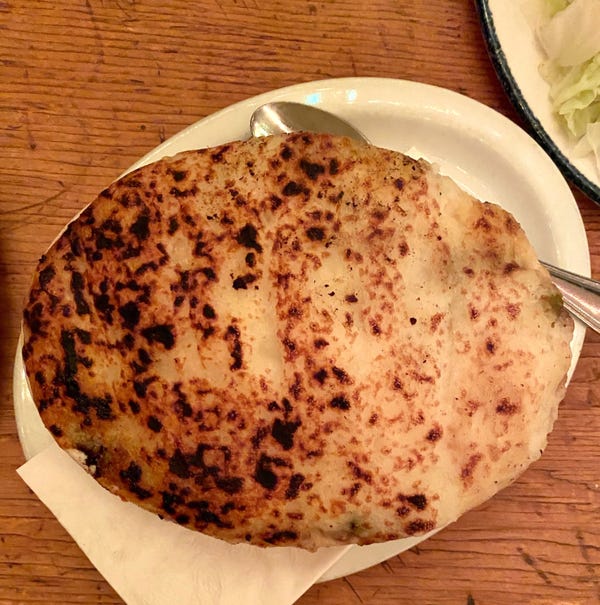 Shepherd's pie traditionally features a mashed potato crust, ground meat cooked in gravy, plus carrots, onions, and celery. It is believed that the dish was inspired by cottage pie, which became popular in the 18th century.

People in both Britain and Ireland used cottage pie as a way to repurpose their leftovers from a weekend roast, according to Chowhound. The term for Shepherd's pie, which features lamb instead of beef, came about in the middle of the 19th century.

The Shepherd's pie was definitely my favorite dish of the night. 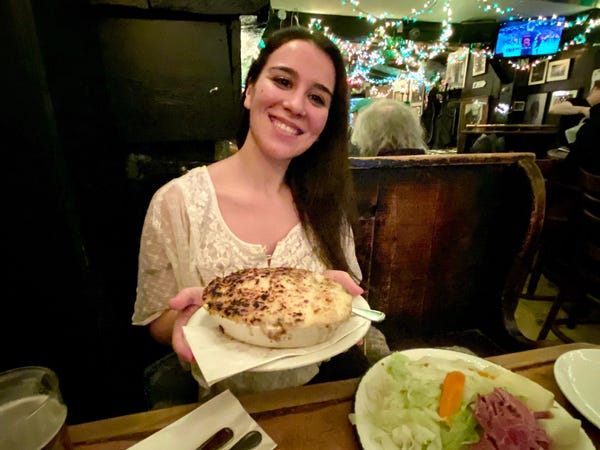 It was so meaty and comforting, and the potatoes were super fluffy. The mixture of a crust of mashed potatoes and meat filling reminded me of my dad's pastitsio, a Greek dish that features ground meat, pasta, and Béchamel sauce. While the components may be different, both dishes have that same effect that just seems to warm you from your head to your toes.

Kelly, who had Shepherd's pie plenty of times as a kid, told me she has always loved the hearty dish.

"It felt like I was eating a treat for dinner, because it was like, 'Oooh, mashed potatoes and meat, what could be better?"' she said.

Zach told me that the dish made him "want to cozy up next to a fireplace in a wilderness lodge."

All three of the dishes were very different, but they all worked exceptionally well together. 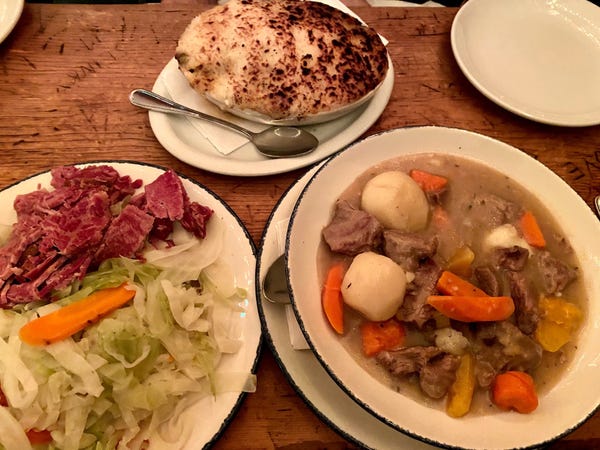 You know when you're at a potluck and you get so excited that you just kind of dump everything on the plate and hope it all works together? It easily would with these three dishes.

I found myself spooning some of the stew on the Shepherd's pie to make it even moister, and at times I was throwing cabbage in the mix for some crunch. Kelly was also taking potatoes from the corned beef dish and pouring more stew on them.

Overall, I loved finally getting to try some authentic Irish dishes. 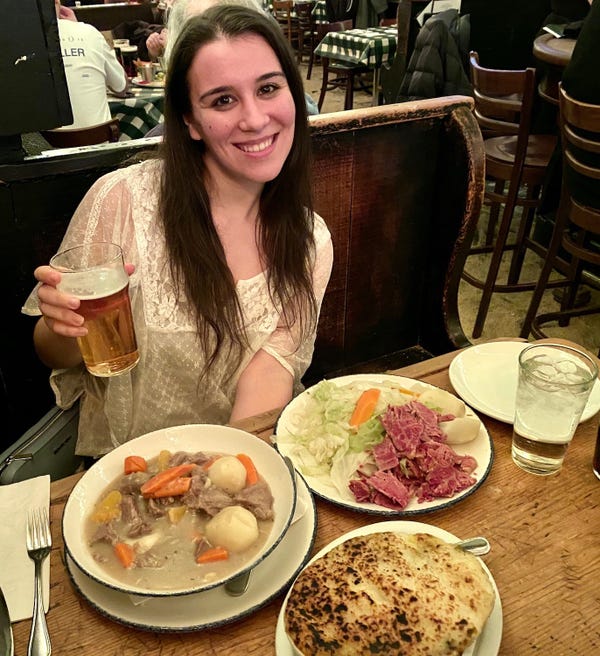 I went to Molly's just a few days before the coronavirus news amped up. We were all feeling nervous and weird, and the hearty and comforting meal was much needed. Plus, it was extra special getting to hear my best friend share her memories about some of the dishes. My parents live across the country and I can't fly home for the foreseeable future, so getting to hear about family memories and eating dishes that reminded me of home — even just a little — was really soothing.

"Everything felt like a nice warm hug," I told Kelly.

"That's what the Irish do to you," she replied.