Home » Lifestyle » How supermarkets are controlling your diet (and your weight)

If you spent some time considering the causes of the obesity epidemic, chances are you would be quick to blame poor food choices, our sedentary lifestyles or the companies making soft drinks and snacks. Far less likely is it that you would name your local supermarket as playing a key role in the crisis.

But with two-thirds of food consumed in Australia purchased at the supermarket, our local outlets play a much bigger role in what we eat than we may realise. 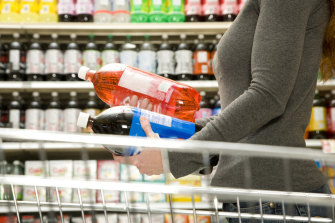 It is not only the store lay out and price incentives that supermarket’s can influence but also individual consumers buying behaviours.Credit:iStock

There are several ways supermarkets can push up the the consumption of energy-dense, non-nutritious foods including soft drinks, confectionery, processed snacks and sugary breakfast cereals.

And there is strong data to show these tactical placements and promotions are often for unhealthy products.

A study conducted by a team of Deakin University researchers, and published in the American Journal of Public Health, found that on any one week in Australia’s biggest supermarkets, almost 30 per cent of discretionary or extra ‘junk’ foods were on price promotion. Meanwhile, just 15 per cent of core or ‘healthy’ foods were on special.

They also found that the specials were almost twice as big for junk food compared to healthier options.

Lead study author Associate Professor Adrian Cameron, an expert on consumer behaviour in supermarkets, says that supermarkets are key players in our fight against obesity.

"With two-thirds of our food purchased at supermarkets, and with a small number of major supermarket players influencing what consumers routinely buy, we must work with retailers to help change consumer behaviours," Professor Cameron says.

"One area that we know has a big impact on behaviour is the placement of products at end-of-aisle displays, and usually on special. Unfortunately the involvement of both retailers and manufacturers make this a challenging thing to change."

Professor Cameron does acknowledge that supermarkets have made some positive changes in recent years, but stresses there is more work to be done.

"The increase in the size of fresh food sections of supermarkets is a great initiative. And while supermarkets do play a key role, we have to also remember that it is food manufacturers who pay for shelf placement and price promotions, so for these changes to be successful, we also need the cooperation of the large food manufacturers."

As an expert in obesity prevention, lawyer and academic Dr Alexandra Jones from The George Institute knows all too well of the power our major supermarkets have in convincing shoppers to buy more unhealthy food.

"I am well aware of the power of contracts to drive shelf placement which directly influences what we purchase, and the way in which supermarkets are designed to keep us in there for longer, and with a range of nudges to encourage us to buy foods we do not need," Dr Jones says.

"Of course this means that supermarkets can also help us to make good choices and in particular our supermarkets are in the unique position of also being able to encourage us to buy healthier, fresh foods more frequently.

"If I could make positive health changes to supermarkets tomorrow it would be to stop the sale of sugary drinks completely, but to also place fresh fruit and vegetables rather than confectionery and snack food at the end of each aisle. There are simple changes but ones that would have a significant impact on public health in the long term."

Studies are currently under way to determine if supermarkets' intricate knowledge of their consumers through the use of loyalty schemes could be used to directly encourage people to purchase healthier items.

In such studies customers receive targeted marketing materials to encourage them to buy healthier products. Whether this works, and reduces the purchasing of junk food, remains to be seen.

So while we watch and wait for healthful new initiatives to be implemented in our supermarkets, there are tricks you can employ to help you take back control.

Online shopping, for example, is one method. Free of temptation, shoppers may not only spend less cash, but also save on calories, too.

Avoiding the shops when you are hungry is another simple trick, as is always shopping with a list so that you are not mindlessly wandering without a clear guide for exactly what you need to buy.

Finally, avoiding the most tempting aisles altogether can minimise impulse purchases. What you do not see, you will not be tempted to buy.

Susie Burrell is a dietitian and nutritionist.