Emily Maitlis’ Newsnight interview with Prince Andrew was one of the biggest talking points of last year, and she’s just received the highest recognition for it.

In one of the most infamous interviews in modern times, Newsnight host Emily Maitlis pressed Prince Andrew on his involvement with convicted sex offender Jeffrey Epstein at the end of last year.

The Duke, who spoke to Maitlis in Buckingham Palace, blustered his way through what’s been called a “car crash” interview. But Maitlis, who was in the driving seat, was very much in control when it came to the unexpected circumstances and no doubt difficult job of asking a member of the royal family about their sexual activity.

Perhaps the most memorable moment of Maitlis in the interview was when she reacted to Andrew describing Epstein’s behaviour as being “unbecoming”.

“Do I regret the fact that he has quite obviously conducted himself in a manner unbecoming? Yes,” he said.

At this response, the BBC presenter interrupted with a startled look on her face, saying: “Unbecoming? He was a sex offender.”

“Yes, I’m sorry, I’m being polite, I mean in the sense that he was a sex offender,” he mumbled back.

Now, Maitlis has been named network presenter of the year at the Royal Television Society Awards for the interview. After receiving the award, Maitlis said: “It wasn’t actually about the royal. It was an interview for women watching around the world, who were waiting to see if we asked the right questions at the right moment to things that we needed answering.” 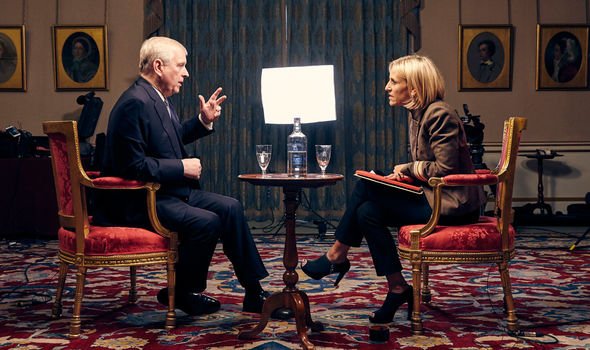 It’s this kind of no-nonsense interviewing that has made Maitlis one of the internet’s favourite interviewers today. Now, more than ever, it’s important that our political journalists hold our leaders to account.

Working as a reporter at the BBC since 2005, Maitlis started presenting Newsnight the following year – becoming the only one on the show not to have attended private school. She was recently made the lead presenter, and still found time to publish her book Airhead: The Imperfect Art of Making News.

Maitlis doesn’t take any nonsense from any of her interviewees that try and wrangle their way out of her direct, pressing questions. The results of this have provided some viral nuggets of Maitlis gold. Yes, we’re completely biased: we love the Maitlis. To celebrate this, here are five more moments when she absolutely #slayed the system.

1. Telling the Chancellor of the Exchequer exactly how bad things are out there

After putting the shocking results of the UN report on poverty in the UK to Chancellor of the Exchequer Phillip Hammond on Monday (3 June), Hammond said he “didn’t accept the results” and continued: “Look around you that is not what we see in this country”.

“14 million [people live in poverty] according to the UN rapporteur,” reiterated Maitlis. “I beg to differ, we’re in Downing Street, so if I look around me I’m not going to see a lot of poverty. But if I went to other parts of the country, I would see that poverty. We do see that poverty.”

Earlier in 2019, it was announced that Newsnight – arguably the most high-profile political TV programme in the UK – would be helmed by an all-female presenting team for the very first time (Maitlis, Emma Barnett and Kirsty Wark). Speaking about her role as the lead presenter, Maitlis said she was “delighted to be moving into this role at a time when Newsnight feels so pivotal to our understanding of this extraordinary moment in British history”. This was such an important move in TV and politics because it showed that the BBC is taking its commitment to gender diversity and closing its gender pay gap seriously.

3. Winner of the “most interruptions during an interview” award

Recent research by The Sunday Times showed that, out of the BBC’s “top interrogators”, Maitlis and fellow reporter Mishal Husain lead the way when it comes to interrupting guests during political grillings. Speaking about her technique in an interview with the Observer, Maitliss said: “If you interrupt somebody too early, if you miss it and don’t interrupt at all – that’s the difference between a good interview and a bad interview. It’s about the absolute moment.”

4. THAT viral side eye moment

It was an eye roll that spoke for the whole nation as we despaired over the handling of Brexit once more. Shortly after a majority of MPs rejected May’s revised withdrawal agreement in March, Maitlis interviewed three politicians to appear on BBC Two’s Newsnight. Her now infamous side-eye was prompted by a conversation with Gardiner, the shadow international trade secretary. When she asked what “Brexit vision” would be in Labour’s manifesto if a general election was called next week, Gardiner replied that the party would “negotiate the deal that we have set out”. This, he had previously noted, would “honour the referendum result” while protecting “the jobs of people out there”.

“That’s going to be on the leaflet?” Maitlis asked.

“We will decide what our manifesto position is as we normally do,” Gardiner replied.

Cue: the most meme-able moment in Brexit reporting.

5. Spending time in prison… more than once

As British politics continues to plummet and the true story of Prince Andrew continues to unfold, we’re sure there are plenty more brilliant moments from Maitlis to come.