A dating expert has claimed the #MeToo movement has made men across the world scared to approach women on the street for fear they’ll come across as ‘creepy’ or be accused of harassment.

Kezia Noble, 38, from Chelsea, south west London, an author who appeared as a coach on Celebs Go Dating in 2018, said many blokes have adopted dull ‘nice guy’ filters that actually repel women rather than attract them.

The divorced mother-of-one, whose YouTube videos offering dating advice have received 75 million views, said while the empowering movement has served a ‘very good purpose’, she is concerned about its ‘trickle effect’ which has made men feel they can’t talk to or interact with women in real life.

Keziadded that most women she speaks to say they are fed up with ‘woke’ men being ‘too nice and bumbling’ and want a guy to take the bull by the horns and ask them out. 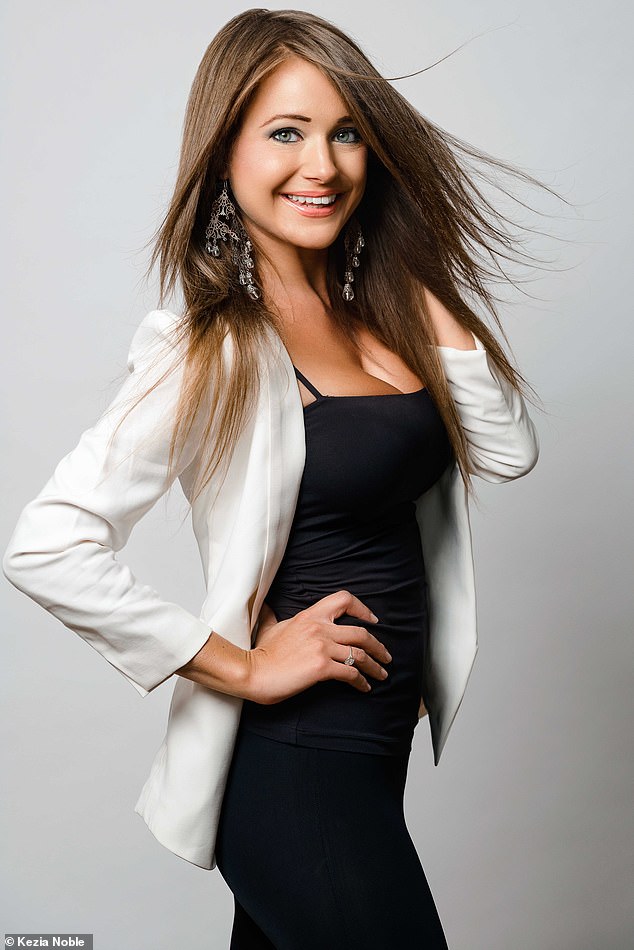 Kezia Noble, 38, from Chelsea, south west London, has claimed the #MeToo movement has made men across the world scared to approach women on the street for fear they’ll come across as ‘creepy’ or be accused of harassment

She told FEMAIL: ‘The #MeToo movement served a very good purpose; Harvey Weinstein has just been convicted and quite rightly so – there are men in power who abuse it and this is something that I think most people would say should be clamped down on.

‘My problem is the trickle effect #MeToo has had, where it’s affecting normal guys approaching women in a bar or in the street.

‘It’s being perpetuated like, “You’ve got to be super, super respectful to women, you can’t invade her space, you can’t talk to her, you can’t approach her,” and then it’s kind of like, well what’s left?’

Kezia went on to say that it’s caused men to ‘water down’ their masculine treats and take on a ‘nice guy’ persona. 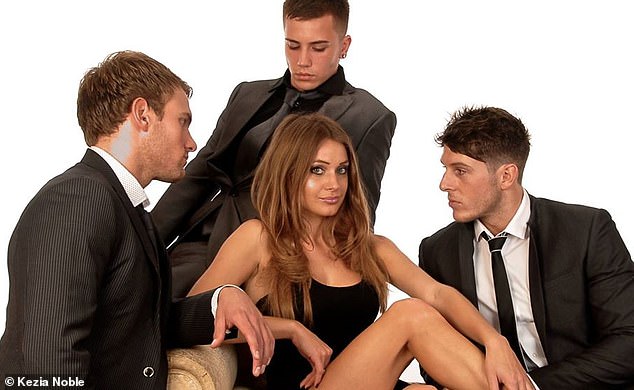 Kezia, who has been working as a dating expert since 2006 and has run her own company since 2010, added that most women she speaks to say they are fed up with ‘woke’ men being ‘too nice and bumbling’ and want a guy to take the bull by the horns and ask them out

‘I know when I talk to guys now and they approach me, I think, “Oh God this is like some weird filter you’ve got on because you’re scared of #MeToo or something”,’ she said.

‘It’s a bit dull. It’s watering the guy’s traits down – his character, his boldness – to make him this nice, inoffensive, bland, forgettable “nice guy”.’

She argued that men can be ‘alpha males’ without being a ‘b*****d’ to women, adding: ‘Treat ’em mean to keep them keen doesn’t mean be abusive, it just means don’t be so readily available.

‘Show that you have other options, things like that – it’s just game strategy which women play on men and men play on women. I just feel like that’s getting a bit lost.’

Kezia operates in the UK and also has a team in the US, and runs weekend workshops costing £487 and seven-day mastery programmes for £4,500, as well as offering online training programs and e-books to help men meet women. 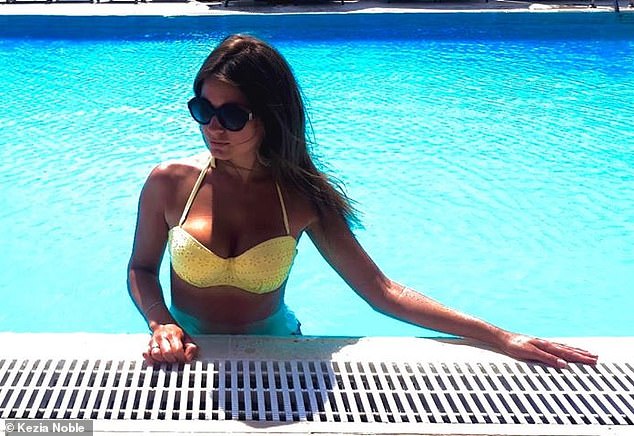 The divorced mother-of-one, whose YouTube videos offering dating advice have received 75 million views, said while the empowering movement has served a ‘very good purpose’, she is concerned about its ‘trickle effect’ which has made men feel they can’t talk to or interact with women in real life

She claims the #MeToo ‘fear’ has pushed men towards dating apps, which she argues don’t work because people are judged purely on how they look in a picture – and often those photos are heavily edited and filtered.

How to be the man that women REALLY want

Kezia shares her tops tips for getting a date:

LOOK UP FROM YOUR PHONE: Parks, coffee shops, art galleries, shopping malls and tourist spots are great places to meet women, so keep looking up, away from your phone – the more you look up, the more opportunities you’ll see.

BE INTERESTING: Show women you have something to offer. That’s what a lot of people forget. What are you bringing to the table? Are you asking her an interesting question? Are you charismatic, or are you just going there to be boring, asking her ‘Can I buy you a drink, can I take you out?’ That’s not having an interaction. Remember that an interaction is essentially an exchange of data. You can’t just go up to a woman and start questioning her – that adds too much pressure.

ALWAYS GO FOR THE NUMBER: A lot of guys do well, and then they’re like, ‘I don’t want to ask for the number and screw up’, I’d rather not face possible rejection’. Or, they ask for a number at the worst possible moment, when the conversation has fizzled out. Get to the highest point in the conversation and then break away – always leave your audience wanting more.

DON’T USE GENERIC COMPLIMENTS:  Don’t be afraid to compliment, but remember, women don’t want to feel idolised, they want to feel special.  Special means that you’re going to give her a compliment which is bespoke and tailor-made for her – not something she might suspect you’ll use on someone else five minutes later. You can only really do that if you’re listening to someone and you’re really looking at them and being genuine. You could qualify or validate them with something like, ‘You know what I like about you, is the fact that you really speak your mind’, rather than a throwaway compliment like ‘You have really beautiful eyes’.

GET A DATE BOOKED IN: Nobody wants to date someone with an abundance of time of their hands; it’s unattractive and makes people more likely to flake on you. Don’t ask her when she’s free, tell her the dates you’re free to pick from and stick to them.

DITCH ‘FINDING’ AND ‘LOOKING’ FROM YOUR VOCAB: If a woman wants to know your situation, don’t say you’re ‘looking for a girlfriend’ as it comes across as needy. Tell them you can see yourself getting married and settling down one day, but it has to be with the right person who’s got similar values to you.

ONLY OFFER TO PAY IF YOU WANT TO: A lot of men love spoiling the woman, so I say to them, you do you, and be unapologetic for it – that is attractive. I think it’s very polite for a woman to offer to pay, personally I wouldn’t, but I might offer to pay for a round of drinks. Men have always said it’s a nice gesture when a woman offers.

She added it’s also meant many people now lack engaging conversation and flirting skills because they’re so used to communicating via text messages.

‘We’re not talking to people one-on-one in real life, so our social skills are not in good shape,’ she argued.

‘A lot of women say, “This guy was so witty in his text messages but when I saw him he was a social freak and it was really awkward”.’

This is part of the reason she urges singletons to ditch dating apps – something she has never used herself.

‘I know that with all my ex-boyfriends, if I’d seen them on a dating app I would never have never swiped right,’ she said.

‘It’s not just about looks, and this is the terrible thing – the only people that are doing really well from dating apps are good-looking people. You’re just looking for your type of person. You’re not going to look at someone and go, “Oh maybe”.

‘When you meet people in real life, you see them in the bar interacting with other people, you think, “Oh there’s something about that person. The way they move, their eye contact.”

‘I had this experience a couple of years ago – immediately I was like, “No thank you”. And then I got talking to him and I was like, “Oh gosh, wow.” I called him the thunderbolt because I was like, “Where did that come from?”‘

One of the skills Kezia teaches is ‘conversational clickbait’ – using tailored talking points that will hook people in and make them more curious and invested in the interaction.

‘I always say to my guys, work massively on conversation, because when you know that you can go and have an engaging conversation with anybody, and not be sitting there going, “Oh I hope we have something in common”, what happens is you can connect, you relax, your anxiety relaxes and you’re able to vibe,’ she said.

‘You have to market yourself very quickly. Listen and don’t come out with the same c*** everyone does.

‘If she says, “I’m from Spain”, rather than going “What part, how long have you been here for?” replace that generic with something like, “You know what I’ve never been there, tell me two things that make it an incredible place to visit”.

‘It’s minor conversation alterations that can make a huge difference. When people say “just be your confident best self”, that doesn’t translate, it’s too vague.’

Kezia, whose clients vary in age from their twenties to their fifties and hail from all walks of life, said most men she coaches say they receive better responses from women on the street or in a cafe or bar now than they did five years ago.

‘Women are saying, “This is so nice, to have a conversation with someone, someone is approaching me, rather than just having conversations on dating apps”,’ she explained.

‘I don’t hear women complaining about men approaching them… If she’s single and you’re going there and having an authentic conversation with her, I think most women are going to be quite engaged with that.’ 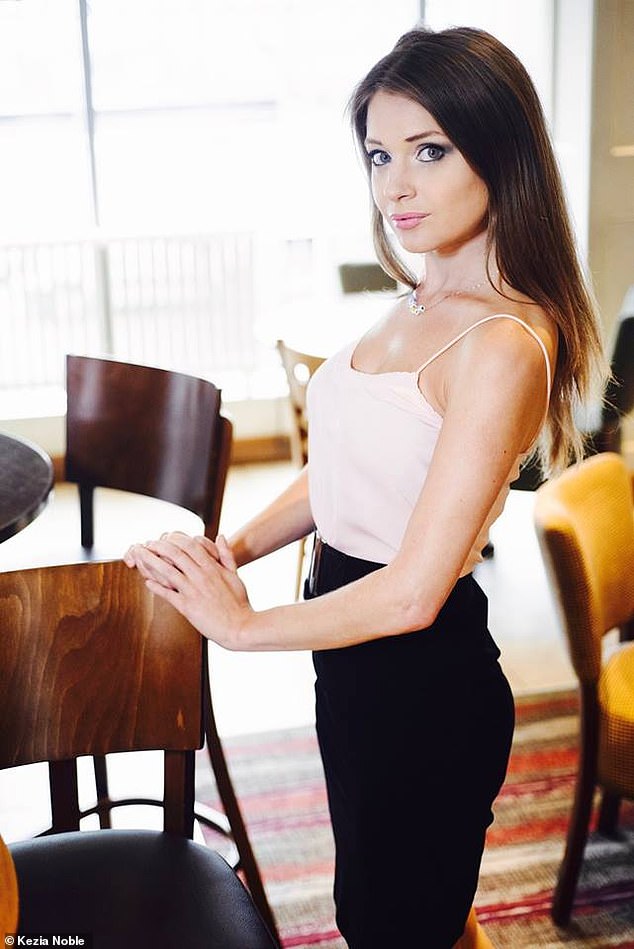 Kezia operates in the UK and also has a team in the US, and runs weekend workshops, bootcamps and mastery programmes as well as offering online training programs and e-books to help men meet women

Kezia pointed out that dating apps are not necessarily a safe place to meet men because you can’t get a good impression of someone’s ‘vibe’.

‘I know when I go to meet a guy, I trust my instincts. I know when someone’s a bit off, I can’t explain it. It’s an eye contact thing,’ she said.

‘I think it can be quite dangerous to meet someone you don’t know. It creates a very easy hook-up culture, and people get ghosted all the time.

‘If you meet someone [in real life] and you go on a date, you’re more likely to invest in it a bit more.’

For more information about Kezia’s work, visit her website: https://www.kezia-noble.com/.