CORONAVIRUS has hit global markets hard, but could plunging share prices result in a recession and job losses that have followed crises in the past?

This week saw the UK's FTSE 100 suffer an 11 per cent drop – its biggest daily share price plummet since Black Monday in 1987, and surpassing the drawn out drop of the financial crash in 2008. 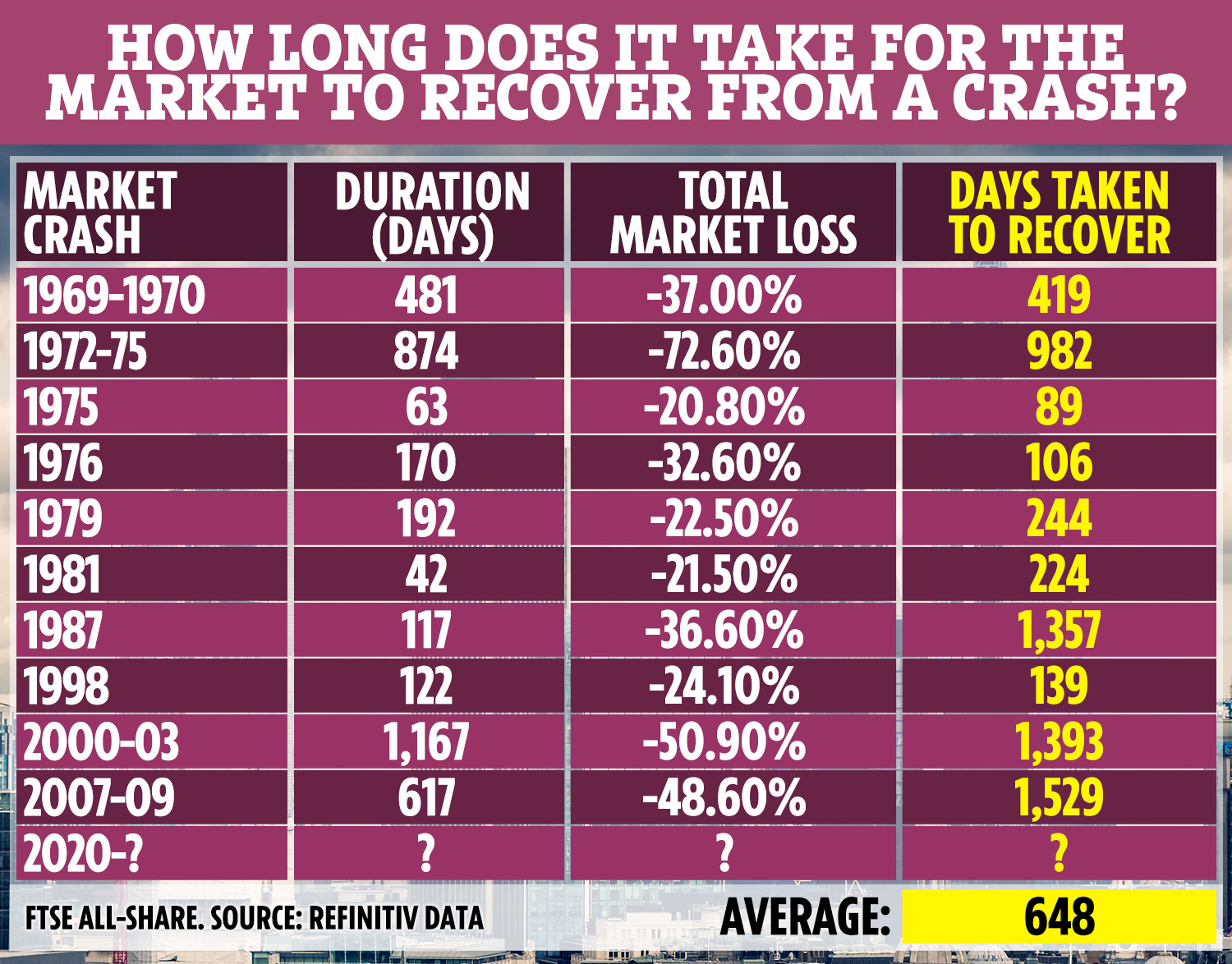 It comes as the number of new coronavirus cases in the UK has risen to more than 700, and is expected to rise into the hundreds of thousands in the coming months.

Of course, no-one knows exactly what impact the COVID-19 outbreak will have on the economy, especially given the pandemic isn't set to peak in the UK until the first few weeks of April.

But we look at how similar what's happening now is to previous market crashes of 1987 and 2008 when the financial crash began.

Back in 1978, fears of rising interest rates and a falling dollar, combined with trouble between the US and Iran in the Gulf, sparked chaos in the financial markets causing them to be temporarily closed in London.

While in 2008, US bank Lehman Bros bank folded accelerating the financial crisis that saw the collapse of a number of major lenders with a run on the banks.

How similar are the crashes?

She told The Sun: “The economic backdrop of all of these market falls was very different.

“Each of these events unfolded very differently, so it doesn’t tell us an enormous amount about what to expect next." 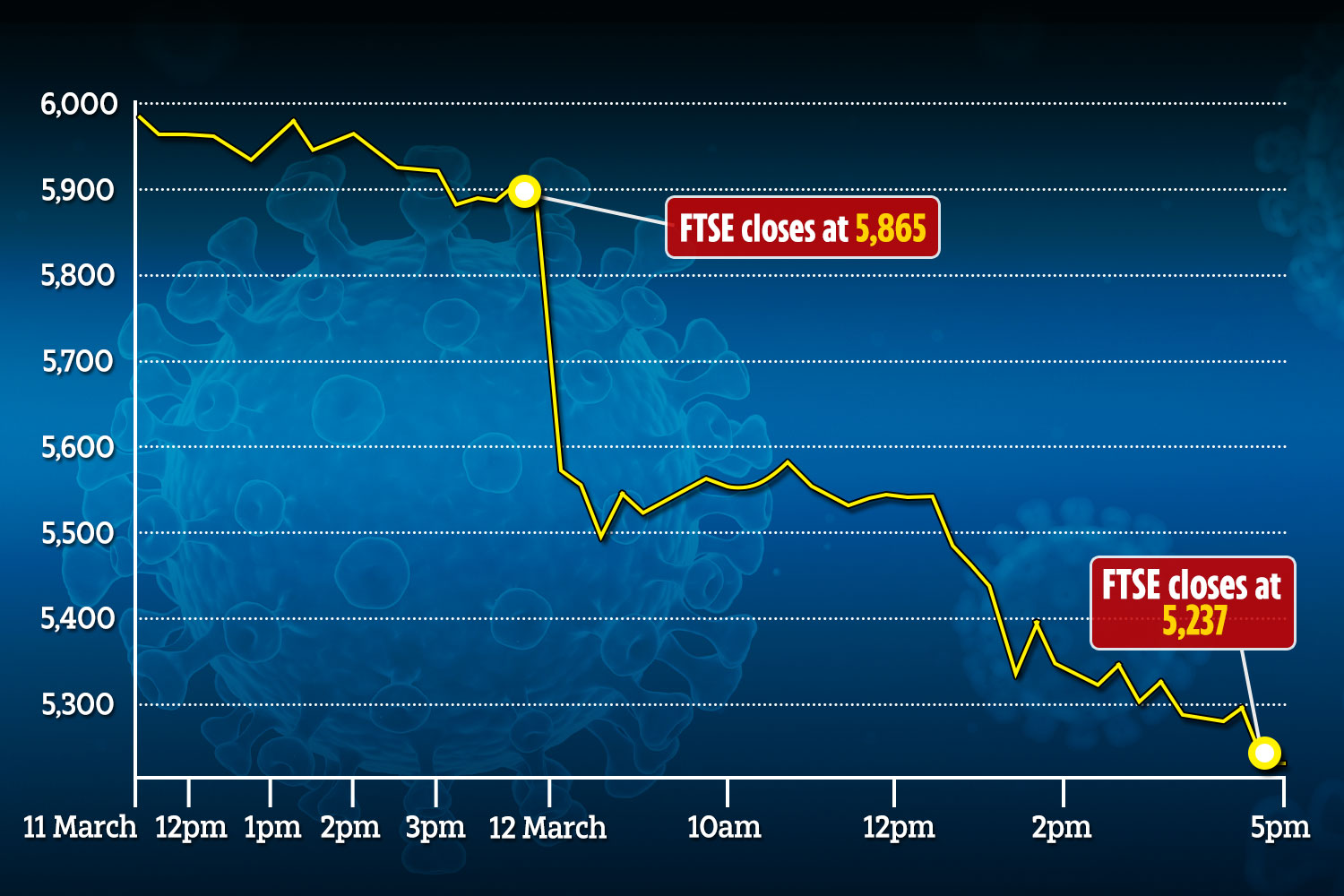 She explains markets are moving too fast for experts to predict accurately what will happen next, as investors fear the effects of school and workplace closures as nations layout their battleplans to combat the spread of the disease.

How long does it take markets to recover?

It takes an average of 648 days for the markets to recover from a crash, according to financial provider AJ Bell.

Markets have been through crashes before. But this week’s sell-off is different.

The growing panic generated by the spread of the coronavirus – which was declared a pandemic this week – has led to some panic trading activity.

The FTSE 100 had its second worst slump ever when shares fell 11 per cent on Thursday.

The previous occasion had been back in 1987 on the so-called Black Friday when the blue-chip index fell by 12.2 per cent in one day.

Back then – and even during the financial crisis in 2008 – traders could see some light at the end of the turmoil.

The fact that the FTSE had bounced back by 7.5 per cent on the lunchtime after its disastrous Thursday – and then fell back to close to its previous level by tea-time, demonstrates what kind of state the market is in. It’s confused.

Investors should remain calm and keep a weather eye on market movements, but not be panicked into making mistakes.

But despite yesterday's crash, the FTSE opened 6 per cent higher this morning.

Could it lead to a recession?

Chief economist at investment firm Schroders, Keith Wade, warns that lockdowns in countries in the European Union such as Italy and Spain, could bring the global growth forecast down to 2 per cent from 2.3 per cent.

But not every market crash signals a recession – you need two consecutive quarters of negative growth for a recession to be declared.

Mr Wade adds that the risk of a recession depends on the scale of the impact in the US, because a recession there would likely mean a global recession.

But it occurred at a time when GDP growth was 5.3 per cent, far higher than it has been for the past 30 years. 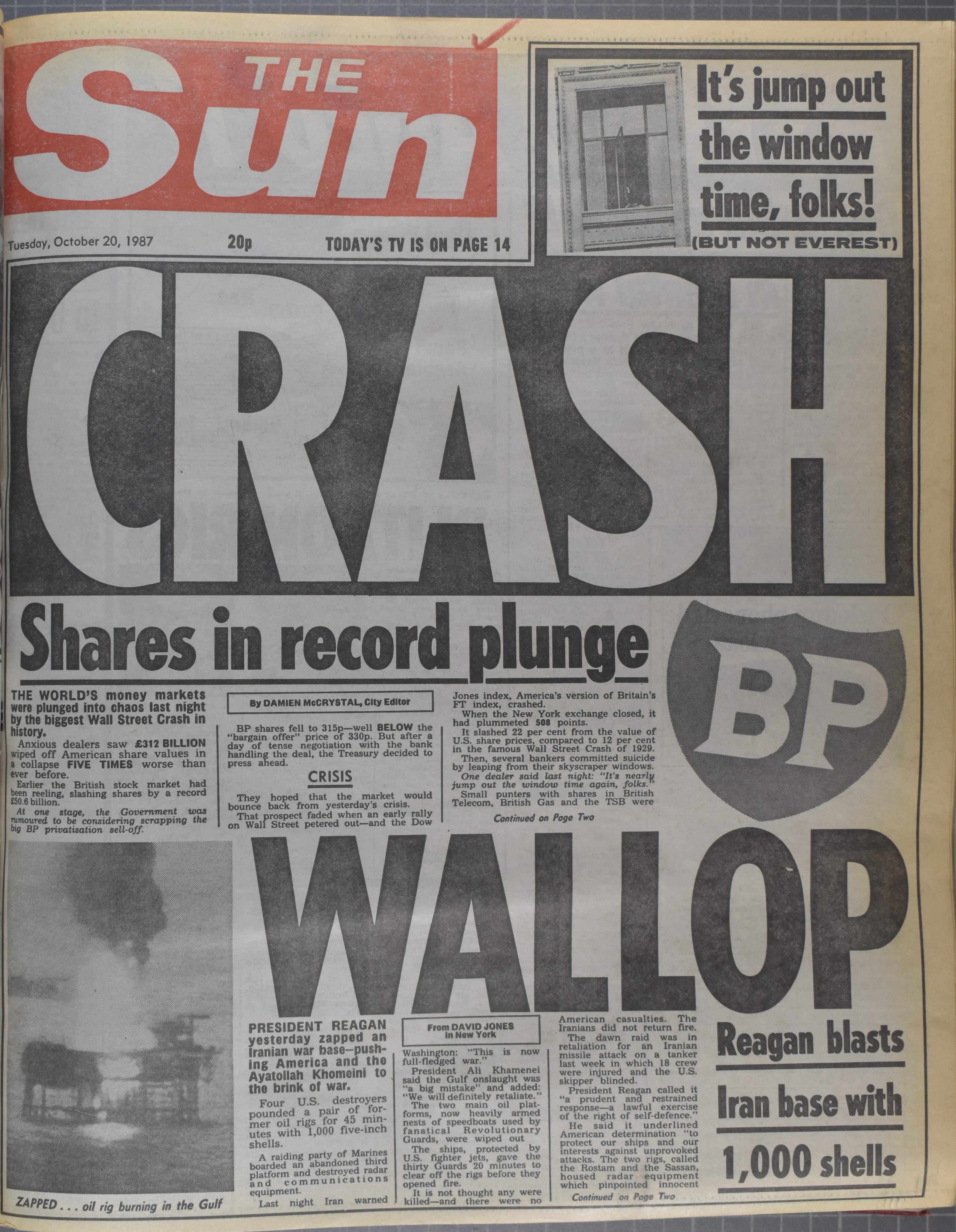 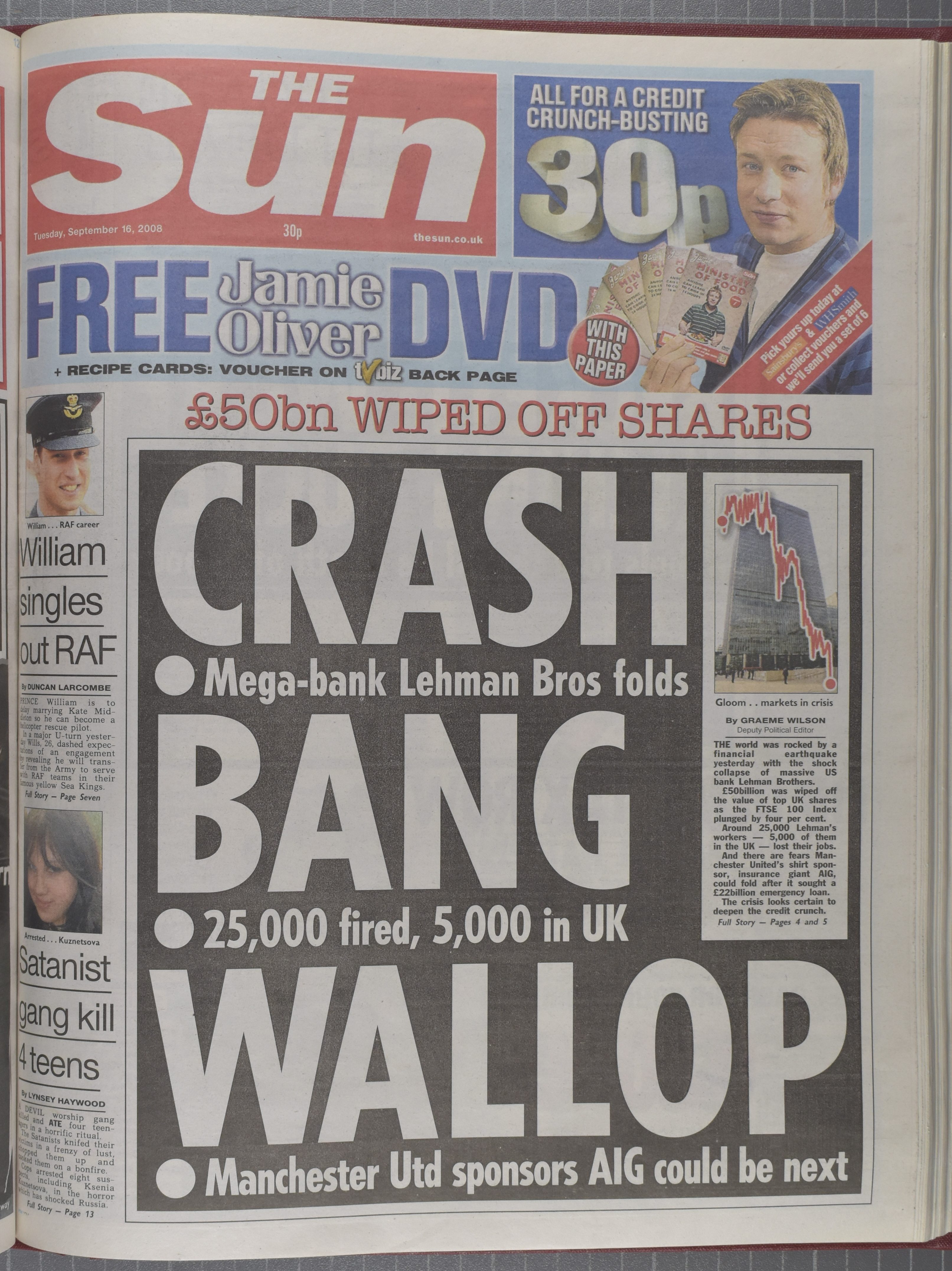 In 2008, the Bank of England dropped base rate from 4.5 per cent down to 2 per cent over two months.

Ms Coles said: “The financial crisis unsurprisingly affected both the economy and the markets – with the impact on the economy far more long-lasting and far-reaching,” she said.

“GDP growth fell into negative territory for two years – falling 6 per cent between its high and low points before starting to rise again.”

Between April 2008 and November 2009 there were 6.2million fresh claims for jobseeker’s allowance, according to the Chartered Institute of Personnel and Development (CIPD).

And Ms Coles says there will be an impact this time round.

Ms Coles expects there will be an impact on businesses this time round. She said: "We expect people to alter their lifestyles significantly, which will have an impact on an enormous range of businesses.

"From retailers and those involved in travel and tourism to leisure companies and nurseries.”

But he also warned that if the virus doesn’t come under control the “risk of a prolonged slump remains high".

The government unveiled a package of measures to support businesses through the crisis in the Budget on Wednesday. 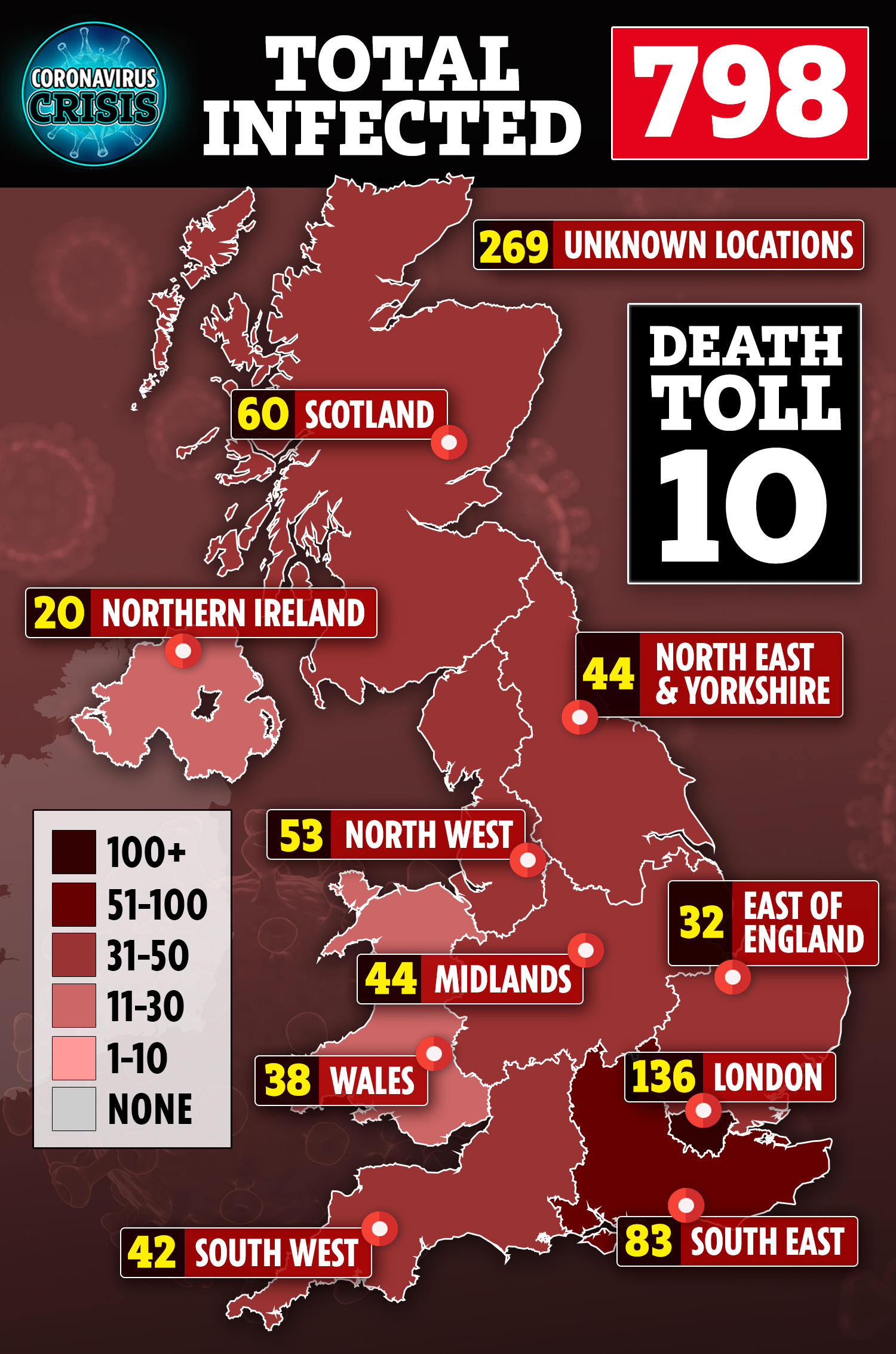 The Prime Minister has decided to keep schools open despite Ireland announcing it would shut its down until the end of March to try and stop the spread.

“This could do more harm than good,” Mr Johnson said in a press conference.

Being able to send children to school means that parents will be able to continue to work, keeping the economy ticking over.

People who have symptoms, such as a persistent cough or high temperature, are now advised to stay at home for seven days rather than the two weeks that have previously been recommended, causing shorter periods of disruption for work.

The measures also ensure those who will suffer a loss of income as a result of having to self-isolate will get sick pay, including millions of self-employed workers, will be able to get sick pay through Universal Credit.

Meanwhile, businesses with fewer than 250 employees will also be able to claim back the cost of providing statutory sick pay due to staff being affected by coronavirus from the government.

Many firms have already implemented plans for staff to work from home to contain the spread of the virus allowing some businesses to continue to operate.

But Leesman, the employee experience index, warns that the UK is one of the least prepared countries to get through mass home-working.

“But the data suggests that many employers and employees will be out of their depth should British businesses be forced into lockdown.”

Ms Coles added: “Life is going to be more uncertain for at least the next few months, so it’s really important to revisit your own financial position.

“One in four people have no savings, and if your safety net isn’t in brilliant shape, it’s worth putting aside whatever you can afford now, to help tide you over if tougher times are on the way.”