Home » Lifestyle » ‘Heroic losers’ chalk one up for the little people

Heroic Losers is an Argentine goat movie. I’m sorry, I’ll try that again – it is an Argentine caper movie. Apparently, cabra is the Latin (and Spanish) word for goat and goats caper, and that’s where we get the English name for a story in which colourful characters perform some kind of crime, or caper. So now you know. 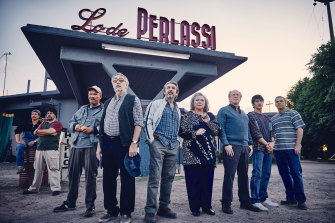 A group of otherwise lawful people from a sleepy town band together to take on a local crook.

Caper movies are hard. They have to be genuinely ingenious, and a detailed plot often overshadows characterisation. But done well, they are always popular. They satisfy everyone’s desire to get away with something scot-free, to equalise the bad luck that makes us all losers. They’re about envy leavened by justice: the person or institution being robbed always deserves it. Who didn’t want to see Andy Garcia go down in Ocean’s Eleven (and Twelve)?

In Heroic Losers, a group of otherwise lawful people from a sleepy town band together to crack a vault owned by a local crook, Manzi (Andres Parra). Manzi stole their money in a corrupt deal with the local bank manager.

Being Argentinian, the movie features Ricardo Darin. He is in all Argentine movies, a bit like Benedict Cumberbatch is in all English movies. Darin’s fame is not based only on his gifts as an actor: he embodies the post-junta disappointment of all Argentinians. He has a lived-in face like Bogart, but with the hooded eyes of a falcon.

He looks like he has seen every kind of betrayal. He’s perfect in the role of Fermin Perlassi, who has persuaded his friends to throw their meagre savings into a scheme to restart their grain mill. Here, Darin’s real son Chino plays his character’s son Rodrigo, adding a sense of optimism.

The film is set in 2001, when the country was in a long recession. Faced with a run on the banks, the government froze all US dollar accounts overnight, hitting millions of small account holders hard, while protecting the banks. Fermin and his pal Fontana (Luis Brandoni) discover Manzi had inside information – and that he paid someone soon after to dig a vault-sized hole on his farm.

The film deals in broad comedy, based on national stereotypes. Fermin’s friends range from wise old dog Fontana to an explosives expert, who is a sandwich short of the proverbial, and two brothers who came down in the last shower. Each has a specific role, based on areas of expertise, as befits a “cabra” movie.

There’s a clear debt to William Wyler’s 1966 classic, How To Steal a Million, but it is acknowledged. Fermin is a movie buff, which is how he figures out the method. It’s an amiable confection with a touch of cold fury at its heart. Most Argentinians will understand the pain behind the comedy.