For those who’ve forgotten, let Gwen Stefani ‘reintroduce’ herself. The No Doubt frontwoman’s new song pays homage to her ska-punk history and her pop superstardom in a song that’s a pure jam.

It’s been a while since the world has been graced by new solo music from Gwen Stefani. For anyone who may have forgotten why Gwen, 51, is considered a pop culture powerhouse, she gave a refresher course on Monday (Dec. 7) with “Let Me Reintroduce Myself,” her first solo song in four years. It’s a reggae-influenced pop bop that bridges her history as a plucky ska-punker from Southern California to her mammoth breakthrough as a pop solo artist. It’s a perfect 101 course for anyone who needs to know why Gwen is such an icon. She even gives a callback to the “Bananas” spelling line in “Hollaback Girl.”

“Homegrown ingredients, that’s what made you mess with me / In the first place (Place), ’cause you know I’m like organic / And it tastes great (Great), I already gave you bananas (Woo),” per Genius.

Gwen’s last album was 2016’s This Is What The Truth Feels Like, so fans were hyped when she announced the “Let Me Reintroduce Myself” on Friday (Dec. 4.)  Gwen rolled out the new music by sharing the single’s cover art. In the artwork, the “Don’t Speak” singer wears a pair of outfits inspired by two defining moments from her music career: No Doubt’s “Just A Girl” video, the 1995 breakthrough hit that made Gwen the new “It” girl; and “Hollaback Girl,” which cemented her as a solo artist in 2005. With 2020 marking both the 25th anniversary and 15th anniversary of these moments, respectively, it appears Gwen wanted to pay homage while taking the next step in her music career. 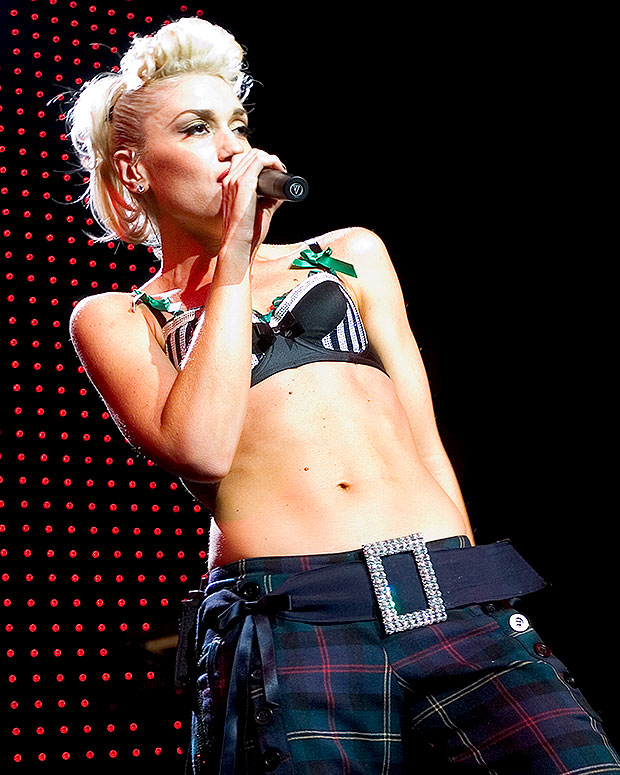 “I honestly … never really was planning to do new music,” Gwent told Zane Lowe on Apple Music. “I mean, I fantasized about it, but I was also like… I don’t know. I always think about artists that I loved growing up, and I think I just want to listen to the songs that I like that they did. And that’s nostalgic for me. Do know what I mean? I don’t really go seek new music from them. So something about that made me feel like why should I do it? I love writing songs. So then I was like, someone had sent me a song that I didn’t know they wrote it for me. I thought that they… I never get songs sent to me, just so you know. I always ask, Can someone send me ‘Umbrella’ by Rihanna?” I would do that song. Do you know what I’m saying?”

“I got sent a song and I actually liked it. And I was like, ‘I love this song,’ she added. “ I went to go record it, because I was like, ‘Shoot. I’ll just go record it, and just see how it sounds.’ And they were like, ‘No, they wrote it for you.’ And I was like, ‘What?’ So then I was like, ‘I want to write with them.’ So I wrote a song with them right before quarantine, the song called ‘Cry Happy.’ And then I didn’t get to record it, because I had to go home and be with the kids. I ran out of time to cook dinner. So then we all went into lockdown, and I was in Oklahoma, and I was really cooking dinner. I mean, we were like 15 people, cooking three meals a day, laundry. Like everybody else, but it was a shock for me. I hadn’t done that in a long time. But then, at that point, I got to go in and record a song. And that was just a flame to the fire. I just was like, ‘I don’t even care if nobody hears this, I got to write some songs.’ So it was almost like I didn’t have anything to say. I didn’t think until I started writing.”

Gwen credits her rekindled songwriting flame to a moment earlier in 2020. She had “gotten really sick” at the start of the years and was watching a lot of documentaries, including Surviving R. Kelly. “It was interesting, because these girls were confessing what had happened to them. And we had gone through the Me Too thing where people were coming and telling their story. But it wasn’t until I saw that documentary and a couple other things that really triggered a lot of the things inside me, because I think that sometimes until you hear someone else say something, and tell their story, you almost don’t want to face your story, or you don’t want to admit your story to yourself. And so I think that during that process of just getting really sick and being forced to shut down, that was one thing that probably triggered me to want to write again.”

“I started with these two songs, and then I went… I was like, I wanted to investigate, when did I start loving music? Music defined me in eighth grade when I heard Madness. That was the record. My brother brought that home and was like, ‘This is what we’re into now.’ I was like, ‘Okay, I’m with you.’ ” Gwen told Zane Lowe that in her search for ska and reggae, she looked up a documentary and found one about the Alpha Boys School in Jamaica, and how the school nurtured the creation of the legendary ska band, The Skatalites. “And the school is still there. And it’s interesting, because I feel like I was in the marching band, I’m a Catholic girl from Anaheim. It was this weird… And I have no business doing reggae music really, but yet it’s so me, and so it defines who I am.”

“And I started thinking about how the world is right now,” she added. “So much racism. It’s always there. And when I discovered ska music, when I was in No Doubt, when I was like 17-years-old, we were all anti-racists, because that’s what ska was in the 70s. It was people from Jamaica coming to England to work, and then hanging out with their neighbors. And it was just a full circle, back to my roots, I know what kind of music I want to make. And I want to make music that makes people feel happy.”

Gwen had some many happy “memories” while reminiscing about Tragic Kingdom‘s 25th anniversary in October. The album, which features “Just A Girl,” helped make No Doubt — and, subsequently, Gwen Stefani — a household name. Gwen reflected on how the band — Gwen, Tim Dumont, Tony Kanal, and Adrian Young  — made such an impact, and how she was grateful for her bandmates and fans, 25 years later. “So many people that I’ve met through the years that have told me that that’s their favorite record. I didn’t even think it would come out, let alone have people would love it and listen to it and it be their favorite.”

“I feel like I’m still just a girl from Orange County, but I have all these blessings,” she added. No Doubt went on an indefinite hiatus in 2013, one year after their (seemingly) final album, Push and Shove. By then, Gwen had already released two solo albums – 2004’s Love. Angel. Music. Baby. and 2006’s The Sweet Escape.

“Let Me Reintroduce Myself” marks Gwen’s first solo, non-holiday music since her third album, 2016’s This Is What The Truth Feels Like. The project received mixed reviews, with Rolling Stone giving it 3/5 stars and saying it has “a rushed feel” to it, a “likable but low-personality version of her familiar bubble-pop solo mode.” Since then, Gwen’s major musical output has been mostly duets with Blake Shelton (“Go Ahead And Break My Heart” in 2016, “Nobody But You” and “Happy Anywhere” in 2020) and a remix of Dua Lipa’s “Physical.” Gwen did release You Make It Feel Like Christmas in 2017, but for fans who have been craving non-holiday music from the No Doubt singer, it’s been a long wait.