GREGGS is recalling more of its vegetable bakes over fears the snack could contain pieces of glass.

The popular bakery chain first raised concerns over the food's safety at the start of May, issuing a product recall. 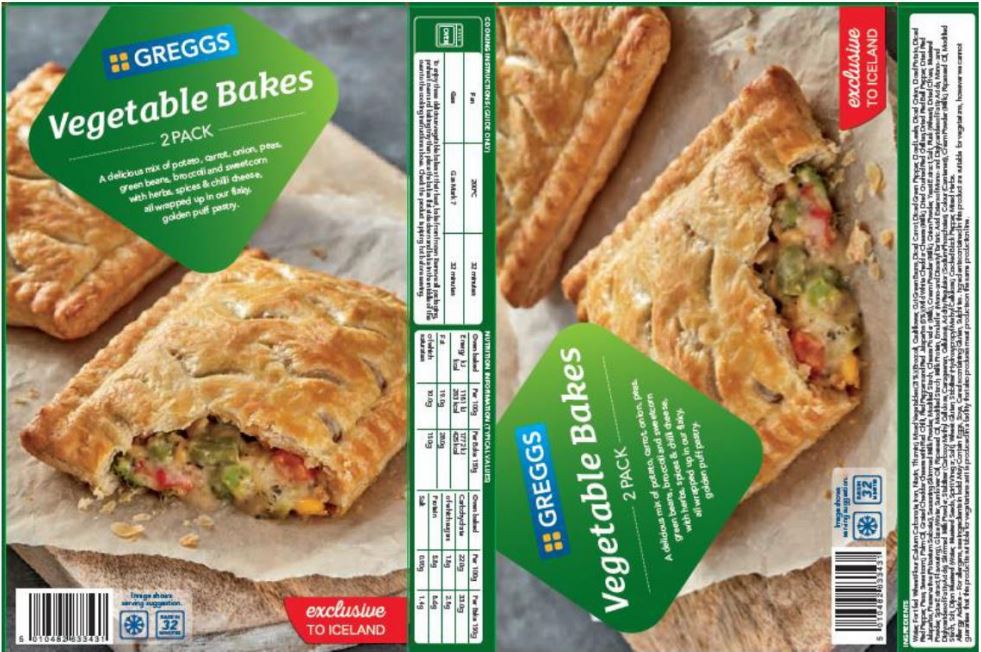 The possible presence of glass naturally makes the bakes unsafe to eat.

The issue affects Greggs vegetable bakes which are sold in Iceland and come frozen in a pack of two, weighing 310g and costing £2.

The product recall has been extended to cover more best before dates.

What best before dates are being recalled?

GREGGS vegetable bakes sold at Iceland are being recalled – here are the 11 best before dates affected that you should look for in your freezer.

The recall also applies to the following 2021 best before dates which were previously announced: August 15, August 28, September 11, September 12 or September 26.

If you've bought the bakes with any of these best before, you should avoid eating them and instead return them to your nearest Iceland store for a full refund.

You don't need to have your receipt in order to get your money back.

The recall only affects the vegetable bakes sold in Iceland stores and not those sold fresh from Greggs' own shops.

No other products, date codes or batches are affected.

PRODUCT recalls are an important means of protecting consumers from dangerous goods.

As a general rule, if a recall involves a branded product, the manufacturer would usually have lead responsibility for the recall action.

But it's often left up to supermarkets to notify customers when products could put them at risk.

If you are concerned about the safety of a product you own, always check the manufacturer’s website to see if a safety notice has been issued.

When it comes to appliances, rather than just food items, the onus is usually on you – the customer – to register the appliance with the manufacturer as if you don't there is no way of contacting you to tell you about a fault.

If you become aware that an item you own has been recalled or has any safety noticed issued against it, make sure you follow the instructions given to you by the manufacturer.

They should usually provide you with more information and a contact number on its safety notice.

In some cases, the manufacturer might ask you to return the item for a full refund or arrange for the faulty product to be collected.

You should not be charged for any recall work – such as a repair, replacement or collection of the recalled item.

In a notice from the Foods Standards Agency which oversees food safety, it said the product could contain small pieces of green glass which presents a safety risk.

Greggs declined to say where the glass has come from and how many packs are being recalled when previously contacted by The Sun.

A Greggs spokesperson said: "The safety of our food is of paramount importance and we take all issues regarding the production of our food extremely seriously.

"We are very sorry for any inconvenience caused."

It followed a similar recall of mini sausage rolls a year earlier.

Ikea is recalling bowls, plates and mugs due to fears consumers could get burned.

Fitness company Peloton is recalling its treadmills after reports of injuries and the death of a child who was in an accident involving the machine.

Meanwhile, Aldi has launched a new sausage and bean melt to rival Greggs' and it's way cheaper.