Australian Grand Prix organisers say Formula One fans have shrugged off fears of coronavirus, with ticket sales for the Melbourne race up this year.

The state government said on Monday that it was not considering cancelling the event – which is less than two weeks away – but would continue to take the federal government’s advice on the unfolding health crisis. 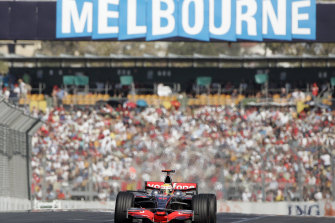 This year’s grand prix is going ahead, despite coronavirus fears.Credit:Rob Griffiths

Minister for Tourism, Sport and Major Events Martin Pakula said the latest advice he had received indicated large gatherings should go ahead, including the grand prix.

“I've got the latest information from both the Commonwealth and Formula One management, and the grand prix is going ahead as planned,” Mr Pakula said on Monday morning.

But Mr Pakula said “there are some elements of this that are out of our hands” and the situation may change if the Commonwealth altered its advice.

The Labor frontbencher insisted ticket sales had increased for this year’s event despite the negative headlines about the coronavirus.

“The latest information from [grand prix chief executive] Andrew Westacott and the team is they're up on last year,” Mr Pakula said.

Mr O’Brien said he was worried about seeing evidence of “panic buying”.

“We’re seeing panicking because the government hasn’t been clear enough about what the risks are and what Victorians need to do to protect themselves.”