BTS lit up the stage at the Grammy Awards on Sunday evening. Although the K-pop group previously performed at the award show, Sunday night was the first time they could show their stuff properly on the Grammys stage. Their super spy-themed performance of “Butter” captivated both new and old fans, lighting up social media with real-time reactions. 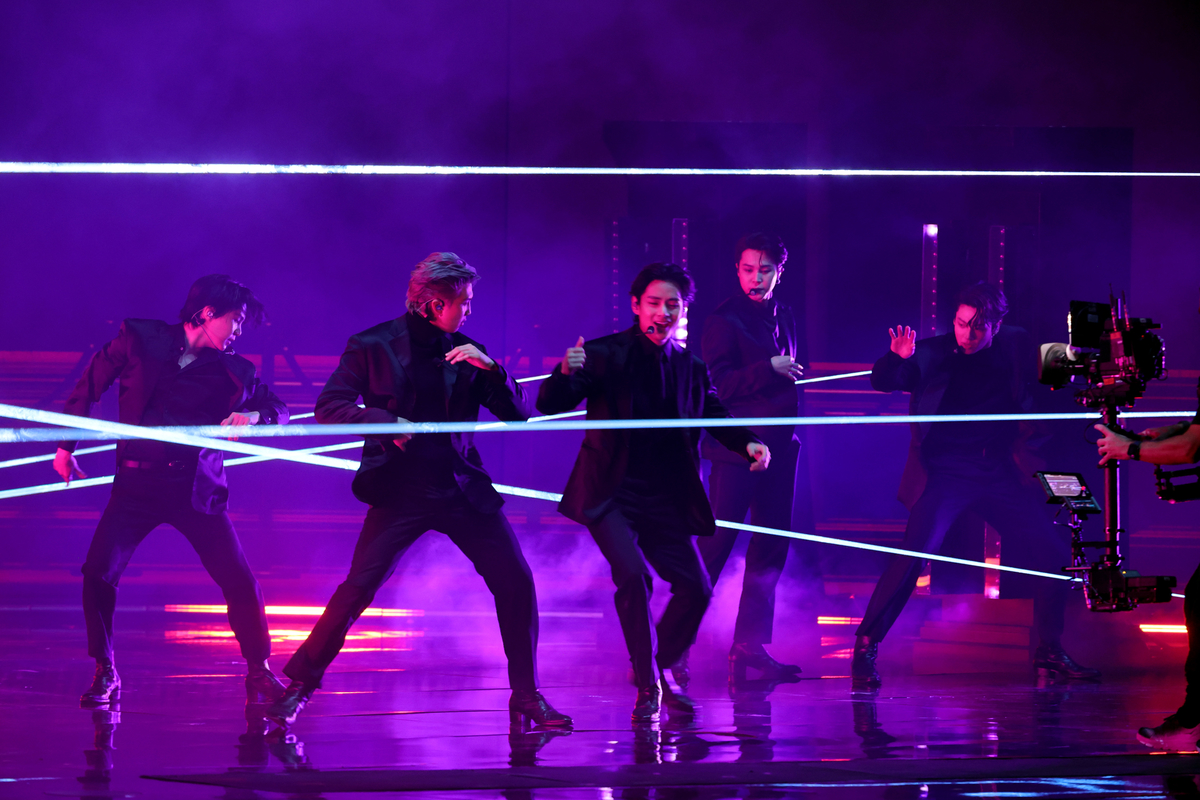 Hollywood may have found their next James Bond

BTS started their Grammy performance with a bit of acting. Jungkook dropped down from the ceiling. Other members, including RM, Suga, Jimin, and J-hope, positioned themselves in the audience. At the same time, V flirted with Best New Artist winner Olivia Rodrigo. Jin handled the groups’ control station, a move that worked well due to an injury preventing him from doing full choreography.

After a dramatic build, V flicked a gold card toward the stage, and the men immediately snapped into performance mode. Wearing slick black suits, they hit every dance move with precision and flair before launching into never before seen choreography.

Six members jumped, twisted, and turned their way through laser beams in a moment reminiscent of Mission Impossible. Once out, they launched into exciting new choreography using their suit jackets as props. At one point, it appeared they connected the clothing items and played them like a guitar.

Jin joined the members center stage for a memorable ending as the group sang, “Hotter, sweeter, cooler, butter/ Get it, let it roll.” The audience gave a rousing standing ovation to BTS.

Those in attendance at the MGM Grand Garden Theater in Las Vegas were not the only ones excited by BTS’ performance. Fans lit up social media.

Current ARMY (BTS fandom) knew their favorite group would kill it before they even took the stage.

Twitter user Fatima wrote, “BTS is the most anticipated act today and will definitely be the most talked about because of their incredible performance and how effing talented they are, and I’m soooo excited for everyone to see them take that stage and put on the best show of the night.”

BTS does have a residency of sorts coming up in Las Vegas. This residency may look slightly different from a smoky hotel lounge. BTS will perform two weekends at Allegiant Stadium on Apr 8-9 and Apr.15-16. Yes, the Allegiant Stadium the Las Vegas Raiders play in. The capacity is 65,000, and BTS sold out all four shows during one presale.

The group members have already enjoyed Vegas during Grammy preparations. They attended Silk Sonic’s residency, went to Top Golf, and even enjoyed some swinging jazz music at a local lounge.

While their Grammy performance may have introduced the K-pop superstars to a new audience, BTS has been at the top of the music industry in recent years. Whether breaking Billboard, YouTube, or Spotify records, BTS’ accomplishments leave little debate that they’re the most popular group in the world.

English language crossover songs like “Dynamite” and “Permission to Dance” have grown their fan base even more during the coronavirus (COVID-19.)

Later in the broadcast, they lost Best Pop Performance Duo/Group to Doja Cat and SZA for “Kiss Me More.” After their show-stopping rendition of “Butter,” the loss felt inconsequential. BTS already won the night.