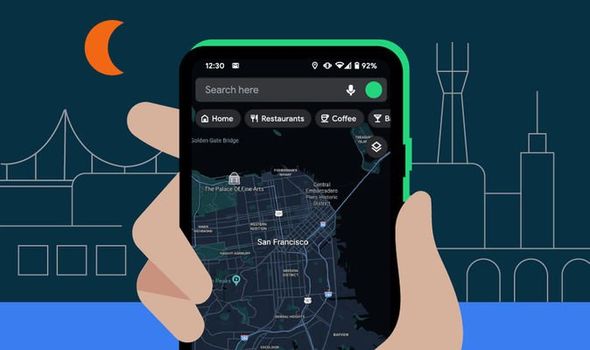 Since 2019 the Mountain View firm has been rolling out dark themes to its suite of hugely popular apps. YouTube and Android Messages were among the first Google first-party apps to receive a dark mode, with Google Maps for years having to sit on the sidelines as other first-party apps got a dark mode ahead of it. But thankfully this lengthy wait is now over with this week the Google Maps dark theme finally arriving in Android.

As reported by 9to5Google, three weeks after the feature was first announced Google Maps dark mode has been rolled out.

The release of the highly anticipated, long-awaited feature was announced by the official Android Twitter account that posted: “What do we want? Dark theme! Where do we want it? Google Maps!

The news means virtually all of Google’s big name apps have a dark mode, with only a few exceptions such as Google Duo and Shopping.

Nearby Share: Android explain how users can use new feature

The Google Maps dark theme affects both the map layer and menu, and features some stylish visual flourishes.

When dark mode is turned on, the sea will appear pitch black with an outline for adjoining land or bridges that run over the water.

Other changes include UI elements being changed to light grey or pale blue colours from white and a darker shade of blue.

If you have the system wide dark mode already turned on then when you open Google Maps up the app will prompt you to turn dark mode on.

And you can toggle the feature on or off by heading to Settings > Theme.

You’ll be able to choose from a few different options, either to have Google Maps always in light theme, always in dark theme or same as the device theme.

Google announced at the end of February that dark mode was at long last coming to Google Maps. 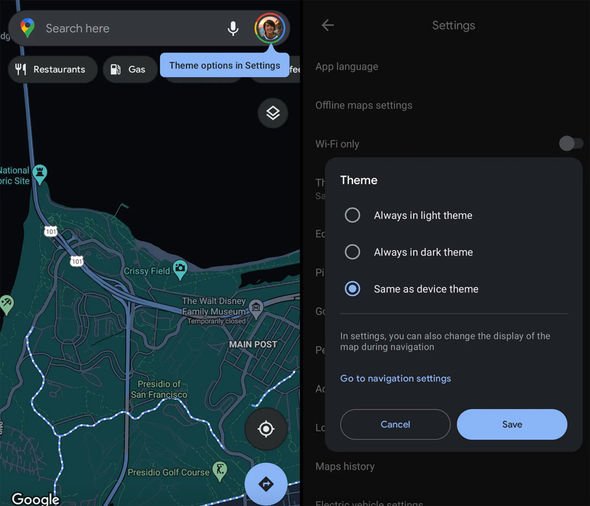 In a post online Google said: “These days, we’re all experiencing a bit of screen fatigue.

“With dark theme in Google Maps soon expanding to all Android users globally, you can give your eyes a much-needed break and save on battery life.

“Simply head to your Settings, tap on Theme and then on ‘Always in Dark Theme’ to lower the lights when you’re navigating, exploring, or getting things done with Maps.

“Change your mind? Just tap on ‘Always in Light Theme’ to switch it back.”