The Giants made a winning start to life without injured Diamonds goal attack Kiera Austin as Collingwood paid dearly for a poor first half in Sydney on Saturday.

Austin’s teenage replacement Sophie Dwyer looks up to the challenge after a solid display alongside English shooter Jo Harten in the 66-54 win over the Magpies at Ken Rosewall Arena. 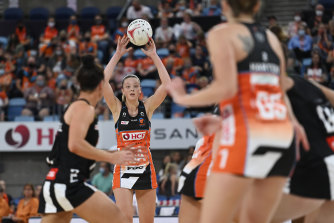 Sophie Dwyer makes a pass for the Giants against Collingwood on Saturday.Credit:Getty Images

The home side, now 2-0, built a 20-goal lead before holding steady against a second-half fightback.

Giants centre Jamie-Lee Price was a force with 19 assists as Harten shot 33 of 35 goals and made four super shots. Magpies playmaker Kelsey Browne led her side with 21 assists as Jamaican shooter Shimona Nelson had one of her best games in black and white, shooting 40 of 43 goals.

“We were lucky enough to make a good start but we let go a bit in that second half so we have plenty to work on,” Price told Nine.

The Magpies, now 0-2, were without English defender Geva Mentor (back) and mid-court starter Molly Jovic (foot) due to short-term injuries and struggled to find their best combination until the second half.

Magpies coach Nicole Richardson moved to a centre-court combination of Browne at centre, Ash Brazill at wing defence and first-gamer Maggie Lind at wing attack in the third term after 20 turnovers and indecision hurt the side in the first half.

The Giants made a match-winning run in the last five minutes of the second quarter with Harten scoring multiple super shots to push the margin to 38-21 at half-time.

“You can’t give a team like the Giants an 11-goal lead at quarter-time and expect to get back into the contest,” Richardson said. 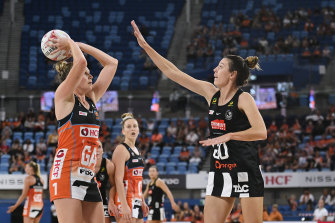 “The positive is that we ended up losing by 12 goals so we were much more competitive in the last three quarters. We did get caught out late in the second term, we were leading the quarter prior to the last five minutes but I think the Giants are the best team in the competition at capitalising on that super shot and it let them push that lead out.”

Richardson plans to have Mentor and Jovic back for next week while Hind may have won herself more opportunities due to her quick passes to Nelson.

“Maggie Lind has a really good connection with Shimona, she has the confidence to let the ball go quickly to Shimmy who got up and ripped those balls in,” Richardson said.

“I think that resonated with the rest of the team and Kelsey was able to let the ball go quicker as well.”

The Giants handed debuts to Amy Sligar and Annie Miller, with Sligar showing no nerves after starting at wing defence and sending a long pass to Harten for her first assist.

The Melbourne Vixens will look for their first win of 2021 when they host Sunshine Coast Lightning at John Cain Arena on Sunday at 1pm (AEST).