Mary McAleese revealed she was unimpressed by a joke made by Pope John Paul II when they first met.

The 69-year-old who served as President from 1997 until 2011, reflected on her upbringing and career in a discussion with Miriam O’Callaghan at Focus Ireland’s International Women’s Day event.

According to Evoke, she cited her first meeting with Pope John Paul II as one of the many encounters with sexism that she experienced during her time as leader.

Mary said that the head of the Catholic church joked about her husband Martin McAleese, being married to the President instead of taking charge with the role himself. 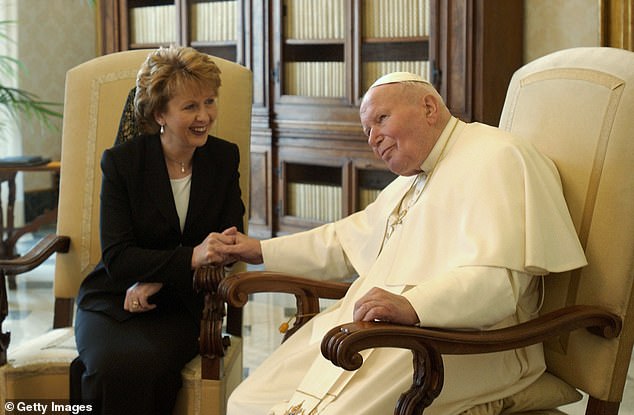 She explained that it wasn’t unusual for people to make sexist comments but she demanded an apology, which the Pope was willing to give, while blaming a language barrier for the joke causing offence.

Mary said her husband knew better than to be amused by Pope John Paul’s comments, saying: ‘He kind of looked past me and put out his hand to Martin and I suppose this was the joke he had prepared, it turns out.

‘He said to Martin, “Would you not prefer to be President of Ireland rather than married to the president of Ireland?”. Martin nearly collapsed on the spot. He knew better than to take the hand because he wouldn’t be at the house now if he did.’

She then gave her hand to introduce herself to the Pope, while offering an explanation that the people of Ireland elected her. 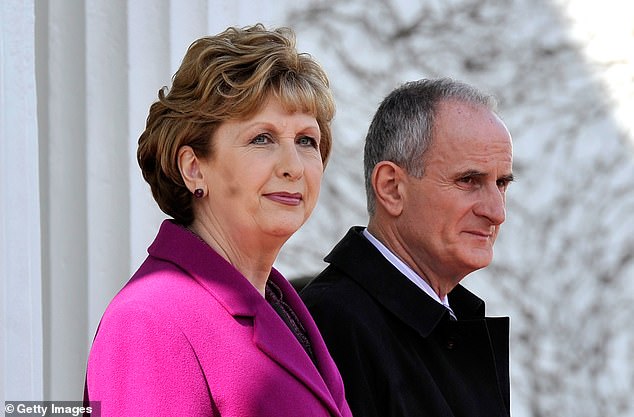 Mary explained the Pope joked about her husband preferring to be President instead of married to the leader. Pictured: Mary and her husband Martin

Moving into the study, she told Pope John Paul II that the joke was ‘unacceptable’ and argued he wouldn’t have said anything similar to a woman if the President was a man.

Mary said the Pope was apologetic but she didn’t think the joke was funny and claimed she had similar experiences ‘a lot with senior church men’.

The former President revealed she had a difficult upbringing and faced challenges before achieving the highly respected role.

She told how her family had to sofa surf with relatives after losing their home due to the Troubles in Northern Ireland. 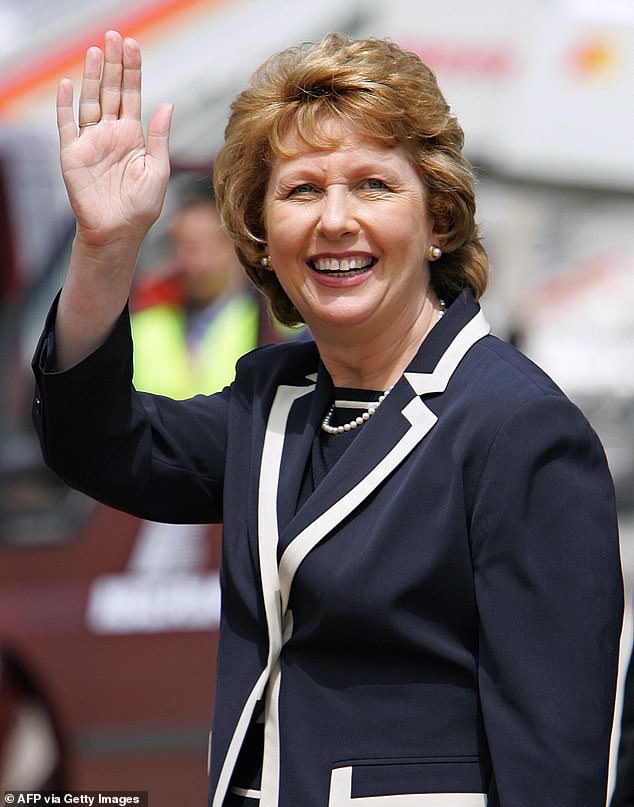 And said the reaction from a Parish Priest when she announced wanting to become a lawyer, was her first memory of sexism.

She added that the first book she read while studying law titled ‘Learning The Law’, was also sexist and said the attitudes are internalised at many levels, holding not only women back from progressing.

In 2018, Mary was reported in Mail Online speaking out about the lack of ‘strong role models’ in the church who women can look up to.

She said the Church’s ban on a female priesthood had ‘locked women out of any significant role in the Church’s leadership, doctrinal development and authority structure’.

The Church teaches that women cannot be ordained priests because Jesus chose only men as his apostles.

‘How long can the hierarchy sustain the credibility of a God who wants things this way, who wants a Church where women are invisible and voiceless in Church leadership?’ Mary said.