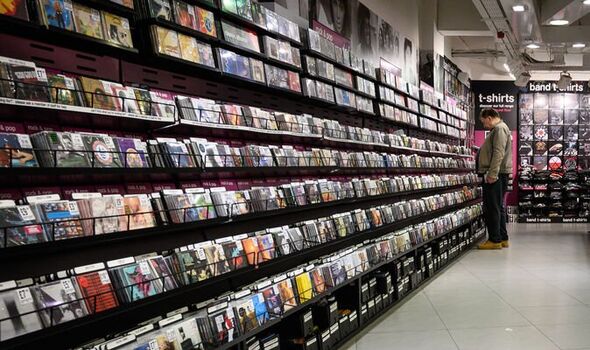 The band might have been older rockers, but their Brothers In Arms album was the first to be recorded totally digitally, quickly becoming a best-selling byword for the new technology. The shiny silver CD, powered by laser technology, was the perfect vehicle for this new way of making music. They were also marketed as the perfect way to listen to music and they quickly became as essential in 1980s British homes as the sandwich maker or Sega Megadrive.

Having quickly obliterated the sales of vinyl and its successor the cassette tape, a new CD became the easiest affordable Christmas present for friends and families.

But even by 2004’s record-breaking sales year, the format was in trouble – digitally downloaded music had arrived via Apple’s iPod three years earlier, Spotify introduced streaming in 2008 and the CD was soon looking as redundant as VHS.

As the CD celebrates its 40th anniversary, the shiny silver marvel is enjoying a comeback of sorts. And it’s not being led by ageing ex-yuppies. Instead, like the vinyl revival that began a decade ago, the CD is coming back thanks to today’s generation of switched-on youngsters.

In Britain, some 14 million were sold, down 12 percent on 2020 but with the lowest drop in three years amid predictions sales will stabilise and even grow.

The CD was launched in August 1982 after three years of technological co-operation between electronics giants Philips and Sony.

When work began on the Digital Audio Compact Disc in 1979, the laser technology required to play it hadn’t even been finalised.

Cassettes used magnetic tape and the music played through from left to right. Once one side was done, you flipped it over for more songs on the other side. CDs soon became more popular because you could skip directly to the song you wanted to hear, a convenience unbeaten until the rise of streaming sites like Spotify (which now has more than 90
million tracks available).

Four decades on, fears over the rising price of newly fashionable vinyl (and a shortfall in manufacturing sites worldwide) is causing music fans to return to the CD – meaning vinyl could be squashed all over again by the format designed to replace it.

Paul Sinclair, editor of the website SuperDeluxeEdition, devoted to highlighting physical music, said: “Young people like to react against the norms. A decade ago, vinyl was attractive to a new generation because it was something different.

“But CDs are now light years ahead of vinyl for affordability. You can still pick up loads of CDs in charity shops for 50p or £1. If you’re passionate about music and want to build a physical collection quickly and cheaply, there’s no competition.”

There’s even a popular Twitter account, Vinyl Stupidity, devoted to highlighting ridiculously overpriced records, both new and second-hand. Thomas Browne, who launched the account in 2016, says: “You have an incredibly hard time finding vinyl bargains now because everybody knows a little about collecting.

“People can whip their phone out to find out how much a record is worth, so the game has changed a lot. But the second-hand CD market is still relatively sane. You can be a kid in a candy store if you want cheap CDs.”

It’s IRONIC that, with new records now costing £25 to £35 compared to £10 on CD, vinyl is more of a luxury item than its successor. Events like the UK’s Record Store Day have attracted big queues to shops and made limited edition releases highly collectable.

Sony and Philips initially intended the CD to hold an hour’s music.

But they envisaged the CD would appeal to classical rather than pop fans, thinking they’d more easily be able to afford the pricey £15 CDs. Legendary composer Herbert von Karajan was persuaded to endorse the CD but he had one condition: the CD had to be able to play all 74 minutes of Beethoven’s Ninth Symphony.

Although the first disc sold was Abba’s latest album The Visitors, classical music did dominate sales at first.

That changed in 1985, when Brothers In Arms was released. Dire Straits’ fifth album was the first to be recorded without traditional studio tapes.

Its digital clarity soon made it the default album for stores to tempt customers into purchasing a CD player. The relationship was cemented when Philips sponsored Dire Straits’ world tour.

Within three years, CDs had overtaken vinyl sales, helped by technology advances that meant a new disc player cost under £100.

“That’s a factor in why the CD revival is coming,” believes Thomas Browne. “If you have a £50 player, a CD will sound pretty good. On a £50 turntable, which looks like a suitcase, a record will sound terrible.”

When CDs were at their height, they seemed a licence to print money: they cost 75p to make, but sold for £15. Some believe the music industry didn’t do enough to protect those
lucrative sales.

Paul Sinclair explains: “One of the big reasons people bought CDs was to play them in the car. A lot of CD fans still enjoy doing that, but only if their car is old enough to have a CD player.

“Music bosses did nothing to lobby the motor industry to maintain keeping CD players in cars. The sales drop-off wouldn’t have been so dramatic if they had.”

The industry also got it wrong by pitting CDs and vinyl against each other.

“When CDs first came out, they were championed on the basis there were none of vinyl’s negatives: no clicks, pops or skips,” says Paul.

“Consumers were told that those would disappear if we invested in CDs and a generation bought into that.

“There’s a lot of talk now about the ‘warmth’ of vinyl’s sound, which CD lovers don’t believe is true – not least because the industry said the exact opposite 35 years ago. Then, it was all, ‘Forget vinyl and buy CD’. Fans were told to ditch their records and buy them again on CD. But, since vinyl sales rose and made a profit again, the industry message has reversed again. All they talk about is vinyl.

“Well, which is it? It’s weird they keep championing one format over the other, when they should get the message out that both CD and vinyl are great.”

A spokesman for the BPI – the industry’s trade association – said: “The CD looks like remaining an important part of the mix for years to come, in terms of how fans discover, enjoy and collect music.”

The BPI emphasises how important combined CD and vinyl sales are, revealing: “Physical purchases accounted for over half of sales for the No1 album in 40 of the 52 weeks in 2021.”

There are pros and cons of vinyl and CD for their environmental impact.

At 5in diameter, CDs are under half the size of 12in vinyl, so they use less material, taking up less shipping and stockroom space.

But as music environmental charity Music Declares explains, vinyl is more likely to be kept and repeatedly owned, whereas CDs more often end up as landfill (in January 2008, EMI admitted shipping one million unsold Robbie Williams CDs to China where they would be ground down and used in road surfacing materials).

As a mix of plastic and metal, CDs are also harder to recycle, though Music Declares insists: “CDs can be recycled easily enough.” Thomas Browne hopes he won’t have to launch a sister CD Stupidity account on Twitter to match Vinyl Stupidity. He said: “I like really daft examples of over-priced vinyl. You can’t move for second-hand copies of Paul McCartney’s ’80s album Pipes Of Peace.

“But because he used to be in The Beatles some people think, ‘This must be rare’ and try charging £80.

“You’re lucky to get a fiver for it. I love it when people try to charge £300 for a Reader’s Digest compilation of the world’s best waltzes because they think, ‘Wow, vinyl is back
in fashion’.”

CDs have a way to go to match their sales of the early 2000s. But with no new physical way of owning music since their development, it’s no wonder the CD revival is coming. So long as CDs are still made, it looks like music fans will keep buying them, perhaps for another 40 years.