Fifth of wildlife habitats worldwide have been destroyed since 1700 due to climate change and humans clearing land for towns and farms, study finds

Natural habitat of the world’s animal species has been slashed by almost a fifth (18 per cent) since 1700 due to human activities, a damning study has found.

University of Cambridge researchers used historical analysis to track the loss of areas over time and found the main drivers were climate change and deforestation for urban development and agriculture.

The trend is set to continue, the experts warn, with habitat loss set to reach 23 per cent by 2100 under a worst-case scenario for greenhouse gas emissions. 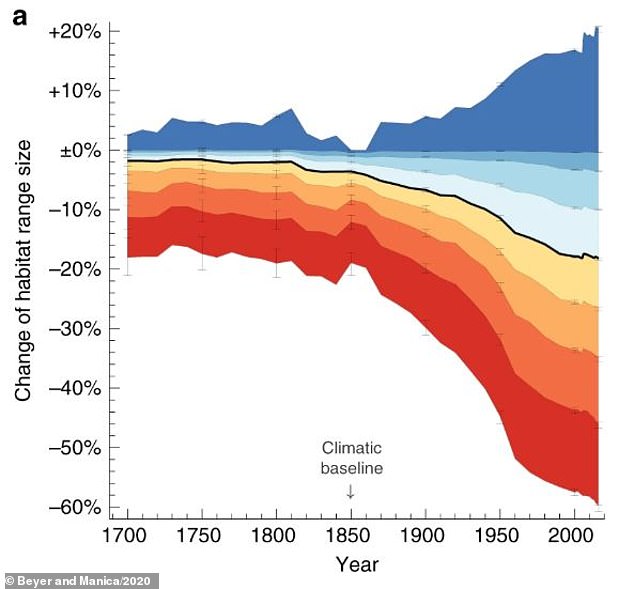 This graph shows the data which led the researchers to the conclusion that, on average, 18% of habitat has been lost since 1700. The black line shows the average decline for all species types, and the coloured areas show the variation. So the top 10% of species (dark blue) have seen an increase in habitat of around 20%. But some species, including the bottom 10% (dark red) have lost more than half their habitat area since 1700 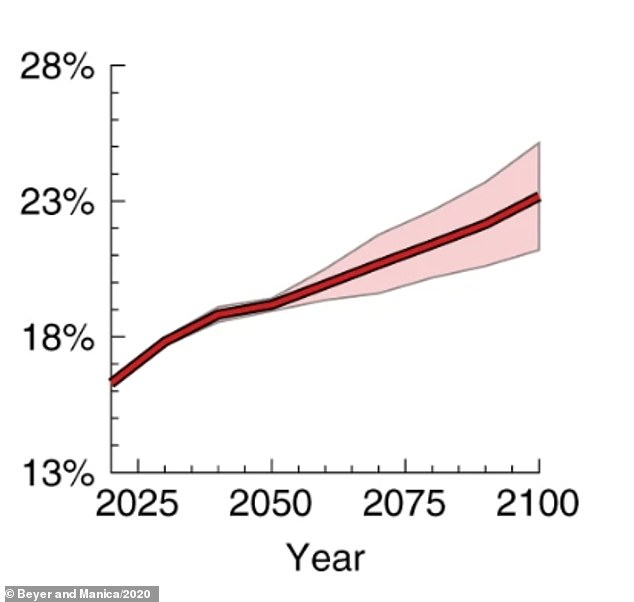 The trend of habitat loss is set to continue, the experts warn, with the global habitat loss set to reach almost a quarter (23 per cent) loss by 2100 under a worst-case scenario for greenhouse gas emissions (pictured)

Animals at risk: Loss of habitat by species, according to researchers

Mammals, birds and amphibians have lost on average 18% of their habitat worldwide since 1700, a Cambridge University study suggests.

The amount of natural habitat range that has been lost varies by species, according to the researchers’ estimates.

The size of an animal’s habitat, by geographical range, is a strong predictor of a species’ vulnerability to extinction. The smaller it is, the more likely the animal is to die out.

The study, published in the journal Nature Communications, analysed changes in the geographical range of 16,919 species from 1700 to the present day.

Data was also used to predict future changes up to the year 2100 under 16 different climate and socio-economic scenarios.

The study’s first author Dr Robert Beyer, of Cambridge’s Department of Zoology, said: ‘The habitat size of almost all known birds, mammals and amphibians is shrinking, primarily because of land conversion by humans as we continue to expand our agricultural and urban areas.’

The amount of habitat loss varies, with 16 per cent of species having already lost more than half of their estimated natural range.

This figure could rise to 26 per cent of species by the end of the century, according to the research.

Species’ geographical ranges were found to have recently shrunk most significantly in tropical areas, where for instance rainforest has been cleared for oil palm plantations in South East Asia and for pasture land in South America.

This is impacting endemic species which already have small and restricted habitats, amplifying the issue.

‘The tropics are biodiversity hotspots with lots of small-range species,’ said Dr Beyer.

The Government’s failure to meet conservation targets has resulted in British wildlife suffering a ‘lost decade’, with many species close to extinction, the RSPB warned.

Not enough investment has been made to protect nature, the charity said, while the UK was not meeting international goals for protecting land and sea habitats.

Analysis from the UK Government of progress towards international goals agreed in 2010 claim it has met or exceeded only five of 20 targets for this year.

However, an independent assessment by the RSPB has suggested that the UK is actually performing even worse than in the official analysis.

In fact, they warned, the Government has made either no progress or has been going in the wrong direction in six of the areas.

‘If one hectare of tropical forest is converted to agricultural land, a lot more species lose larger proportions of their home than in places like Europe.’

The research suggests that climate change will have an increasing impact on species’ geographical ranges.

Other studies have predicted that without climate action, large parts of the Amazon may change from canopy rainforest to a savannah-like mix of woodland and open grassland in the next 100 years.

‘Species in the Amazon have adapted to living in a tropical rainforest,’ said Dr Beyer.

‘If climate change causes this ecosystem to change, many of those species won’t be able to survive – or they will at least be pushed into smaller areas of remaining rainforest.

He added: ‘We found that the higher the carbon emissions, the worse it gets for most species in terms of habitat loss.’

Reducing the amount of agricultural land around the world by introducing new policy measures could help, the research suggests.

These could include encouraging people to eat less meat, and stabilising population growth.

Professor Andrea Manica, of Cambridge’s Department of Zoology, said: ‘Whether these past trends in habitat range losses will reverse, continue, or accelerate will depend on future global carbon emissions and societal choices in the coming years and decades.

‘While our study quantifies the drastic consequences for species’ ranges if global land use and climate change are left unchecked, they also demonstrate the tremendous potential of timely and concerted policy action for halting – and indeed partially reversing – previous trends in global range contractions.

‘It all depends on what we do next.’